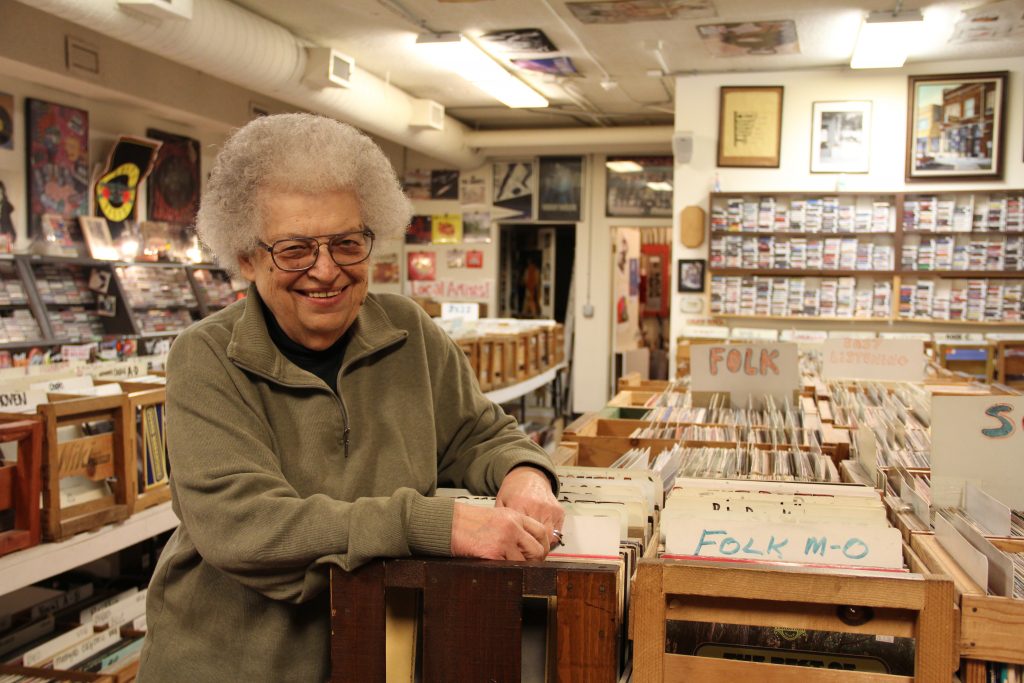 Val Camilletti. The name is synonymous with the music industry. If you don’t know it, you should. Val is the owner of Val’s halla Records in Oak Park. The store is celebrating its forty-sixth anniversary this weekend (July 28 and 29), which in the age of Amazon is more than a feat, it’s a miracle.

Val won’t be celebrating her hallaPalooza in person this year. After years of battling cancer, she now rests in the great hall of heroes for which the store is named. This year’s hallaPalooza will now be the most important in the store’s history.

If you spent any time in the store, whether at its old location on South Boulevard or its current one at 239 Harrison, it’s easy to understand what kept visitors coming in. The vast array of records, CDs, tapes and videos, as well as its shrine to Elvis Presley (lovingly housed in the store’s washroom, in honor of the King’s last moments), are all a part of the Val’s experience. The key components are the people who are there: Val and Shayne Blakeley, who’s been Val’s right-hand man for seventeen years.

Val started her music career at Capitol Records in 1962, when the company had a branch in Chicago. She often told the story about what it was like to be there in 1964, receive a 45 of “I Want to Hold Your Hand” at her office and put the needle on the turntable to hear the Fab Four’s harmonies for the first time. When no one in the country knew who these lads from Liverpool were, Val recognized that they were special; soon the world would, too. To Val, The Beatles were her band. She even made the decision to skip going to their concert at Comiskey Park because she said no one would be able to hear them play over the screams of thousands of young women. She was right. Yet Val didn’t just love The Beatles, she loved music, and dedicated her life to helping others love it too—helping you finding just the right record, knowing the song you were looking for just by hearing you sing a few of its lyrics, and giving bands the chance to play on the store’s stage.

If you caught her on a slow day at the store, she’d tell you stories; she had enough to fill a library. I had the great pleasure of talking to Val about the late, great Shel Silverstein a few years ago. I was working on my master’s thesis about his work and Val had seen him perform live. To this day, I find it lovely that she didn’t know him for his poetry or his plays; she knew him for his music, an aspect of his illustrious career that not many are familiar with.

Shayne is very well-versed in musical genres, too, and easily plays musical six-degrees-of-separation. He and Val were like a great superhero duo that solved people’s musical problems. Shayne hopes to continue this work, even in the absence of the store’s fearless leader.

For forty-six years, Val’s halla Records has been part of the fabric of Oak Park, and music lovers across the Chicago area and beyond have flocked to it time and again to sift through bins in search of gold. Even former employees head to their old stomping grounds, and especially during the anniversary weekend. How many bosses can say that dozens of their former employees care about them and their work so much that, even though they’ve left their jobs, they come back and volunteer to work for them again, for old time’s sake? I’d place a bet that the number would be minuscule.

Val worked from the heart. She treated others with compassion. She welcomed customers and four-legged friends into her store. Her employees became family. All these characteristics created bonds between her and an unfathomable number of people (and pets). This became evident, in no small way, as former employees and friends gathered at her care facility over the past few days to spend as much time with her as they could. “She’s kind of a big deal,” some would say as nurses looked at the flock of folks gathered in her room and in the hallway, waiting for their chance to see her, hold her hand and be in her presence once again.

Val Camilletti was an inspiration. If you stop in her store this weekend, you’ll see what all the fuss is about. Chances are you’ll find more than just a record or two. Chances are you’ll find a community of music lovers supporting one remarkable woman’s dream. Through her passion for music, Val inspired others for nearly half a century. Hopefully, with a lot of luck and community support, her legacy will live on in the hallowed halls of her beloved record store for many more years to come.

Val’s halla Records is open Monday-Saturday, 11am-7pm, and Sunday 11am–5pm. In lieu of flowers, please visit the store this weekend, celebrate Val and enhance your music collection, or make a monetary donation to the store. To see the full lineup of live performers for hallaPalooza, or to learn more about the store’s history, visit valshallarecords.com.