The number of women thriving in Chicago hip-hop is an old story now; the larger one, I think, is that our hip-hop community is just that: an actual community, one whose members form a network of inspiration invitation, collaboration and support, creating an environment that encourages new voices to emerge. So it comes as no surprise that many of our premier hip-hop artists made their debuts as teenagers, or that today, there’s a new crop of very young artists making their mark on the genre (Ric Wilson, CupcakKe, Adamn Killa, Ravyn Lenae).

Jean Deaux (pronounced John Doe) has been around a few years, coming up through the ranks via spoken-word performances and honing her skills with memorable guest appearances on other artists’ tracks. Just twenty-three, she’s an artist with a highly distinctive point of view and a restless creative drive, assimilating popular styles and genres like they’ve been waiting around for her to discover them. She’s even tacked a couple of video-directing credits onto her résumé. A solo EP is due this year, which might officially cap 2018 as the year of Jean Deaux. 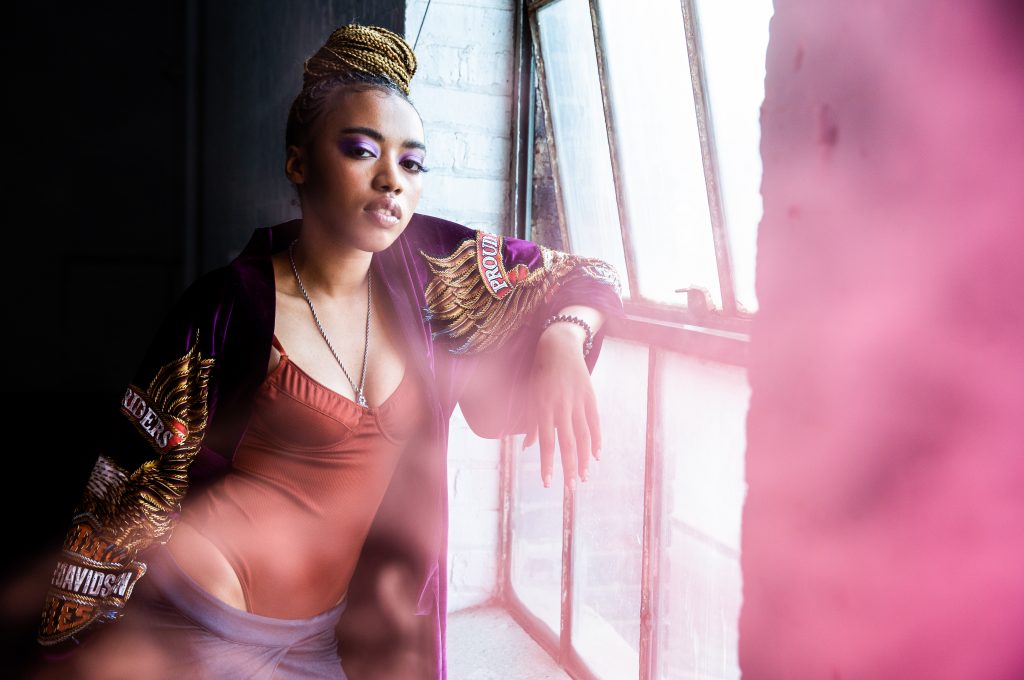 I talked to her about her road to where she is now, and about where this fiercely gifted artist—again, still very young—is headed next.

You grew up on the West Side, in North Lawndale. Did you have a big family? Was it a musical childhood?
Our family was close-knit. I grew up in a house with my mom and my grandfather the first several years of my life. It wasn’t musical at all, surprisingly. But I vividly remember there being an old piano in our house I played with a lot as a child. I believe it belonged to my great-grandparents. Although I don’t know if either of them played, really.

Did you always know you wanted to make performing into a career?
No, actually, I was interested in writing and public speaking. I love learning, so I was game to study anything in college. A hobby of photography and film run in my family; I picked up on videography and editing at thirteen. So I thought I’d go to school for that, and then a company offered to invest in my writing and musical abilities and it kind of found me.

Let’s talk about some of the people in your life who influenced you: your cousin John Walt, Brother Mike, Saba.
I’ll put it this way. Brother Mike created a space that helped me cultivate my crafts. That space also reconnected me and my cousin John Walt again after childhood. He was always older, so we spent less time together before hanging out at YOUmedia (and Brother Mike’s open mic). The day I first saw my cousin John Walt performing there, he introduced me to Saba and Joseph Chilliams, who were also my cousins that I had never met. For lack of better words, this was pivotal in my life. Saba and Joseph’s basement is where i found myself as an artist. Saba and Pivot Gang were the first musical family members I knew. I knew I found my sound there. But I found my voice working with my brothers Kembe X and Alex Wiley. They had me in a studio at fourteen, I had to sneak out and errrthing.

What was it like being in hip-hop circles when you were so young? And is it true that you still had braces when you started recording with Saba?
Ha! It was amazing. To this day, I think I’ve been a part of the most legendary and historic renaissance this city has seen. We’re a melting pot of beautiful artists from the city that raised us. And yes, unforgettable sis—me—had braces until twenty.

Let’s talk about a couple of milestones, and where they led you: Your first group, The Village; your first mixtape, “Soular System Vol 1.”
Ha! We’re really flowing with these questions. Kembe X and Alex Wiley created The Village—the first collective I was ever affiliated with. Then I found Pivot, Pivot led me to my first deal of sorts. And then that deal funded “Soular System.”

“Soular System” took me two-plus years. It was intense and so much pressure, because my city thought I was next. I was still a baby. Getting my rhythm. This upcoming project is a reintroduction, for sure. Same girl, new bars.

You’d pretty much established yourself as a rapper when you introduced a new element to your performances: R&B-style singing—which showed a whole new side of you. Have you always been a singer, or is it something that you grew into?
I definitely grew into my singing. Very late bloomer. Which is why I’m patient with myself as a vocalist, but still challenge myself both in studio and performing. I still get so anxious wanting to give people shows they deserve. But R&B was the cornerstone to my life, childhood even.

How do you keep your fans loyal when you take sharp left turns like that (rapping to singing)? Or is that itself the thing that keeps them loyal—that you’re taking them on this adventure with you?
Man, God bless my listeners. Anybody that knows of me knows I’ve never limited myself. I’ve never conformed to any one thing. I’ve been called singer, rapper, poet. Everything. I don’t claim any one, but I won’t deny it. I’m all of those things at once.

You’ve directed two videos for Smino (“Anita” and “Wild Irish Rose”). How did that come about?
Smino and I have been close for so long, we’re best friends aside from everything else. So naturally I’ve shared countless ideas with him, he sees my potential as a director, and fortunately took the chance on giving an amateur an opportunity to bring his art to life. Im honored to have worked with him on those visuals and I look forward to working with him more.

I’ve heard you credit your uncle with your interest in photography; is that the source of your interest in film? And will you be directing more videos?
I think I picked it up naturally, but he and my grandfather have definitely nurtured it. I learn from them. They both have incredible talent and poise in their work so I admire them in that light. And yes, not only videos, films, commercials, and TV shows eventually.

You’re extremely versatile and extremely prolific. And you’ve talked in the past about not just continuing to write songs for yourself, but writing them for other people. Is there a difference in how you write for yourself, as opposed to other people?
No. I think the power of music is its infectious repetition and relatability. We connect with artists through reflections they leave in music. People love artists they can see themselves in. So I approach every song the same, raw, honest, and vulnerable as possible. 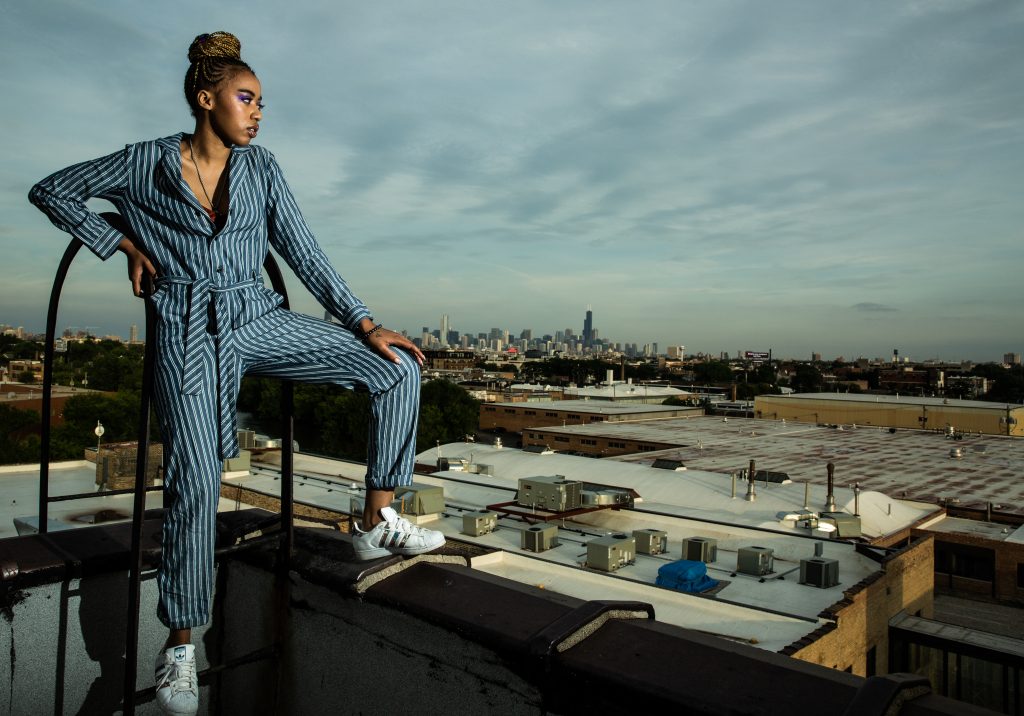 You’ve had a pretty amazing run of singles lately, and they have a pretty wide range; like the R&B and soul flavor of “Wikipedia,” the EDM groove of “Energy,” and I hear you’re working on a punk-influenced tune now. In each case you take something from these other genres and absorb it into your own persona. Are you searching for something or are you just having fun?
I’m just having fun. That was my goal with this upcoming project. When I lost John Walt—last known as Dinner With John, for reference—I vowed to myself to make music that made me happy. Music that I could be proud of. “Soular System” was so dark and moody, I can’t afford to be in that place right now.

You’re at a stage where you’re established in Chicago, you’ve got a following, you’ve got a team. Are you ready to break out on an international scale?
Am I? Do I? Ha. Hey the inter-nations will have to tell me. It’s all up to God, honestly. But I’m honored to be held up to an important standard.

What can we expect to see from Jean Deaux in the next year and beyond? There’s an EP in the works, I hear.
Growth. Exponential growth. And yes… Sis is coming. You didn’t hear it from me, though.

Finally: a young Chicago woman, in her teens, has a headful of rhymes and wants to pursue a career in hip-hop. What advice do you give her?
First of all, DON’T LET THESE MEN BREATHE FOR A SECOND. When you go hard, come back, go even harder. Don’t let nobody intimidate you, and keep your circle full of trustworthy people who believe in you. Don’t let negativity bury you longer than a day; you are worthy of all of the life there is to live. You know it.