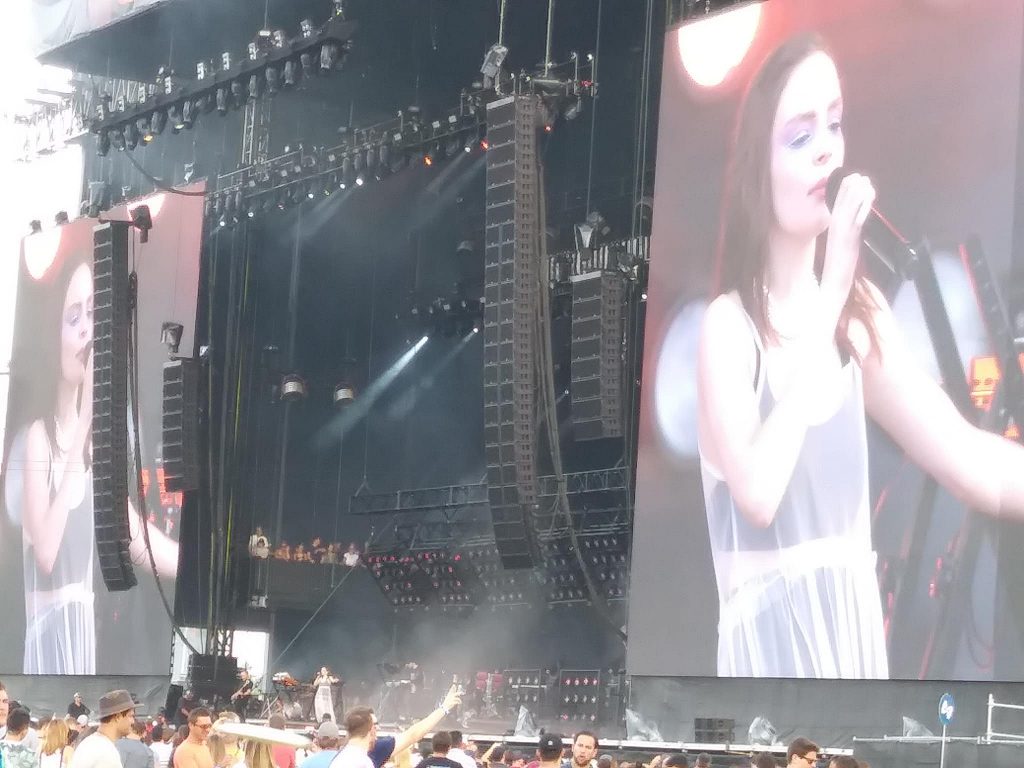 I somehow made it to Grant Park by noon on Thursday, and I figured I’d be remiss if someone whose secret identity is DJ Craig Reptile missed the DJ duo LZRD, so I embraced their pyramonster with the elliptical pupil symbol and overlooked their consumption of the infestation known as vowel deficit syndrome. More important was the music, and they dropped hot beats off the Perry’s stage and worked youngsters spry enough to pack their front end with bouncing bodies into a frenzy. I didn’t think LZRD brought a lot of innovation to the whole Electronic Dance Music thing, but they did engage their audience and got the noon hour off to a rousing start, providing intriguing wrinkles to recognizable tunes.

Slaves, or Slaves UK as they are forced to call themselves in the states, were the real justification for my early arrival, and a lone dose of authentic old-school punk rock-n-roll in an otherwise “indie rock”-filled day for me. Another twosome, their drummer (and lead singer) joked that no one else wanted to be in a band with them; just one nugget of self-deprecation that was a through line in their lyrical and stage-banter approach. Just as LZRD aren’t reinventing EDM, Slaves aren’t reinventing punk. But their songs are loud, compelling, tuneful and rocking, so much so that it would have been tempting to see them at their Empty Bottle after-show (which they plugged) if they weren’t going on so late. Slaves make an amazing amount of sound with just a stand-up drummer and guitar or bass, and I can’t imagine how loud a show at the Empty Bottle would be. They turned a song called “Girlfight” into an epic replete with a lengthy introduction in which the drummer journeyed into the crowd to provide a completely unnecessary but highly amusing backstory reminiscent of the preamble to the Dead Milkmen’s “Bitchin’ Camaro.” Another number argued against their existence as a mere photo opportunity, and they described another song as being about having really bad shits all night in a Motel 6. Charming blokes, but a tad too honest, in my book.

Following Slaves, from a distance I heard Tyler Childers, who took the afternoon in a honky-tonk direction I did not see coming. As a country artist, Childers did a serviceable job, but again, not necessarily innovative. Anyway, not my bag, but he provided the afternoon with a soundtrack to the growing cloud obscurity that would come and go throughout the rest of the day to provide relief from the August heat. Day One wasn’t that bad, given the forecast for Saturday and Sunday is in the nineties.

Stars hail from Canada, and have been around for what seems like forever. I’d only seen them once before, at the Vic, I think, but their set reminded me of what I love about them so much. The sextet is unabashedly and unapologetically indie pop, with male and female vocal parts that sometimes trade leads and other times harmonize. The male lead at one point asked if everyone had a wonderful Pride Month, which seemed like an odd thing to ask, given that happens in June and it was August 2, but many in the crowd answered in the affirmative. My Pride Month was pretty much like every other month for me, but there’s nothing wrong with being proud about being who you are, unless you’re opening for The Fall. Stars played a number of songs from their most recent outing, “There Is No Love In Fluorescent Light,” which must give lighting manufacturers a nasty knock, but the record is really lovely, much like the rest of Stars’ extensive discography. Some earlier numbers were also highlights, especially “Take Me To The Riot.” On a couple of numbers the male lead busted out that keyboard thing you blow through—I think it’s called a harmonium or a melodica or something. Those were cool moments, but their whole set just illustrated what an innate gift for melody and song construction the members of Stars have. Again, not reinventing sliced bread, but when it’s so delicious, why bother?

All I can tell you about London On Da Track is they asked “Chicago” to “make some muthafuckin’ noise” at one point from the Perry’s stage during Stars set, and the crowd complied. I’m always confused as to what sort of noise to make, usually yelling an “AAAAAAAAAAAAAH” of some kind. As Monkee Davy Jones said during his screen test, “I make a terrible sound.”

Liverpool’s Wombats were up next, and drew an impressive contingent of fans to the Lake Shore stage in the midst of the midafternoon sun. They drew such a large number of fans, I thought they could have been later in the day, or maybe even headlined Pitchfork—well, at least maybe the Blue Stage. Here’s another group that’s been around for what seems like forever, that isn’t necessarily reinventing rock but makes great (and funny) rock songs. While I haven’t spent much time with their most recent record, everything they’ve put out has been solid, and they are always fun to hear. The last time I saw them was at The Empty Bottle, and as they said when introducing their most recognizable song, “Let’s Dance to Joy Division,” it’s hard to believe that one came out twelve years ago, when they were nineteen. At one point toward the end of the set, they were joined onstage by actual wombats! Okay, they were people in giant wombat costumes, but it was still neat. Real wombats, which are a kind of badger-like creature native to Australia, would have been very alarmed by their performance, and judging by how protective the government Down Under is of their native species, it was probably better to have people in wombat costumes than the real thing. Also, real wombats are much smaller than people, so they wouldn’t have shown up very well on stage. The only real wildlife I spotted were seagulls, ants, spiders, lightning bugs and a few butterflies, including a couple of monarchs. Dragonflies were chasing each other, and at times cicada trills threatened to drown out the music from beneath the trees.

This was the first time I had seen Scotland’s Franz Ferdinand live, and these elegant, foxy bachelors sashayed, rocked and stormed through their most recent singles including “Always Ascending” and “Do You Wanna?” as well as some of their earlier material. Their breakthrough single, “Take Me Out” drew a stream of casual observers running into the crowd to get close and sing along to that one. Although most of their set was characteristically mid-tempo, they attacked their compositions with such a punk-rock ferocity that it was truly a revelation. I started the set thinking they were The Knack with a bit of The Clash added in and ended with thinking they must have Gang of Four as a large inspiration. Franz Ferdinand, as their retro handle implies, aren’t really creating anything new either.

What I heard of LANY, and what I know about them, that they include members of WRLDS, also suffering from vowel deficiency syndrome, did not inspire much confidence or interest. They are supposed to be a rock band but (and this was from a distance, mind you), they sounded like so much syrupy synth pop without any edge. They apparently ended their set early due to technical difficulties and promised to be back soon to make it up to the faithful. No really, gentlemen, that’s not necessary, thank you.

Synth pop with an edge could be found in the music of Chvrches, who suffer from incorrect vowel replacement syndrome, but are none the worse for it, at least musically. The Scottish ensemble foregoes electric guitars in favor of keyboards and synths, but they come packing glorious melodies. Much has been made of their lady leader getting called out by an internet flamer, but she was more eager to throw a spotlight on their diminutive size, which might explain why she was wearing boots the height of which came close to making her a member of KISS. “Love Is Dead,” her necklace read, accented by a string of pearls. But Chvrches have much more in common with a band like Berlin or Missing Persons, led by New Wave chanteuses with distinctive voices. She was joined at one point by the dude from The National, who lent his baritone gravitas to one of the songs on their latest record.

Even though the sign behind them simply said “MONKEYS,” the crowd knew to expect the Arctic species, and I would swear that when they took the stage in their black-and-white clothes and with their black-and-white filming, there was even a glacial chill that permeated the air for a moment. Arctic Monkeys provided what amounted to less of a glacial pace and more of an avalanche of cool. Sure, they played a few from their most recent, somewhat, um, challenging record, “Tranquility Base Hotel and Casino,” but they also drew heavily from what I believe is their finest moment so far, “AM,” which was my favorite record for the year it was released. I’ve never been a fan of “Why’d You Always Call Me When You’re High?,” believing there were far better songs on the record that should have been singled out for airplay, but tonight it was one of those numbers that just collected cool-like beads of sweat on an ice cold mug of a frosty libation.

What was the highlight of the day? Yes, it’s true that “Wal-Mart on the Lake” as my fellow critic Jim DeRogatis derisively calls it, leads a lot to be desired, but even more than the bands I saw today, you know who was bringing all that? Sign-language interpreters! At every set (excepting Slaves) they were there signing their fingers off and they knew all the words and really got into it! I’m not hearing-impaired, although that may happen if I keep going to loud rock shows, but I loved watching the women sign along to the bands, and they even did air guitar and air drum type things when there were no words to be heard or signed. Maybe it’s a sign of the times that there need to be interpeters, and whether there were any deaf to witness it, I don’t know, but Chicago, and the world in general is a better place because they were here.