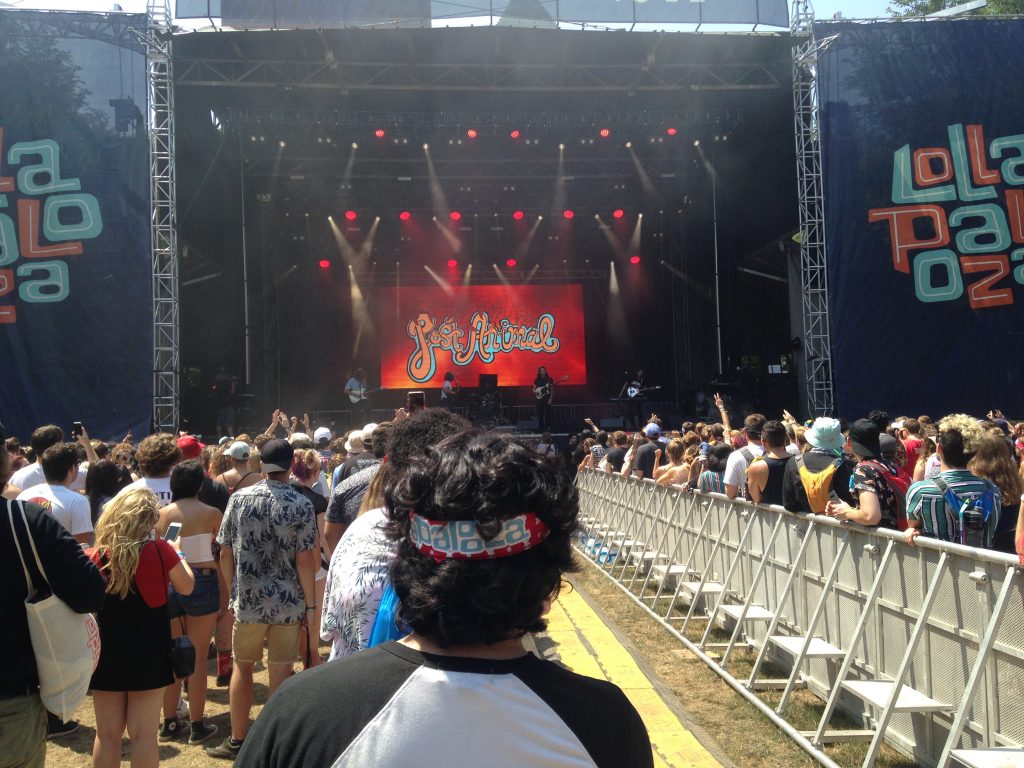 The second day of Lollapalooza was bookended, roughly, by Post Animal and Malone, two acts with names that capture the festival’s wobbly, end-of-history feeling. Lolla is post- a lot of things, and Friday was a day of being here, now, in the moment, enjoying anything and everything that’s ever come before.

Shortly after the gates opened, British punk band Dream Wife’s cries of “I am not my body!” reverberated around the southern half of the park. The line is from their single “Somebody,” a song about sexual abuse backstage at a concert. It’s a necessary refrain for any concert and especially for a major musical festival. In 2018, Lolla can make space for criticism of toxic show culture, as long as it’s early in the day.

The four-piece filled the space with a club-show energy that suited their sparse audience. They draw equally from nineties rock and pop, part Riot Grrrl and part Spice Girls, a comparison they invite. At one point, lead singer Rakel Mjöll riffed on the lyrics of “Wannabe”: “I’ll tell you what I want / What I really really want / I want to fuck you up,” she sang.

On the other side of the park, Chicago prog rock band Post Animal played to a much larger crowd, easily one of the bigger audiences you could find for a rock act with an early slot. The band—which cut its teeth on the Chicago bar circuit before sometime guitarist Joe Keery’s breakout turn as the smarmy boyfriend on “Stranger Things”—sounded downright enormous on the festival sound system. They brought the riffs, and the crowd brought the energy. For forty-five minutes, the first ten rows were ignited, bouncing up and down and throwing cans into the air.

Post Animal is dead-set on sounding exactly like a band from the seventies, and their songs are often exercises in gear-head techno-mastery that might not always connect with listeners outside of other riff connoisseurs. But the band made perfect sense here. After all, it’s a festival of technical and precise music, and Post Animal is exactly the tight and reliable outfit to fill the day’s quota of capital-R rock.

Post Animal picked up the slack for New York post-punks Parquet Courts, who pulled off an admirable set that felt nevertheless out of place. An amplifier malfunction in the second song earned them some goodwill. When one of the guitar amps cut out, the band didn’t skip a beat. It jammed on while front man A. Savage and a guitar tech ran backstage and replaced it on the fly, belying a career built on a seat-of-the-pants DIY approach. When they returned with a working amp, the crowd cheered.

But the band’s no-frills style, as well as their obvious skepticism of Lollapalooza, meant they would never quite fill the shoes of the main stage they’d been scheduled to play. As banter, Savage offered a quip: “I don’t care what they say. You’re Lollapa-winners to me!”

In lieu of hooks, the band shouts socialist mantras, like “Better protected whenever collected!” The lyrics are oblique enough not to get in the way of the grooves, and in the context of Lolla, the messages of collectivity and unity feel less like communist proselytizing than a way to pump up a crowd that’s come for a shared festival experience.

But shared experience is only one side of the Lolla coin. The other is that persistent question: What does all this mean to you?

That question was best asked by Lizzo, the body-positivity rapper from Minnesota who took the stage in the mid-afternoon. Lizzo drew a massive crowd, not as large as Malone, of course, who had the advantage of playing in the early evening, prime time. Malone has a magnetism that’s all his own. His whitewashing of trap music invites the audience to consume culture guilt free.

Lizzo, on the other hand, invites you to share in her ethos of self-empowerment, which she models in her music and her performance. She understands what’s important about the festival experience for so many people: you want to see artists that help you feel present, powerful, contemporary.

The song that got the most cheers was “Scuse Me,” which has Lizzo singing, “I don’t see nobody else / Excuse me while I feel myself.” When she finished that song, she introduced herself and talked a bit about her philosophy of body positivity. “Haters might say you’re being self-centered,” she told the crowd. “But if somebody comes to you with that bullshit, you tell them, ‘If I’m not full of myself, who the hell am I supposed to be full of?’”

“When you get home, I want you to look in the mirror and tell yourself, I’m beautiful and I can do anything,” she said. “Promise me you’ll do that Chicago?”