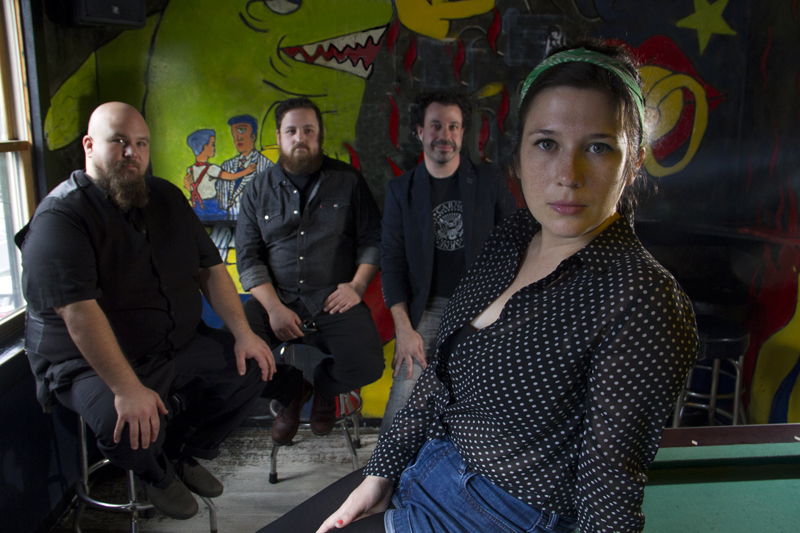 In an era of entertainment narrowcasting, it seems that every conceivable musical genre pairing has been attempted; many pursued to their logical ends. It’s comparatively rare to discover an artist creating something that feels fresh and new out of existing musical forms. Chicago band The Claudettes are just such artists.

When The Claudettes released their debut CD, 2013’s “Infernal Piano Plot…HATCHED!,” the group was just pianist Johnny Iguana and drummer Michael Caskey. The duo had a regular gig at a bar in Oglesby, Illinois and Iguana and Caskey named their act after that bar, keeping it even after the place closed. (The bar’s namesake Claudette stayed on as the group’s manager, a role she continues.)

The Claudettes’ sound is hard to pin down. There’s a strong foundation of barrelhouse and stride piano jazz, but there’s plenty of boogie-woogie as well. Even on that first album, the duo delivered its original music with a punk attitude.

By the time of 2015’s “No Hotel,” The Claudettes had expanded to include a vocal chanteuse named Yana. Not dialing back on the instrumental intensity a bit, “No Hotel” serves as an excellent showcase and Yana’s soulful vocal prowess shines on her mini-set. The album features a mix of original tunes and winning readings—reinventions, really—of left-field classics (“California, Here I Come,” Irving Berlin’s “There’s No Business Like Show Business,” a pair of Serge Gainsbourg tunes and more). There’s cocktail jazz, but it’s delivered in a uniquely aggressive, up-tempo manner.

The Claudettes’ released third and best album, “Dance Scandal at the Gymnasium!” this year. The disk debuts a radically revised group: Berit Ulseth is the new vocalist, and Zach Verdoorn has come aboard, playing guitars and bass. But what might look like sops to convention reveal themselves to be carefully executed moves that further The Claudettes’ unique musical vision. The jazz foundation remains, as does the in-your-face delivery, but it’s expressed in a fuller style thanks to Verdoorn’s bottom-end (courtesy of a Fender VI). And Iguana even slips in a subtle bit of Mellotron on “Give it All Up for Good.”

Ulseth more than holds her own in front of this powerhouse trio, and the previous album’s focus on covers is replaced by an all-original set of songs by Iguana, who remains at the center of the musical maelstrom. Despite its modern-themed title, the rocking “Naked On the Internet” recalls the call-and-response antics of Louis Prima and Keely Smith. Some call it punk jazz; others label it psychobilly R&B. In the end, labels don’t matter, nor do they get at the heart of the music from this innovative and constantly evolving outfit.