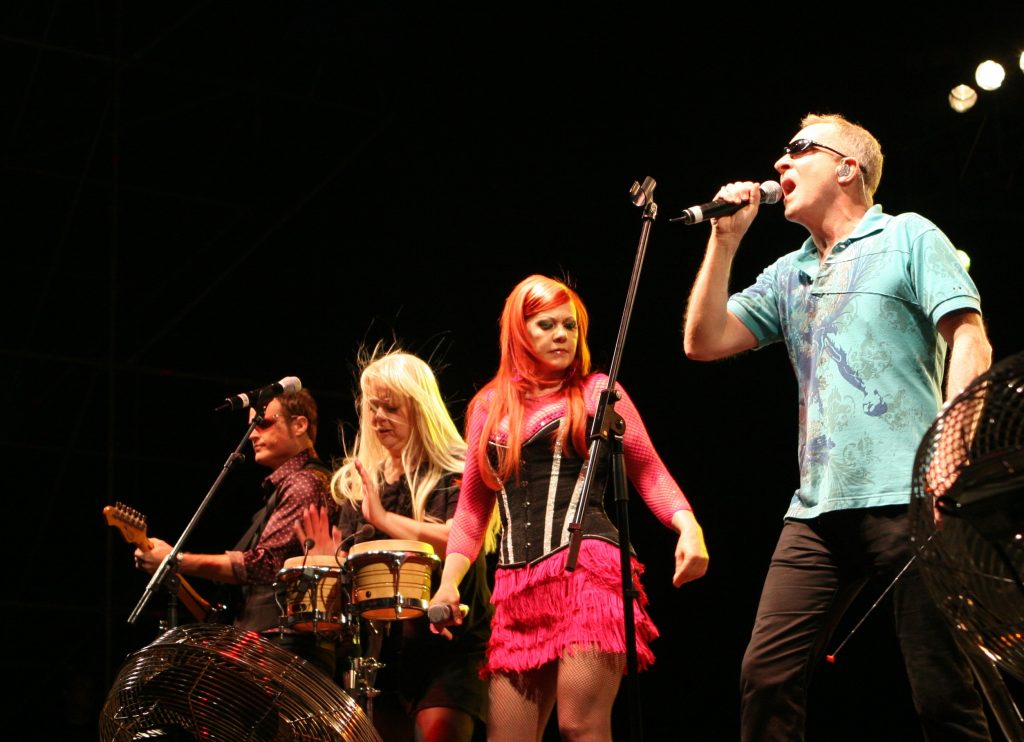 Emerging out of the DIY indie scene of Athens, Georgia (home of the University of Georgia, then very much a party school), the B-52s took a different musical direction than fellow travelers R.E.M. and Pylon. While all three groups shared—albeit to different degrees—a simple, straightforward and stripped-down approach to music, the B-52s concentrated on party music.

And what a party it was! With an over-the-top visual aesthetic (beehive hairdos and jet-age sartorial choices) wedded to a peppy sound, the group hit it big with “Rock Lobster,” a silly song about, well, a lobster. The group earned fans in high places: in one of his last interviews, John Lennon expressed admiration for the band’s self-titled 1979 debut album, noting more than a passing similarity between Kate Pierson’s shrieking vocals and those found on the Apple Records-era releases by Lennon’s wife, Yoko Ono.

1981’s “Wild Planet” built on the success of the debut album, and the B-52s became a sensation on record, live in concert and on television. The campy antics of vocalist Fred Schneider only added to the goofy, fun atmosphere of tracks like “Strobe Light” and the darker, minor-key “Private Idaho.”

But at least for a time, the ship ran out of fuel. Perhaps it was a case of too much too soon, but a pair of EPs released in the early eighties felt like weak retreads, milking the formula (“Party Mix”) and straying from the sound that brought the band its fame (“Mesopotamia”).

1993’s full-length “Whammy!” fared better, but sales paled in comparison to the band’s first two albums. And none of its three singles garnered much chart action outside the club dance charts.

“Bouncing Off the Satellites” slipped by largely unnoticed on its 1986 release. Reeling from the loss of founding guitarist Ricky Wilson (he died of AIDS the previous October), the band did not tour in support of the album and Warner/Island didn’t promote the release. The group went to ground for a while.

Resurfacing in 1989, the B-52s roared back with “Cosmic Thing,” a return to form that featured the hit “Love Shack.” Production by Nile Rodgers and Don Was gave an up-to-date sheen to the group’s kinetic tracks; the album was both a commercial and critical success. But 1992’s “Good Stuff” sounded like leftovers from the “Cosmic Thing” sessions, and found the group reduced to a trio with the (temporary, as it turned out) departure of vocalist Cindy Wilson. An inevitable greatest-hits collection followed.

Wilson eventually returned, and on the strength of the band’s live act the B-52s re-entered the studio, in 2008 releasing the well-regarded “Funplex.” 2011’s “With the Wild Crowd” captured the fun and excitement of a B-52s live show in front of a hometown audience. In 2015, those who had not seen the original lineup in concert got a belated reward with the belated release of “Live! 8-24-1979.” These days, the group functions more as a legacy and nostalgia act than a creative going concern, but with songs as fun as “Rock Lobster” in its set, there’s nothing in the world wrong with that.