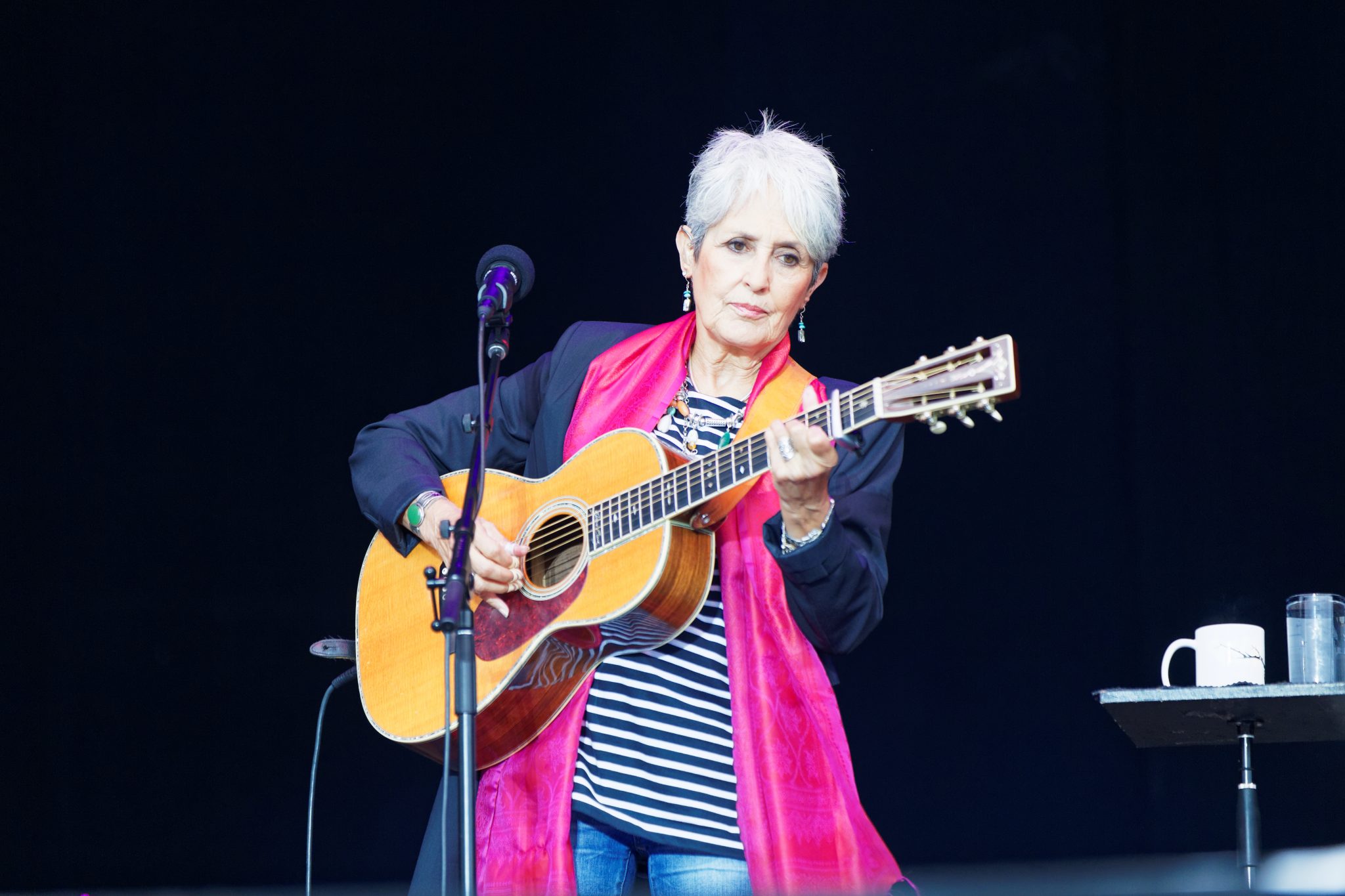 For nearly sixty years, Joan Baez has held fast to folk music’s original directive of giving voice to the disenfranchised. Where her rivals for the sixties folk-madonna title (Judy Collins, Joni Mitchell) became iconic as slight young women behind massive guitars, alone on darkened stages, Baez, in the popular imagination, is never alone. She’s always a radiant presence in a throng of people—on the steps of the Capitol in 1963, at Woodstock in 1969. America has never had a popular-music-maker more tirelessly, profoundly activist, with the possible exception of Woody Guthrie, whose career was not as lengthy. Over the decades, Baez has enjoyed a handful of chart-toppers (“Diamonds & Rust,” “The Night They Drove Old Dixie Down”), but her life’s work hasn’t been as a hit maker; it’s been as a social conscience. Her liquid, octaves-spanning soprano—one of the most instantly recognizable voices in American pop music—could have been used to sell anything, from 45 rpm singles to sports cars. What she’s sold instead is a dream of social justice.

This fall she arrives in Chicago on her farewell tour. She’s seventy-seven, and has been in the public eye since 1959, so it’s hard to begrudge her an exit from the stage; but on hearing the news, your first thought might be, “Why now? Why, when the world she’s worked so hard to bring into being is farther than ever from reality?”

But that may be the whole point: in undertaking a final tour, Baez has made perhaps the only imaginable move that could draw our unified attention. Voices that have been speaking for fifty-odd years are too often drowned out by the newer ones. We’re an icon-rich society; we take those of long-standing for granted.

Until we lose them, that is. A politically and artistically active Baez has been easy to overlook because we know her so well; her voice is part of our cultural DNA. But her retirement has suddenly made that voice a finite resource, giving her latest and presumably final album, “Whistle Down the Wind,” a downright valedictory aspect.

That seems to have been by design, as the songs—which presumably form the bulk of her farewell concerts—appear to have been composed especially for her, reflecting her legend and longevity. In “Another World” (written by Anonhi), there’s a previously unheard weariness in her singing; she almost mutters the lyric, “I need another world / This one’s nearly gone / Still have too many dreams / Never seen the light.” It’s the lament of an old warrior having to lay down her sword before the battle is won. In “Last Leaf” (by Tom Waits and Kathleen Brennan) she’s more defiant, singing, “I’m the last leaf on the tree / The autumn took the rest / But they won’t take me … There’s nothing in the world / That I ain’t seen / I greet all the new ones that are coming in green.” And in “The Great Correction” (by Eliza Gilkyson) she proclaims, “It’s the bitter end we’ve come down to / The eye of the needle that we gotta get through / But the end could be the start of something new / When the great correction comes.”

The album’s most moving cut is Zoe Mulford’s “The President Sang Amazing Grace,” an almost-journalistic account of the 2015 Charleston church shooting and its aftermath, set to a simple piano arrangement. It’s the only cut on which Baez does not play guitar. “No words could say what must be said / For all the living and the dead,” she sings about Barack Obama’s address at the memorial for the victims, “So on that day and in that place / The President sang ‘Amazing Grace.’” For the final repetition, she alters the lyric: “My President sang ‘Amazing Grace.’” And if that doesn’t get you where you live, you’re no friend of mine.

The tawny-tressed young firebrand is now a snowy-haired matron; her voice, while retaining its purity, has deepened and darkened, from sparkling silver to burnished gold, and there’s just a hint of gravel in its lower register. But in all other respects, Joan Baez has been an astonishingly consistent presence in American life for as long as many of us can remember; her music has been a bulwark against corruption and violence, and a beacon of hope and encouragement. This is your last chance to see her, and to honor her for it. I’d take it, if I were you.