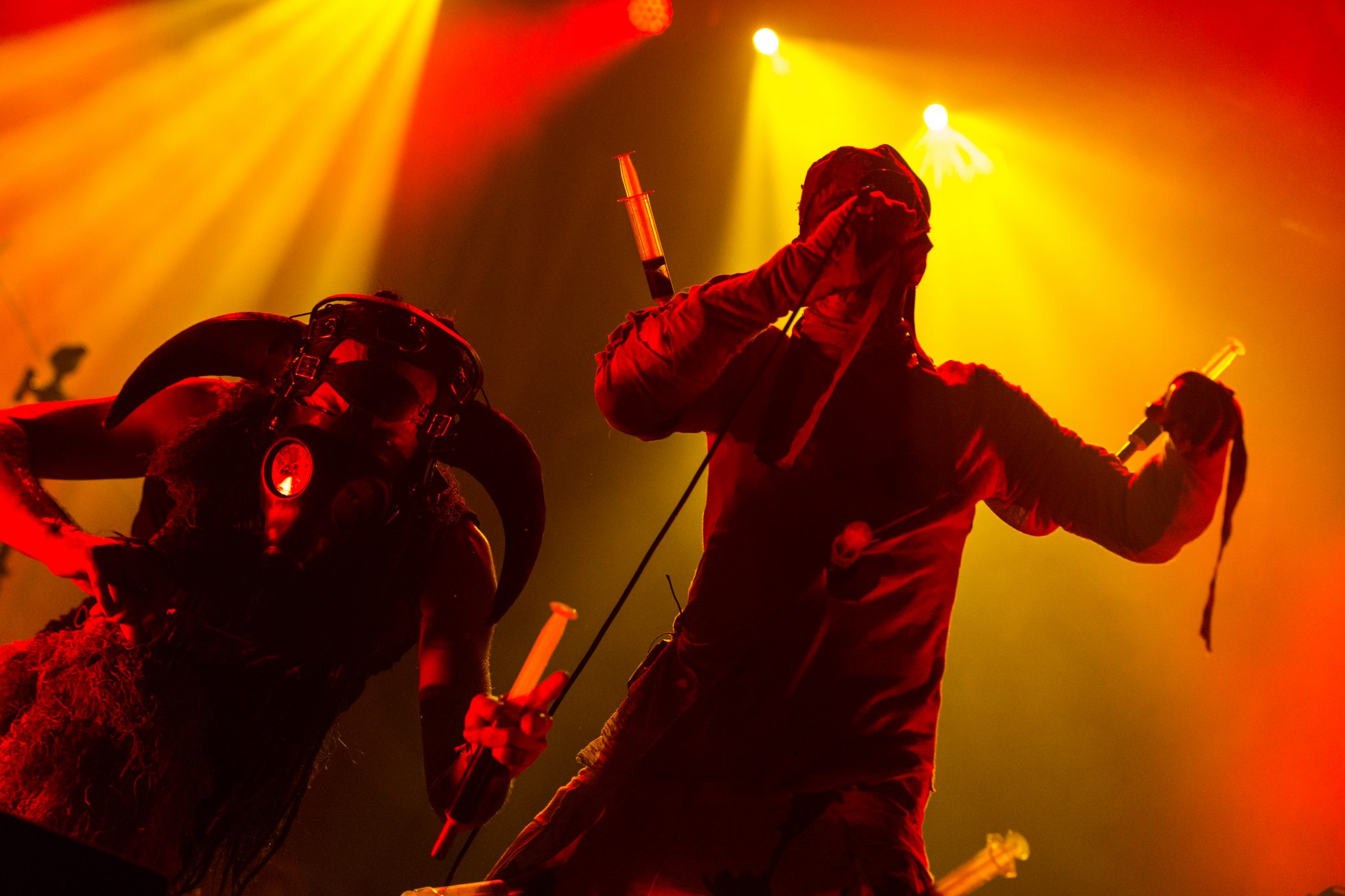 I’m listening to industrial music so you don’t have to, to get ready for the seventh iteration of Cold Waves. The festival is this month at Metro (3730 North Clark), with a launch party at The Empty Bottle (1035 North Western) kicking things off before three nights of mayhem. While I’m no authority on the genre—there are minds more immersed in the milieu than I, and likely many in Chicago—it’s a sound I enjoy on an occasional basis and it deserves consideration.

For the uninitiated, industrial music sounds like music made in factories by machines. The genre adopts mechanical rhythms originally inspired by the automation of the Industrial Revolution. And it may be these inorganic inspirations that prompt those that use the form to communicate their bleak worldview. Industrial musicians may be shiny happy people (unlikely, though possible), but their music and lyrics definitely aren’t. It’s more like Shiny Black Bloody Steel Knives Stabbing Confessions Leading Into Gold Pretty Hate Machines.

The best known examples of the influence of industrial music can be found in what today could be considered “legacy alternative rock” acts like Depeche Mode, Ministry and Nine Inch Nails, although hardcore fans would and should take umbrage at such an attempt to lump these “pop” acts into the genre.

Yet if you disregard their electropop speak-and-spell or slowed-down “hits” and listen to the rhythms backing the early Depeche Mode single “People Are People,” you can hear that factory-inspired percussion… and the video, partially set on a submarine, reinforces the theme.

Also consider the “I Wear Black On The Outside Because Black Is How I Feel On The Inside” philosophy espoused on Ministry’s “Every Day Is Halloween,” and the aggro-innovation of “Stigmata” from their classic “The Land Of Rape And Honey.” Al Jourgensen of Ministry once called Chicago home, but has long since decamped to Austin, Texas followed by Los Angeles. Ministry’s latest is “AmeriKKKant,” featuring a single that sings the praises of “Antifa” and artwork with the Statue of Liberty raising a middle finger, just in case you’d forgotten Al’s perspective on the New World Order.

When Nine Inch Nails’ single “Down In It” debuted, my roommate would play the thirty-three-and-a-third twelve-inch at 45 rpm on our college radio station just to get a satisfactory beats-per-minute count. Trent Reznor may have done more than anyone to popularize industrial music, but he would be the first to admit that what he’s really done is to create pop music using industrial tropes. Naturally gifted with a bleak worldview, and able to convey that with lyrics so dark they almost can’t bring themselves to be sung (example: “head like a hole / black as your soul / I’d rather die / than give you control), Reznor also has a gift for earworm melodies and compelling intervals. Just listen to the notes that bring “Hurt” to a close, to cite but one of many moments from his discography.

Trent’s not the first industrial artist; he’s just the biggest. When people ask me about what I think of Nine Inch Nails being in the Rock and Roll Hall of Fame, I say that’s cool. I get it. He’s the most famous, but what about Skinny Puppy? What happened to the guys who actually created it? They literally were the first guys to take synthesizers and go really hard to make them sound scary and mean. I think that was an insane idea and it was completely original.

Indeed, Patrick says that he and Reznor were listening to Skinny Puppy and Ministry during those early years of Nine Inch Nails, and it’s not hard to hear their influence.

Skinny Puppy was conceived in 1982 as a side project by Vancouver musician Kevin Crompton, who was bored with the pop direction of Images In Vogue, the new wave band he was in. Kevin Ogilvie joined as a vocalist and became Nivek Ogre, and Crompton rechristened himself cEvin Key (similar to the predicament of Band Of Susans or Mostly Dave, perhaps they were concerned about being Too Heavy In Kevins). After self-releasing a cassette, Skinny Puppy became an early member of the Nettwerk label stable, whose artists would later include the musical kin Manufacture, Single Gun Theory and Consolidated, as well as bigger hitmakers like Coldplay, Sarah McLachlan, Dido and Barenaked Ladies. Bill Leeb renamed himself Wilhelm Schroeder and played with the group from 1985 to 1986, and when he left to form Frontline Assembly, Dwayne Goettell joined Skinny Puppy and continued as a full-fledged member (as well as collaborating with Key in Doubting Thomas, Cyberaktif, The Tear Garden and Hilt) until his death from a heroin overdose in 1995, two months after Ogre had officially quit the band. Drug addiction, fires, floods and an earthquake combined to derail a three-record deal with Rick Rubin’s American Recordings and made what was thought to become Skinny Puppy’s final album, aptly named “The Process,” a long and involved one.

What Ogre recorded as a side project, called W.E.L.T., with Mark Walk of the band Ruby, would eventually be released as “Welt” by the duo renamed ohGr. Skinny Puppy with Key and Ogre would reform off and on beginning in 2000 (and include Walk since 2003), and their most recent record was released in 2013.

Aside from Skinny Puppy’s nightmarish sound, the group’s lyrics address all the hallmarks of non-hit-making topics, such as animal rights and vivisection, AIDS, environmental degradation, war, the right to privacy and drug addiction, and many of these themes are graphically featured in their music videos and live concerts, which frequently include Ogre being coated in fake blood by the end of the night. One infamous scene featured Ogre’s simulated decapitation at the hands of then President George W. Bush and Vice President Dick Cheney (who were also simulated, it should be noted).

ohGr is part of Cold Waves this year, and although I’m less familiar with their discography, judging by their latest, the terrifying “Tricks,” one should anticipate some similar tricks from Ogre and Walk. They’re not Skinny Puppy, but they’re closer to the real thing than Nine Inch Nails.

Cold Waves VII has expanded this year to include New York and Los Angeles, but the hometown version begins September 21 at The Empty Bottle with Lesley Rankine (of Pigface, Silverfish and most recently, Ruby fame) and punk trio Crash Course In Science, who formed in 1979 and released “Situational Awareness” last year.  The rest of the weekend’s black celebration will be at Metro (and Smart Bar), with September 21 featuring ohGr, Chemlab (performing debut “Burnout at the Hydrogen Bar”), Paul Barker and Chris Connelly projects Lead Into Gold and Cocksure, Hide (following their intriguing and troubling Dais release “Castration Anxiety”) and Omniflux. September 22’s line-up includes Meat Beat Manifesto, C-Tec (Jean-Luc DeMeyer of Front 242 and Marc Heal of Cubanate performing live together for the first time in twenty years), Hellbent, Author & Punisher, Wire Spine and New York’s Anatomy. The long, dark and beat-heavy weekend will conclude on September 23 with Frontline Assembly (Bill Leeb’s band since 1986), Die Krupps, The Black Queen, Vancouver’s Actors, Continues (the latest project from Babyland’s Dan Gatto) and local up-and-comers Ganser.

Legendary Chicago label Wax Trax! will have a pop-up shop at Metro, and there will also be booths for Electronic Saviors and Music to Cure Cancer, food trucks, raffles and silent auctions.

Cold Waves began in 2012 as a memorial concert for fallen Chicago musician and sound man Jamie Duffy and a portion of the proceeds will benefit Darkest Before Dawn, an organization that offers counseling, support, community and resources to the late-night service-industry staff and live-music engineers who keep clubs and bars humming.