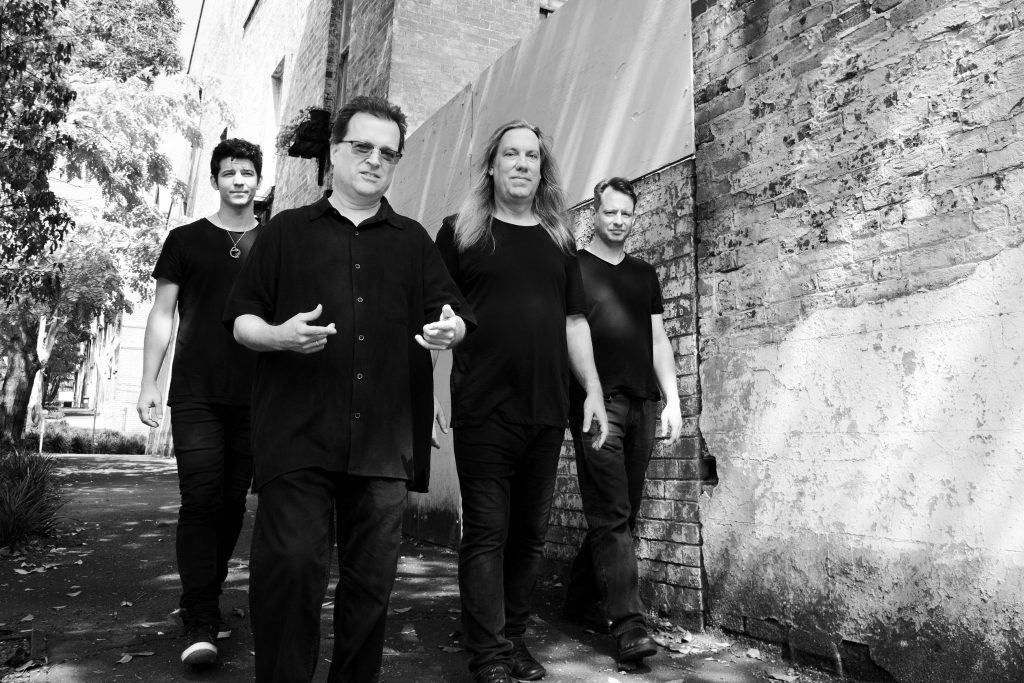 Violent Femmes’ first album turned thirty-five this spring. It’s long since gone platinum, and outlets like Rolling Stone commonly tally it among the all-time great debuts. If you’d told me back in 1983—as I was picking the LP out of a bin at my local record store—that the band with the demented moniker was destined for such accolades, you’d have broken my heart a little. Like so many lovers of the nascent indie movement, I lived for the thrill of browsing record stores for hours, encountering music through the listening-station headphones, flipping through bins of vinyl in search of unheard-of bands making songs meant to live on the margins. No band stood for the liminal more than Violent Femmes.

Violent Femmes were the coming-of-age of alt music before it had a name. There was just enough taboo in their style and lyrics, and in Gordon Gano’s godforsaken voice, to guarantee you were listening to rock ’n’ roll as it was always meant to be: offensive to someone. Mainstream radio wouldn’t touch them. That went without saying. The Femmes resided at the lower end of the FM dial, on college stations with a ten-mile broadcasting signal. The band’s name alone scared off middle-of-the-dial folks, and that first album cover—with the barefooted little girl in the white dress, half waif, half phantom, peering into a ramshackle building—was as creepy as the premise of the band. Was the little girl supposed to be a Violent Femme? What was a Violent Femme, anyway?

“When I was growing up on the west side of Milwaukee,” bassist Brian Ritchie would explain in early interviews on local radio and TV, “we called a sissy or a wimp—well, that’s what we called a femme.” Violent + Femme: basically, it’s a contradiction, Ritchie explained. The name evokes bad-gendered macho bullshit. But the three guys on stage playing that punked-up, old-time rock ’n’ roll put the target on their own backs. They were suddenly the Femmes, channeling violence, manifesting it as music, culture in contradiction with itself. The Femmes were speaking the turmoil of the eternal picked-on teen in all of us, fighting off the shame of adolescence.

I bought that first Femmes record as though it was my own secret finding. My eye might have been caught by the album art, I might have heard one of the songs play from the turntable behind the counter, I might have asked the guy working the counter whether he’d heard anything new I should listen to. Just as likely, I bought the record because the name was so stupidly cool. The second Femmes LP, “Hallowed Ground,” appeared less than a year later, every bit as daring—if anything, stranger still, leaning darker into country blues and a style of forbidden grotesque. I played those two records nonstop. No band I ever played on my Sansui stereo drew the ire of lovers of The Doors, The Who and CCR the way the Femmes could. “I stood right up in the heart of hell,” Gano wailed from my speakers, “I never tell”—and out would come the twentysomethings pounding on my dorm-room door like a bunch of suburban parents, shouting, “Turn that shit down.”

It’s hard these days to convey the simple offense the Violent Femmes were to 1980s musical culture. Now that they’re heralded as a classic band, assimilated by long-tradition listeners into roots music, you could almost be forgiven for miscalculating the degree of radicalism that was in their stripped-down, punked-out sound. Gordon Gano’s voice came at you like the bleating of some testosterone-deprived adolescent, as shrill as a cold shower, some sort of country-western yodel on speed, his overly sharpened plaints giving way nevertheless to resolute, even pristine, notes. The lyrics, sometimes bubblegum simple, sometimes demented, always desperate, were in a cantankerous tumble of guitar and stand-up bass and snare drum, the whole thing so elemental you had the feeling you were listening to rock ’n’ roll before anyone knew what it was—perhaps the evil twin of rock ’n’ roll—as though Elvis had some punk cousins he wouldn’t let into his band.

At its best the sound of the Femmes has always clung to the spirit of the impromptu. Call it folk punk, call it skiffle music, call it discomfited, soulful blues turned raucous and unreliable. The opening of that 1983 debut is a boy longing to approach a girl who’s out of his league, but he loses his nerve. Immediately Gano retreats into daydreams and teen-aged highs and summer sunlight—yes, “Blistering In the Sun”—and we’re guided by a tight little hook that beats, almost childishly, in the exact same rhythm and notes as the lyrics. Halfway through, the song bottoms out into a bedroom secret, the vocals more breath than music—“Body and beats, I stain my sheets, I don’t even know why”—and we’re so far inside the shame and longing and mixed-messaged confusion of teen-aged (or, maybe just American) sexuality that our only options are sympathy or running away.

The second track, “Kiss Off,” establishes the record to come. In seductive talk-singing reminiscent of Lou Reed—a major influence on, and later a fan of, the band—Gano adopts the persona of the picked-on loser telling everyone who’s rejected him past and future to kiss off, waxing philosophical about it because they do it (that is, reject him) all the time, yeah, yeah. At the center of the song there’s a mini-revolution: an improv jam breaks out, each band member playing whatever line he feels like playing, Ritchie knocking out a lead bass part, Gano a lead guitar, with seemingly little regard for what the other is doing. It’s gorgeous cacophony, jazzy, reminiscent of the Velvets if they had hailed from a town ninety miles south of Nashville. The Femmes would develop the technique in a format they called the “horns of dilemma,” regularly inviting local musicians to jam with them in concert, in the middle of songs, unrehearsed. At any given show, characters unknown to the audience have joined the band for the night. In true punk style, the fourth wall of performance gets torn down. What is performance, after all, if not a delighted amateur rushing the stage? Whether she gets there or not is but a distinction of degree.

There’s not a faltering step on “Violent Femmes;” it is truly one of the great rock debuts, higher even than Rolling Stone rates it. The Femmes can pull off countrified reggae with slightly bubblegum lyrics (“Tell you, mon, I’m stuck on this lovely girl”), just as readily as they can issue desperate, anthemic odes to frustrated sexuality. In “Add It Up,” Gano is teenaged lust personified, as he torments himself about not being able to get one kiss, one screw, one fuck, but the confusion in his sexuality isn’t just about unreciprocated desire. There’s an uncertainty in his idea of himself—“something won’t let me make love to you”—that gives existential urgency to the plain sexual yearning, much in the way the lament in “Kiss Off” slides from “’cause you left me” to “I lost God” to, of yeah, “Everything, everything, everything.” Stake enough on any given desire and everything becomes ultimate. The closest thing to a radio hit on that debut, complete its own kitschy MTV video, was “Gone Daddy Gone,” which, imagine this, was a punk song featuring not only the laddering optimism of a xylophone but a full-fledged xylophone solo.

When the trio of Gano, Ritchie and drummer Victor DeLorenzo were starting out, they busked on sidewalks outside the same Milwaukee theaters and concert halls that wouldn’t book them. One such session in front of the Oriental Theatre caught the attention of James Honeyman-Scott and Chrissie Hynde of The Pretenders, earning the Femmes an invitation to open that night for punk’s newest limelight band. Contrary to legend, fame didn’t follow immediately. “It’s a true story,” Gano said in a 2015 Spin interview, “but it wasn’t a break.” It didn’t lead to gigs, or to a record deal. For much of the set that night the hometown Femmes were actually booed. One of the reasons, I suspect, that fans remain so fond of that piece of lore, often positioned as a discovery story, is the image it preserves of three young punks playing traditional instruments in some slightly deranged form of rock and street folk for audiences who—if they bother to stop at all—might not have a clue as to what they think about the music they’re hearing.

It’s all in the service of the idea of a band so out there, so indifferent to what the mainstream is saying about them, that rock history might have missed them entirely. The Femmes were unglamorous, decidedly off-kilter, even ugly in self-presentation— frontman Gano’s effete demeanor and choirboy face and squeaky pubescent voice adding to the effect. “Violent Femmes” went platinum slowly, over a great many years, as if by word of mouth, without actually making the Billboard charts except for a very brief period eight years after the album’s release.

In the wake of their early college radio success, the Femmes would often begin a show in procession down the center aisle of a theater like some high school Mardi Gras band. (I can still remember the wonderful pomp and silliness of it.) The point seemed to be, in true punk spirit, that they were fans first, emerging from nowhere, likely to return whence they came, as if there were no difference between stage and stands.