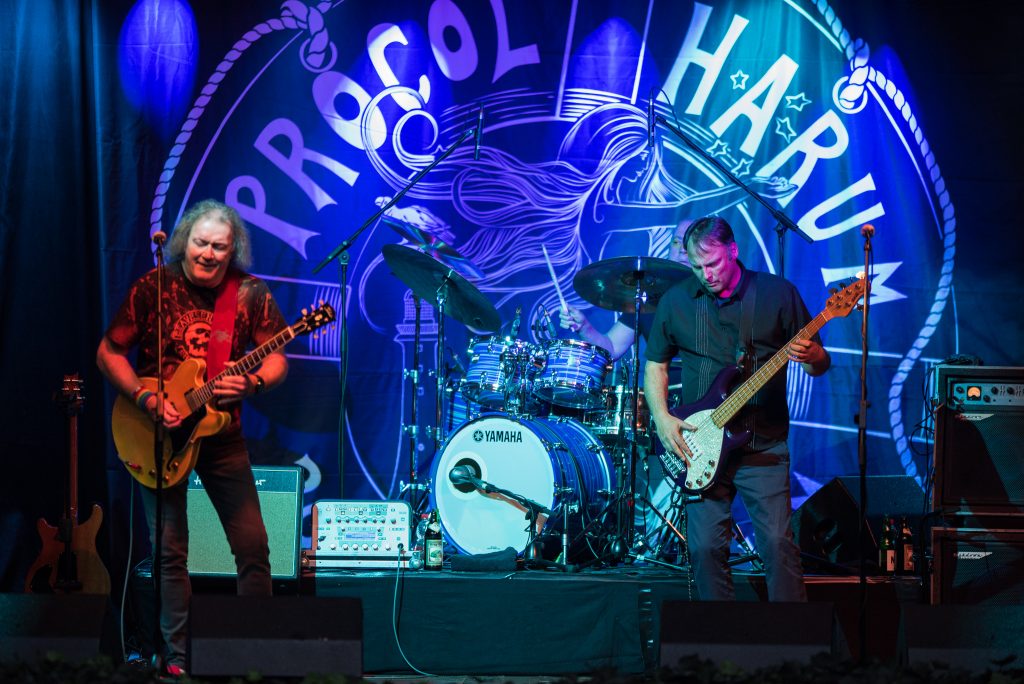 Procol Harum emerged from the creatively fertile musical ground of late 1960s London. After singer and keyboardist Gary Brooker left vocal group the Paramounts, he began a fruitful collaboration with poetically inclined lyricist Keith Reid. The pair came up with a classic in “A Whiter Shade of Pale”: the baroque-flavored single eventually sold in excess of ten-million copies.

Procol’s lineup was in constant change throughout its first heyday. By the time of 1977’s “Something Magic,” Trower and Knights had long since departed. But the band’s consistency of musical vision endured throughout that period. All ten of the band’s sixties and seventies releases charted in the United States, though the group enjoyed less success at home in England, where only six records made the charts.

In North America—where Procol Harum toured regularly—the band’s biggest success after “A Whiter Shade of Pale” was a live album, “Live in Concert with the Edmonton Symphony Orchestra.” At a time when rock-classical hybrids were popular (and, more significantly, practical to mount live onstage), the 1972 Edmonton album was a smash, earning a gold record in the U. S. A breathtaking new arrangement of a song from the band’s debut album, “Conquistador” rose to the number sixteen spot on the American Top Forty chart as well as number seven on the Canadian singles chart.

After “Something Magic,” the band went inactive, with its members going on to other endeavors. Brooker launched a solo career, and toured as a member of Eric Clapton’s band. In subsequent years he also played in former Rolling Stones Bill Wyman’s group (touring only in the U.K. and Europe), sang on George Harrison and Alan Parsons Project sessions, and joined Ringo Starr’s All-Starr band. With all that activity, there wasn’t much reason to expect that Procol Harum would ever return.

But it did. In 1991 the group was reactivated, initially with a lineup that included the most well-known members from its prime era. The band toured throughout the decade, but other than 1991’s aptly-named “The Prodigal Stranger,” there was no music from Procol Harum.

By the start of the new century, the band’s lineup changes slowed. For more than a decade now, the band—as ever, led by Brooker—has had a consistent lineup, and toured widely. And in 2017, the almost-unthinkable happened: Procol Harum roared back with a new album.

With lyrics by another poetically-leaning wordsmith (Cream lyricist Pete Brown), “Novum” carries on the band’s tradition of tuneful, literate and ambitious works. And Brooker, who was awarded his MBE from the Queen in 2003, says that plans are already under way for another record. More than a half century after “A Whiter Shade of Pale,” Procol Harum shines on brightly.