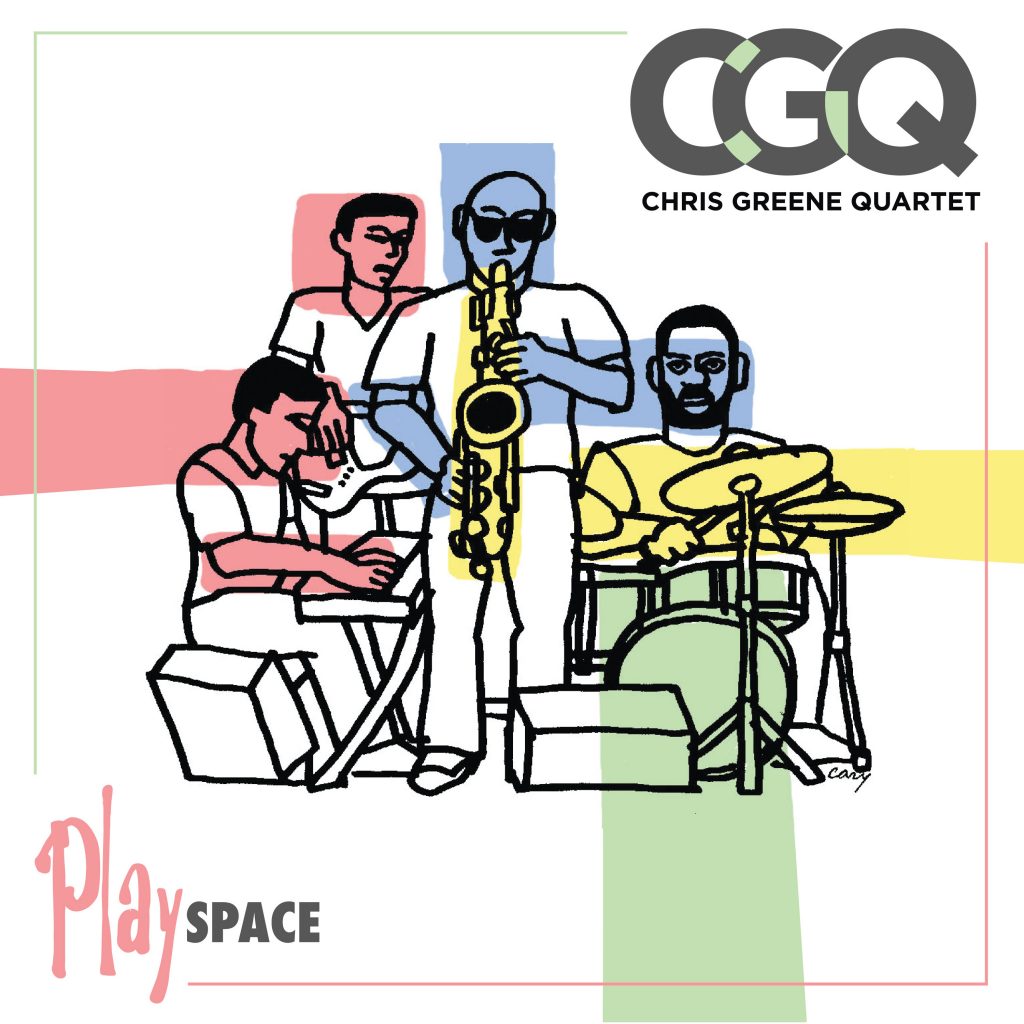 Chicago’s Chris Greene Quartet has a February 17 show at Evanston’s SPACE, the venue where, on January 18 of last year, they played a memorable gig that had patrons whooping, cheering and leaping to their feet. It’s no surprise that the ensemble should be returning.

What is surprising is that two days in advance of the show, the quartet has released an unannounced live recording of that January 18 set. Called “PlaySPACE,” the live album is available digitally and a limited-edition CD will follow.

CGQ isn’t the first music act to drop a surprise album. In recent years, we’ve seen out-of-nowhere releases from everyone from Beyoncé to Wilco. As a marketing gimmick, it’s got something to recommend it. You can’t really listen to “PlaySPACE,” for instance, without ending up wanting to go see CG… well, play SPACE.

A cowcatcher drumbeat scoops you into the opening cut, “Blues for Dr. Fear,” which lays down a seriously trucking groove, Greene’s sax line bounds along with brio, eventually busting into a solo that’s one long, lilting line after another; if jazz had beaten rock ‘n’ roll to inventing the surf genre, it might’ve sounded like this. When the sax finally cedes the stage, more than halfway to the cut, keys player Damian Espinosa tools in with such chill savoir-faire that you can almost feel the temperature drop. Clearly everyone is working his own particular mojo at career-best levels, which may explain why the band bestowed this gig’s audio to the unwary masses.

Things are less sure-footed in the follow-up, “Thunder Cut,” which opens on an arrested freefall, as if Greene had tripped over his shoelaces, then lurched on and on without ever quite hitting the sidewalk. A big disorienting free-for-all follows, which somehow makes a coherent sonic statement, possibly because these players have worked together for so long they can calibrate their chaos. The effect is like four separate guys struggling with unruly umbrellas in the same gust of wind. Particularly in synch are Greene and Steve Corley on drums; there are a few moments when Greene starts stuttering, and Corley skitters around him as if he’s afraid of getting stepped on. It’s an exciting and almost comic piece, a bunch of musicians paradoxically showing how tight they are by going off on their own furious tangents. Corley gets a long solo at the end of the tune where he gets to strut and swagger, which makes up for his largely reactive role earlier on. He’s not shy about making the most of it.

In “Clean and Clear,” Marc Piane’s swaying bass line provides the rope bridge for the other players to weave and wander along in this eastern-influenced tune, which Greene threads through with goddamn snake-charmer seductiveness. Espinosa takes over and swells the piece with a waterfall of cascading chords, which wind down into a kind of post-coital flurry, to which Piane’s solo comes across, quite thematically, like a cigarette in the dark: intense, reflective, evanescent.

“Three and Six,” a graceful tune in waltz time (which you may have twigged from the title), is the most conventional cut in the set, but that’s not to say it’s conventionally pretty or tail-wagging in any of the usual crowd-pleasing ways. It’s got a genuine astringency to it; the soloists are almost alone in the foreground, as everyone else offers the most restrained support imaginable (the kind that proves how much less really is more). It builds in intensity to a thrilling athleticism right before it ends, on an enticingly unresolved chord. Sophisticated work.

A rousing minor-key number, “The Crossover Appeal (Uno Mas)” is an anthem for swaggering across your home turf. It flexes with power and takes more than a few muscular jabs, but it’s all for show. There’s no threat here, just gorgeous, turbo-charged sonic display.

The quartet ends the set on a cheeky note, reworking Wayne Shorter’s “Speak No Evil” into a Latin groove, that also gives Corley another chance to pull down the roof, the walls, and anything else within earshot. I’m guessing Shorter will be fine with it; as it’s pretty much irresistible. You don’t have to take my word for it; just listen to the reaction of the SPACE crowd when it’s over.

Then maybe, I don’t know… Be part of the next SPACE crowd to get face-time with these guys, on the 17th. Just an idea.

“PlaySPACE” is available from the usual sources, as well as on the Chris Greene Quartet’s website. The Quartet plays SPACE, 1245 Chicago Avenue, Evanston, February 17 at 7pm. evanstonspace.com; $12-$20.