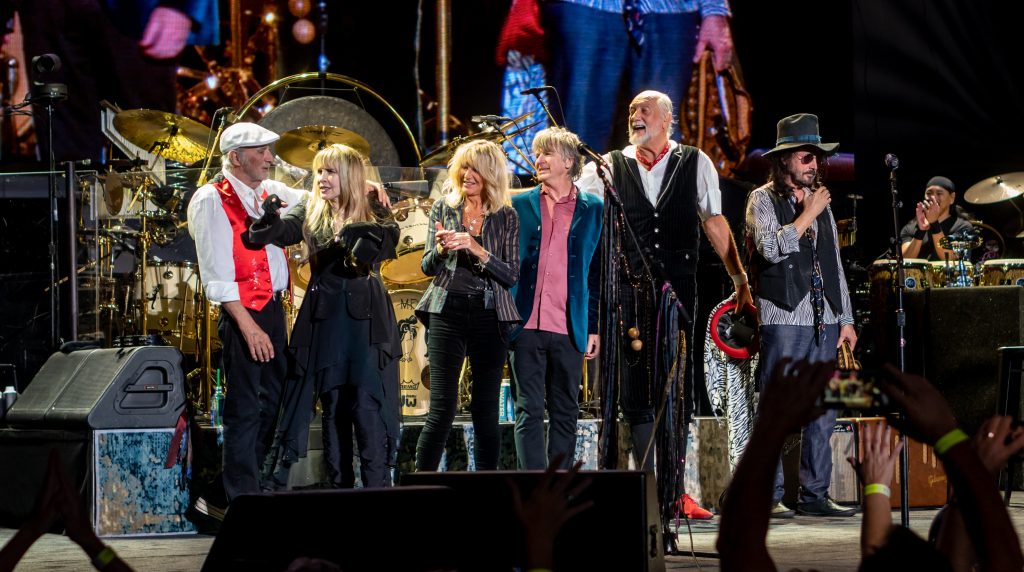 There have been quite a few groups named Fleetwood Mac, and some of them sound nothing at all like the band that scored a string of soft-rock hits from the juggernaut success of 1977’s “Rumours.” In the beginning, the band was billed as Peter Green’s Fleetwood Mac, and featured a hotshot young blues guitarist who had taken Eric Clapton’s place in John Mayall’s Bluesbreakers. That group’s rhythm section—drummer Mick Fleetwood and bassist John McVie—are the only consistent characteristic of the band’s fifty-three year history.

The early Mac was a British blues powerhouse that rivaled Cream at its best. Featuring three lead guitarists (Green, Danny Kirwan and Jeremy Spencer), the group was still capable of lean and sinewy blues, pastiches of rock ‘n’ roll oldies and even the occasional ballad. Typical problems of the era (substance abuse, mental illness, religious cults) eventually doomed the original lineup. By the early seventies, former Chicken Shack vocalist and keyboardist Christine Perfect had come on board. She eventually married (and divorced) bassist McVie but kept his surname.

American guitarist Bob Welch (who went on to an intermittently successful solo career of his own) fronted Fleetwood Mac for a time in the mid-1970s; his “Sentimental Lady” from 1972’s “Bare Trees” would be one of the retooled group’s first soft-rock successes, and pointed the way toward its future.

California duo Lindsey Buckingham and Stevie Nicks joined the group in 1975, starting Fleetwood Mac’s most high-profile era of success. “Rumours” and the albums that followed helped define the breezy, slick and radio-ready sound of that era. The band’s interpersonal dramas kept the group in the entertainment press and became as much a part of Fleetwood Mac’s collective personality as its music.

Always a volatile mix, the most well-known lineup (Fleetwood, Buckingham, Nicks, McVie and McVie) held together for more than a decade before splintering in the 1980s. But even with replacement members—a seemingly random and endless list that included Dave Mason, Billy Burnette and Bekka Bramlett—the hits continued to come. The most popular lineup reconvened briefly in 1997, but Christine McVie soon departed. That lineup’s members (save John McVie) have all had solo careers ranging from modestly successful (Fleetwood) to massively popular (Nicks).

By the late 1990s, Fleetwood, Buckingham and the McVies had settled in enough to continue as a foursome; that aggregation remained intact through high-profile tours. While the band’s newer music continued to sell, there was little doubt that the fans who paid top dollar to see the group live were there to hear the hits of yesteryear. Acknowledging that reality is the fact that Fleetwood Mac’s most recent album release is 2003’s “Say You Will.”

Recalling at times the band’s tumultuous days of the 1970s, Fleetwood Mac endured another potential setback when Lindsey Buckingham—one of the group’s two primary songwriters—was summarily fired in 2018. Continuing the band’s always-perplexing personnel decisions, Buckingham was replaced for the current tour by not one but two musicians, admittedly superb: former Tom Petty and the Heartbreakers guitarist Mike Campbell, and former Split Enz and Crowded House singer-songwriter-guitarist Neil Finn. It remains to be seen if this new lineup yields anything in the way of new music. Both Campbell and Finn have thriving careers on their own. But the six-person lineup, backed on tour by a gaggle of top-flight auxiliary musicians, should have no problem bringing soft-rock classics of the past to current-day audiences.