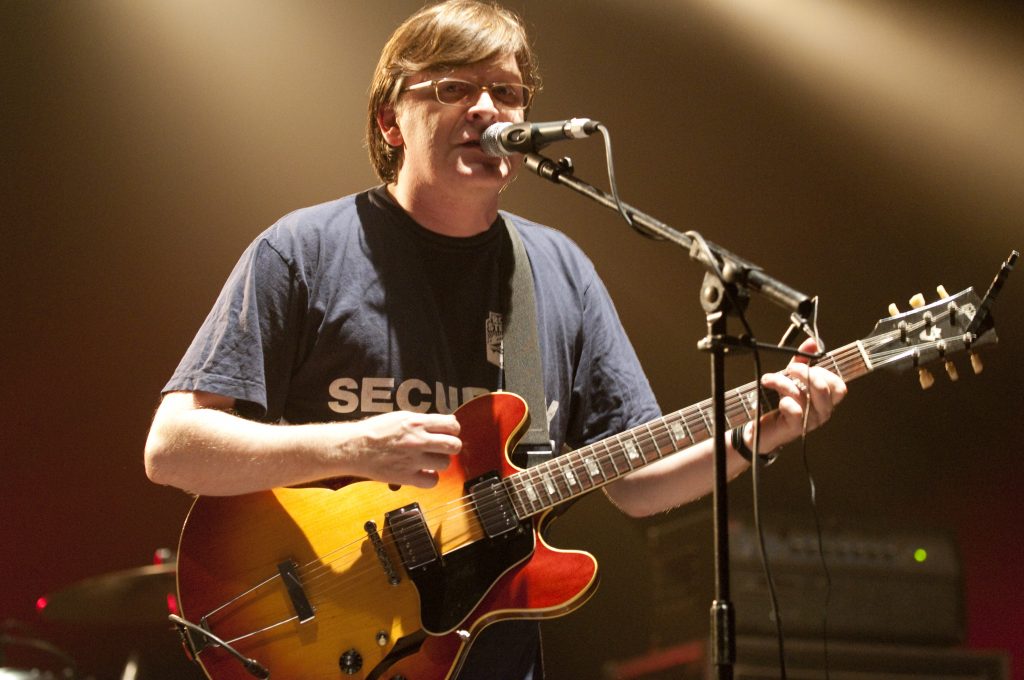 Rock ’n’ roll prognostication is the defining characteristic of a certain breed of music obsessive. The rush of being among the first to discover a great new band is twofold. You fall for the sound and early fury, sure. But you also go in for that anticipatory thrill, the fact that you know something the world has not yet, but will soon, discover. This, of course, will be due in no small part to your zealous advocacy: Wait until you hear this song. You’ve got to hear this song. This band is going to be huge.

Zealous rock prognosticators will get it wrong sometimes—even spectacularly wrong. Count us among those who in the fall of 1991 discovered Teenage Fanclub’s “Bandwagonesque,” played it in rotation with Nirvana’s “Nevermind,” and then fell to prognosticating. Both bands generated buzz worthy of alcohol-fueled debate. Surely, one would take over the cosmos. Our vote was clear: “Teenage Fanclub, that’s the group that’s gonna blow up. Nirvana, well… maybe.”

So much for foresight. Perhaps the fact that Teenage Fanclub made its U.S. debut on “Saturday Night Live” alongside guest host Jason Priestley of “Beverly Hills, 90210″—then one of the most popular teen idols in the world, now a symbol of that brief, bygone moment when the nineties had not yet shaken off the eighties—was a neat bit of foreshadowing. Because it didn’t take long for Nirvana—amid the miseries of troubled frontman, Kurt Cobain—to emerge as not only the biggest band of the decade, but as poster boys for cultural sea-change. All that grunge and post-punk Northwest angst thrashing in lumberjack plaid made itself as felt in the pages of Vogue and Time as well as Rolling Stone and NME.

And Teenage Fanclub? This often-brilliant, still-recording Scottish band, fronted by songwriters Norman Blake, Raymond McGinley and Gerard Love, has remained a musical force in the United Kingdom for nearly three decades while retaining a devout following across Europe, the United States and Japan. Still, they never achieved the mainstream success, or cultural cachet, that Nirvana enjoys. Which is both a shame, and a mistake.

So how did Teenage Fanclub become relegated to a cult favorite? It may have to do with the power-pop genre the band is often categorized under. Power pop has spawned an extraordinary body of music made by a long list of “Damn, they should have been bigger” artists and acts: Nick Lowe, Big Star, The Records, Matthew Sweet and Material Issue, to name just a few. Blending the radio-friendliness of the biggest hits of the Beatles with the edgier guitars of that band’s infinitely cooler and less-played recordings (“Hey Bulldog,” “Your Bird Can Sing”), power pop is a genre that should have something for everyone. But it’s the hill far too many great bands die on, at least when it comes to enduring, global appeal.

Teenage Fanclub played at the dead center of power pop’s evolving possibilities early on in their career, mingling pristine, accessible tunes with all that’s new and now. The influence of Big Star and Todd Rundgren looms over  the band’s early records, but so does the post-punk fuzz of The Jesus and Mary Chain, Dinosaur Jr. and The Pixies. The story goes that founding members Blake and McGinley got themselves into a Glasgow recording studio after having their minds blown at a Dinosaur Jr. concert. The result was Teenage Fanclub’s first British album, “A Catholic Education.”

Less crazed than anything Dinosaur Jr. ever recorded, closer overall in its flirting with acid-bluesiness to the best of Sonic Youth, “A Catholic Education” doesn’t feature songs so much as excuses to indulge in one long, delightfully amateurish jam. In truth, there’s little that is pop about Teenage Fanclub’s first album, which conjures images of three enthusiasts dragging guitars through mud, then playing them on amps left out in the rain and ready to short out any minute.

Still, there’s no way one can fully appreciate “Bandwagonesque” without an immersion in that first genre-bending record. But Teenage Fanclub’s breakout 1991 album was something new: a perfect assembly of timeless power pop and nineties musical edge.

Early nineties indie rock was—with apologies to the Kims Deal and Gordon—too bro-ish for its own good, which is part of what makes the album’s first track, “The Concept,” seem so forceful and fresh. That opening burst of stings-the-ears feedback quickly gives way to a sound that is minor-key melodic—think buzz-sawed Beach Boys—and lyrics that are unabashedly feminist: “She wears denim/ wherever she goes/ Says she’s gonna get some records/ by the Status Quo/ She won’t be forced/Against her will/Says she doesn’t do drugs/But she does the pill.” The song is an ode to a woman who is subject, not object, an homage to female independence with just a touch of alt-girl obsession.

“Bandwagonesque” is that rare album without missteps. “Star Sign” and “Alcoholiday” sound sprung fully formed from the beginnings of guitar pop, and among the less-noticed tracks, “Sidewinder” is a gorgeously understated crush song given to the inevitable overestimation that is at the heart of love: “Then again you’re just a thought/ You think I’m lying but I’m not.” Nothing on the album feels that new, yet nothing feels derivative. All that gangly, just a bit too sloppy guitar, that unexpected shot of violin, that exhilarating instrumental track served up with a wink and nod — yes, we’re listening to The Cure, too—delivers a solid shot of power pop. But there’s something far less pristine nipping at its heels.

No wonder Teenage Fanclub soon became a favorite of fellow musicians, the band name-checked by Kurt Cobain, Radiohead and Sonic Youth. Their European tour with Nirvana seemed a ready-made launch, and for a while there was some confusion—Teenage Fanclub’s members seemed to share it—as to whether they might be part of a grunge revolution. Maybe that’s why the band’s follow-up, “Thirteen,” feels like the product of an identity crisis. The guitar sound falters at times, too enamored of grunge, yet too mellow to be moving. The songwriting is stuck on Alex Chilton rather than inspired by the futures for pop he opened. It’s not a bad record, just a banal one.

But in 1995 the band took another turn, intent on ridding themselves of the specter of grunge and all it had come to represent. Some of us mourned the forsaking of all that beautiful feedback: it was as if the band lost their collective fuzz pedal while on tour and decided never to replace it. But the sound on Teenage Fanclub’s fifth record, “Grand Prix” was clearer and cleaner, placing them unapologetically back within the power-pop orbit: “Moved my feet to a different sound/ Tried to find what was left unfound/ It’s funny how it lets you down.”

The album’s height, “Sparky’s Dream,” is arguably the most perfect song the band ever recorded. Definitely, says the eternal power-pop fan, a Teenage Fanclub track that should have topped the charts. With its guitar-bouncing beat, and pitch-perfect falsetto harmonies, “Sparky’s Dream” possesses the ache of every never-to-be-fulfilled wish, when you’re “fading fast and taking this too far.” Yet its gorgeous sound makes you want that wish on repeat.

There has always been an anti-pop star modesty about the band. They mean business when it comes to the music, but as Gerard Love said in an interview, “It’s the idea of being a pop star we don’t take seriously.” Predictable, then, that despite having made some of the most revered indie music of the early nineties, Teenage Fanclub failed to catch the next big musical wave, Britpop. The band’s sound wasn’t as lush and over-the-top as Blur, Oasis, Pulp or Suede, acts that rose to dominance in the mid- to-late nineties, and its members lacked lacked the fierce, working-class irony that characterized many of Britpop’s front men (and they were, in fact, mostly men). This didn’t stop the self-aggrandizing glam boy of Britpop, Neil Gallagher of Oasis, from breaking free of the delusion that his was the only act that mattered long enough to declare Teenage Fanclub the “second-best band in the world.”

Moving outside the British mainstream may have been a blessing in disguise, because Teenage Fanclub went on to record masterpieces in 1997 and 2000. “Songs from Northern Britain” was a risky, wholly admirable swerve away from the power-pop sound that made the band’s name. In this collection of ballads, you feel the band slowing down to finally see what’s happening around them. At times nakedly sentimental, the album is a rock ’n’ roll pastoral, on the level that few have pulled off. (The Kinks’ “Village Green Preservation Society” comes to mind.) It’s an ode to innocence and retreat from what Wordsworth would call “the world too much with us,” a record wholly sincere and just shy of maudlin.

There’s something distinctly countercultural about the entire enterprise, which may be the most rock ‘n’ roll thing about it. “Songs From Northern Britain” makes a compelling case that the city, in all its rock ‘n’ roll glory, for all its cultural it-ness, is no longer where it’s at. “Ain’t That Enough” is sung to an urban audience that fails to see natural mysteries all around. “Here is the sunrise, ain’t that enough?” “Speed of Light,” another ode to being at one with the universe, features the greatest hook Teenage Fanclub has ever written, layered woo-hoo-hoos that ride a peace-and-love vibe, and feature the band’s best love lyric—“Only you and me add up”—sung in a progressively mounting incantation that feels like a walk-up to transcendence.

With their 2000 record “Howdy!”, Teenage Fanclub embraced the pure pleasure of writing rock that feeds on well-worn ideas, often their own, and dared anyone to accuse them of recycling. “Dumb Dumb Dumb” showcases an irresistible guitar lick that almost has some punk left in it, while “The Sun Shines For You”—is there a more bubblegum sentiment?—tests the adage that all you need to write a great love song is a heart once broken (and preferably still broken) and the belief that music will repair it.

How does a band called Teenage Fanclub age? Gracefully, it turns out. The band’s three original albums since 2000—“Man-Made,” “Shadows,” and “Here,” are lovely and melodic but not always memorable. The production is quieter, and there’s a certain sadness at play (which Blake attributes to the Band’s Scottishness). The background music-y quality to these albums (if background music was actually good) still packs plenty of charm. That subtle California influence we feel in the early work is there, this time more Laurel Canyon, less Malibu. Of Teenage Fanclub’s three post-heyday records, “Shadows” is the standout, coming off buoyant and oddly soothing. It’s solid stuff, often sweet—but without the band’s trademark early-era edge.

Which is why 2018’s vinyl re-release of Teenage Fanclub’s Creation Records output (“Bandwagonesque,” “Thirteen,” “Grand Prix,” “Songs From Northern Britain,” and “Howdy!”) arrives as a much-needed reminder. A reissue is invariably a reintroduction and an opportunity—say hello to all you’ve missed—and the idea that this band’s best work doesn’t loom larger in the rock ‘n’ roll canon weighs on us. We’d like to predict that a new generation of fans is certain to emerge in the wake of the Creation Collection release, and the band’s 2019 world tour, which on March 6 brings it to Metro (3730 North Clark). But we’ve been wrong before.