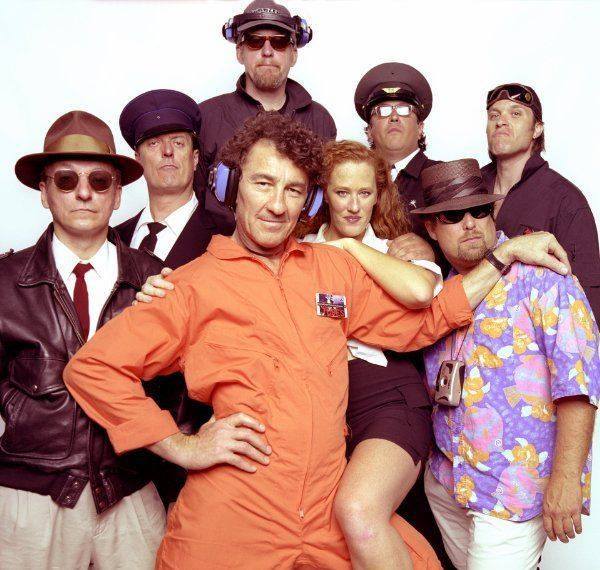 At a time when rock was headed toward a reckoning with the rise of punk—itself a response to the overblown pomp and spectacle of rock concerts—San Francisco band The Tubes decided to have it both ways. Charting an idiosyncratic path that drew from these seemingly diametrically opposed styles, The Tubes ushered the theatricality of Alice Cooper, the musical adventurism of progressive rock and the shock value of cabaret into an intriguing, if sometimes messy whole. Decades later, core members of the group continue, their satire now leavened with nostalgia.

Formed from the remnants of two Phoenix, Arizona bands—the Beans and the Red, White and Blues Band—the Tubes broke onto the San Francisco scene of the early seventies. With a self-titled debut album produced by Al Kooper, the band introduced songs like the anthemic parody “White Punks on Dope” to an unsuspecting world. “Young and Rich” was a more idiosyncratic album, and the band’s third release for A&M, 1977’s “Now,” was even stranger, with tunes like “You’re No Fun”—progressive rock meets the Ramones—and a Captain Beefheart cover.

But it was onstage where the Tubes were best. Acting out outré songs like “Mondo Bondage” and “Don’t Touch Me There,” the band—fronted on the latter duet both by lead singer Fee Waybill and sometime-member Re Styles—brought a motorcycle and leathers onstage.

A 1978 double LP—“What Do You Want From Live”—set out to capture the wild energy that was a Tubes concert. It did so in an era before concert videos were widespread. Even without the visuals, that live set demonstrated just how mayhem-filled a Tubes show could be. And the band’s overlooked musical chops were on brilliant display.

But the albums didn’t sell well. An audience raised on a diet of “Frampton Comes Alive,” “Boston” and “Rumours” didn’t warm to the Tubes’ albums in large numbers. A final album for A&M, 1979’s “Remote Control,” was a concept album, brilliantly produced by Todd Rundgren. “On Remote Control,” the Tubes distilled their assets into a superb record filled with shoulda-been-hits. But they weren’t, and the band was soon without a label.

Surprisingly, Capitol Records intervened, signing the band to a new contract. The first result was another loosely conceptual work, “The Completion Backward Principle.” Showing the band members in short or slicked-back hair and business attire, the album was a satirical look at corporate mindset. The songs themselves were a varied lot, with little or no connection to the concept, but that didn’t matter. Hit material like “Talk to Ya Later” and the power ballad “Don’t Want to Wait Anymore” catapulted the band to high-profile status, helped along by the dawn of the music video era on MTV. Music media had finally caught up with the Tubes, and the band built on its success by touring incessantly—something it had pretty much done since the beginning, anyway—and following the Capitol debut with another excellent record, “Outside Inside.” That LP featured a hit, too: “She’s a Beauty.”

For reasons that have never been clear, the next record was a mess, although most band members remain proud of it. “Love Bomb” had a few radio-ready songs (“Stella,” “Piece by Piece”) but on an album with several truly weak tracks, the band again failed in the marketplace. Waybill left for an even less successful solo career, and the band soldiered on for a time. Eventually, founding guitarist Bill Spooner left to get clean, and sober keyboardist Vince Welnick departed for the Grateful Dead (and committing suicide some years later), while synthesizer player Mike Cotten left to focus on set design.

Waybill eventually returned, and the band made an overlooked, good-not-great album, “Genius of America,” and continues touring on a smaller scale. With founding members Waybill, guitarist Roger Steen, bassist Rick Anderson and drummer Prairie Prince, plus new member David Medd on keyboards, the band still has the ability to put on a rousing and highly entertaining show. On the group’s current tour, the Tubes revisit their commercial breakthrough, “The Completion Backward Principle,” in its entirety.