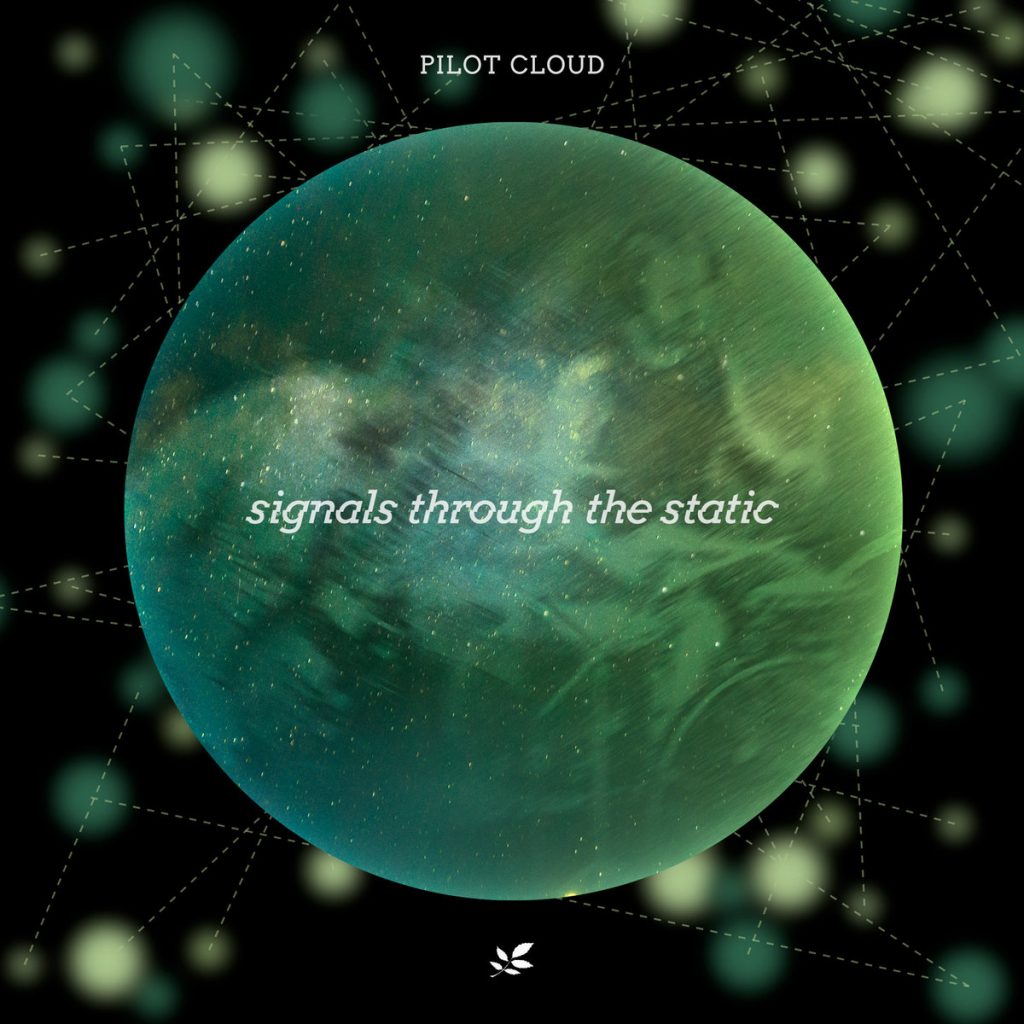 While I hold out hope for post-music, there’s plenty of “post-rock” still to explore. Two recent records speak to the vitality and continued creativity of the genre, boasting a snaky sinuousness as well as a whale’s worth of winning tunes, inspiring purple prose the size of a State Fair blue-ribbon-winning eggplant.

Justin Lerner and Nick Biscardi formed post-rock-shoegaze duo Pilot Cloud in Philadelphia in April 2008 and released their debut, “In Transition” that December. In 2010 Biscardi moved to Chicago, Pilot Cloud dissipated, and Biscardi drummed with local band Rocket Miner, producing their debut EP, “Songs For An October Sky” in 2011, released on his own Jacuzzi Suit label.

The music for Pilot Cloud’s third full-length, the self-released “Signals Through The Static,” was composed via email in 2012 while Lerner and Biscardi lived in different cities, and the songs sat idle for years while they weren’t on speaking terms. Both now call the Pacific Northwest home, although neither knew they were moving geographically closer together when their relocations happened within months of each other. Those 2012 demos were resurrected in 2018, re-recorded and released to commemorate the decade since their debut.

Given all that, it’s remarkable how well this album coalesces, with the throughlines being Lerner’s wispy, winsome tenor vocals and his high-pitched, dueling electric guitar parts accompanied by Biscardi’s pummeling, backbeat-propelled rifle sport drums.

“Signals Through The Static” is all about space… and not just the space of space rock. It becomes clear after repeated listenings and a close analysis of song titles that the album is a metaphor for the space that once existed between Lerner and Biscardi.

The recording begins with a latticework of static on “Twin Hemispheres,” backbeat-heavy drums and rhyming guitars, before building to a majestic electric drone and Lerner’s indiscernible vocal howls coming through as though voiced via megaphone from a distant satellite. It’s neither the best composition on the album nor the right choice for the single (which it was), but they positioned it perfectly as a statement of intent, as if to say, we are still Pilot Cloud and we’re picking up precisely where we left off.

The real thesis is found on the next track, “Worlds Apart,” which begins with a spare and delicate guitar part that builds into an instrumental crescendo that clocks in at almost a minute and borders on headbanging, as much as space rock can, before Lerner sings, “Here we are,” a whole bunch of indistinguishable things, and then a rocking chorus of “All we are is men.” Lerner posits Pilot Cloud’s weak position on Earth and in the universe, before the short instrumental “Return to the Stars” launches the next chapter of fuzzy, guitar-drenched chaos into the stratosphere.

“So Long” begins with a clarion call that speaks to the length of time the duo was separated in space and mentality, building from a slyly underdone vocal part to a full-strength scream, transitioning to the Milan Kundera-quoting, piano-laden experimentation of the next cut, punctuated by static and a faraway guitar.

“Still Life” provides explosions in space, if not in the sky, and the composition hums with electric potential; the title belies its kinetic underpinnings, bubbling and frothing, but never boiling over.

The duality of the duo is reinforced with “Binary Road,” an interview about belief in aliens backed by the sounds of street traffic, serving as an introduction to “The Guardians,” which may express the belief that aliens are advanced beings sent back in time to defend the Earth from the human-generated apocalypse of the Anthropocene age. Again, it’s hard to make out the lyrics, and the sound is far more important, but when on the next track, “Dark Nebula,” collects a voiceover about the transcontinental railroad mixed in with chimes echoing an esoteric music box, it’s hard not to hear the theme of exploration and destruction.

The back half of the album reaches an apex with “Erase The Path,” on which Lerner sings that through “wasted skies… Away we go to find our home,” and builds to a Hum-like apogee, singing “we can’t go back.” With the dynamic musical accompaniment, this is Pilot Cloud at their most chilling and thrilling.

The concluding, sprawling “The Sky Never Ends” comes close to approximating the majesty of their previous masterpiece, “Ex Astris Scientia,” from their underappreciated 2008 debut. In addition to rhyming guitar work and propulsive, battering-ram drumming from Pilot Cloud, it includes some beautiful spoken-word snippets read from “Sputnik Sweetheart” by Haruki Murakami. It ends abruptly, with just the whisper of one last feedback hum, leaving the listener rapt, panting for more. As Murakami’s words put it, “the music had already stopped, the enigmatic performance was finished. I listened carefully, I couldn’t hear a thing, absolutely nothing, no music, no voices, no rustle of the wind.” 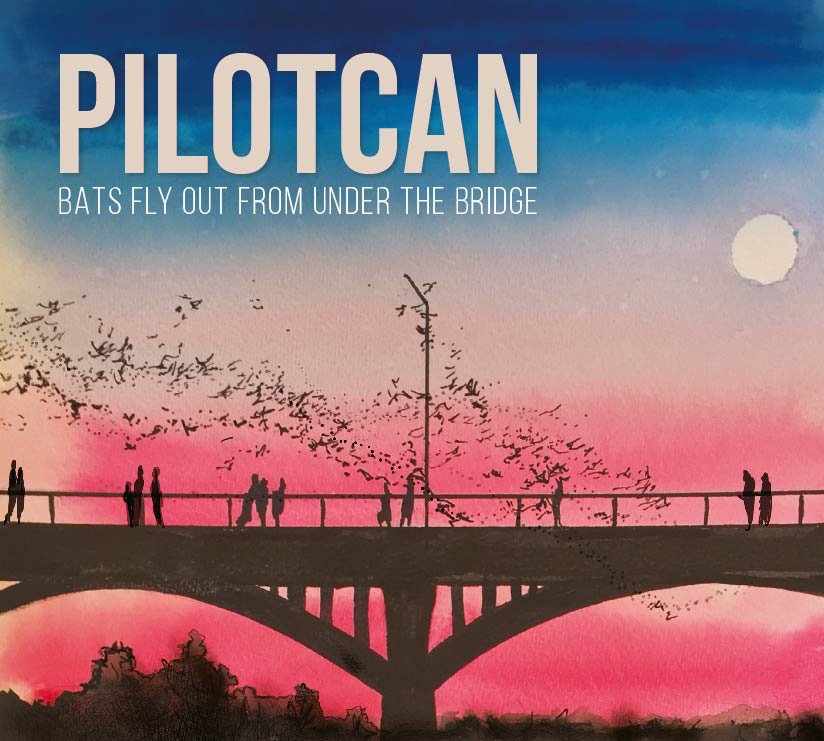 Pilotcan can also be characterized as post-rock, but aside from that classification and their moniker, their backstory differs from Pilot Cloud, even with a similar hiatus.

You can hear echoes of Mogwai’s orchestral pop majesty when “Page, take me to the lair” begins on their fourth album and their first in fourteen years, “Bats Fly Out from Under the Bridge.” After all, the quartet hails from Scotland and released early singles on Mogwai’s Rock Action label. But after that opening track, you can hear much more than those post-rock wunderkinds at work. Indeed, their inspirations are more American—EVOL isn’t just their own record label and the name of leader Keiron Mellotte’s nightclub in Edinburgh (now Dunfermline), it’s also the title of Sonic Youth’s third album. The no-wave NYC foursome are clearly an inspiration on the woozy, shoegazy “Daylight Savings Time” and “(The) Schneck,” both of which could be counted amongst some of Lee Ranaldo’s best work. Even the down-tempo and heavily orchestrated “Slack And Candy” channels some of Sonic Youth’s finest “post-fame” music, a la “NYC Ghosts and Flowers” or “Murray Street,” and “3rd and Bannister” ratchets up the cascading chords in Pilotcan’s most pulverizing fashion.

Sonic Youth performed much of the material from “EVOL” live for the first time in Austin, Texas. It’s unclear whether or not those bent notes permeated the waters of Ladybird Lake, but it is clear that Austin was an inspiration for Pilotcan, to the extent that the album title describes a natural phenomenon of the Lone Star State’s capitol. Confusingly, the song itself sounds like Irish-English shoegazers My Bloody Valentine, but the lyrics for this entire record were inspired by and composed in Austin, and later recorded in their native country.

Ginning up the confusion, after those meaty American-ified (if not refried) rockers in the middle of this musical sandwich, the record is topped off with lovely (and lengthy) string-laden instrumentals in the form of “Heidi and Oscar” and “… Everlasting Happiness.” It’s as if Pilotcan is saying, much like this writing, that the true meaning can be discerned in the haze that’s generated by the music, like a miasma… an aura formed of aftertones.