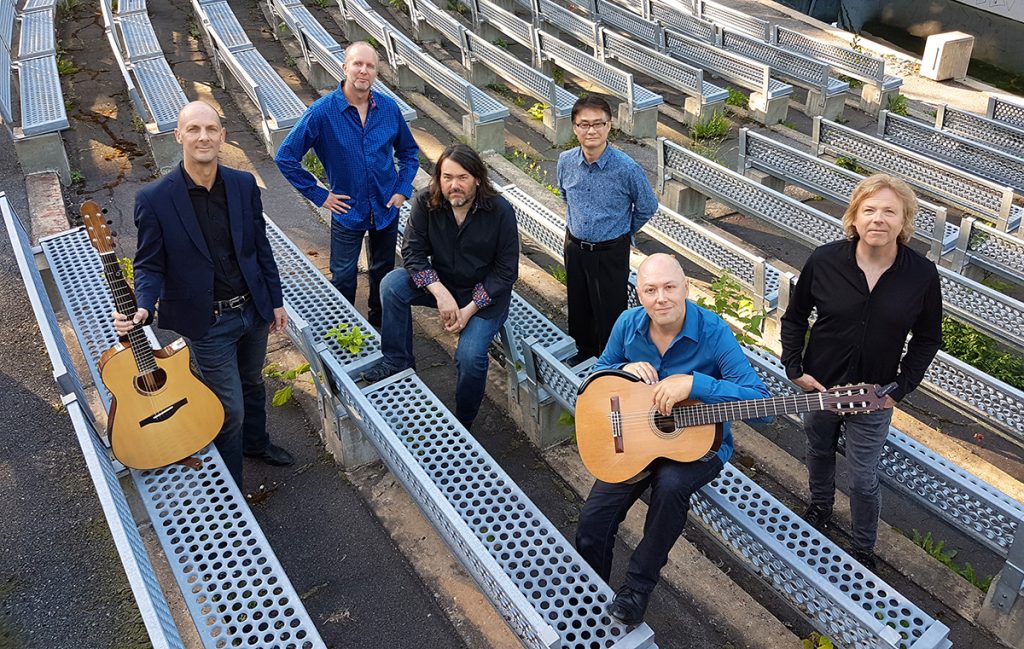 King Crimson prime mover Robert Fripp launched Guitar Craft in the mid-eighties, a course of study that represented a new approach to playing guitar. Focusing on technique rather than theory, and incorporating mindfulness—meditation, you could call it—Guitar Craft grew in reputation and influence. In 1991, three graduates of the program—Japanese guitarist Hideyo Moriya, Bert Lams from Belgium and Salt Lake City-born Paul Richards—launched a group, California Guitar Trio. Built upon Guitar Craft’s concepts and practices, the trio brought a fresh and exciting perspective to the art of playing acoustic guitar.

The unique tuning used by CGT—intervals of fifths, like a violin—gives a unique sonority to the instrument. Against that backdrop, the trio sounds like no one else as it digs into both original compositions and interpretations of the work of others. A prolific and adventurous lot, CGT has released seventeen albums; several capture the sound the group makes live onstage.

Both trios tour to wide acclaim, and in 2009 they took part in a spur-of-the moment collaboration in Montréal that led to a creatively fruitful relationship. In 2011 a live album, “Montréal Guitar Trio + California Guitar Trio  + Live,” documented their combined sonic fireworks. Both trios continued on their own, but have teamed up once again for a tour in support of their second recorded collaboration, “In a Landscape.” The new album features both original compositions by members of both groups and inventive, highly original takes on well-loved songs. Highlights include an arrangement of John Cage’s piece which gives the album its title, as well as a cover of David Bowie’s “Space Oddity.”

Whether the source material is based in surf rock, classical, jazz, pop or progressive rock, it’s safe to assume that in the hands of the combined Trios, the result will be unique, intriguing and musically compelling.