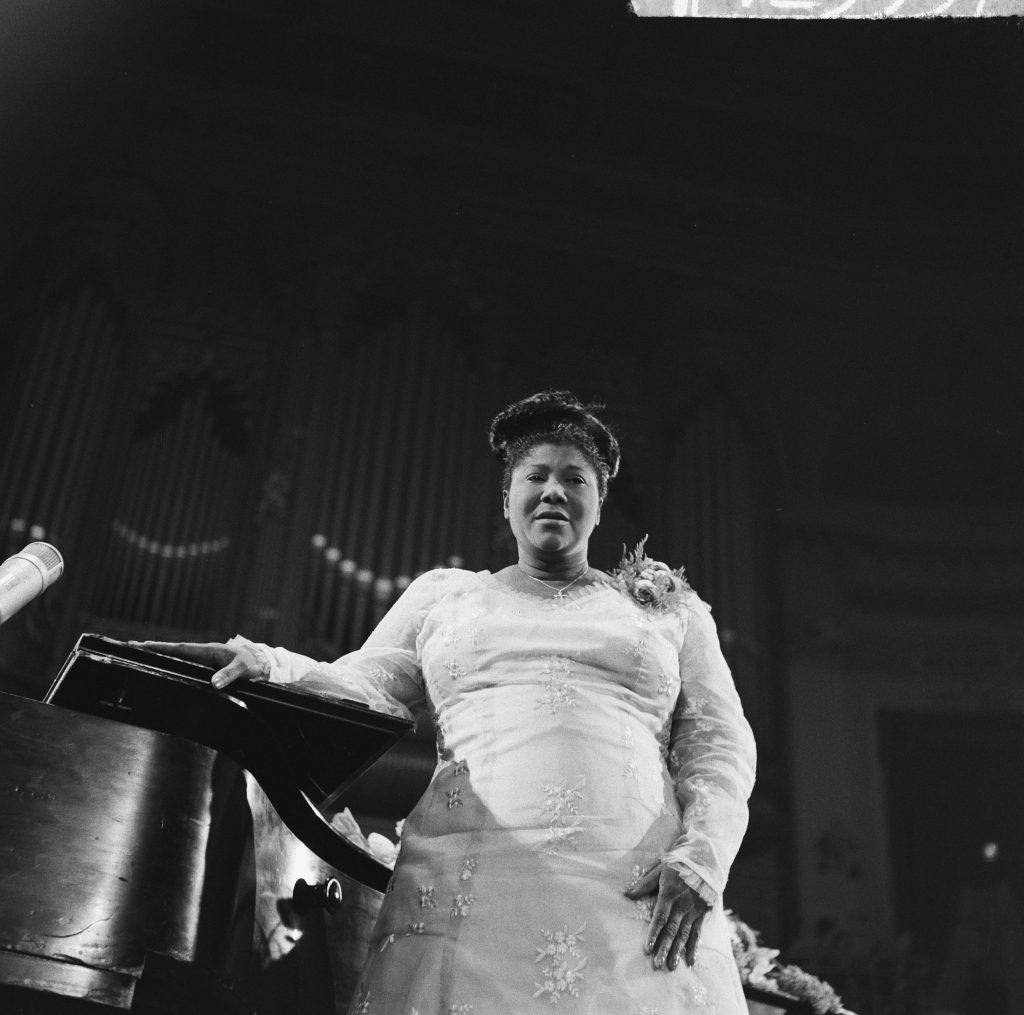 The first great concert film is Ben Stern’s “Jazz On a Summer’s Day,” released in 1960—a full eight years before “Monterey Pop.” It documents a single day at the 1958 Newport Jazz Festival, and it’s a color-soaked, exuberant, wildly high-spirited affair, with a cast of heavyweights that includes Thelonious Monk, Gerry Mulligan, Sonny Stitt and Louis Armstrong. But none has the impact of the closer—Chicago’s Mahalia Jackson, introduced as “the world’s greatest gospel singer,” who strides onstage resplendent in white lace, and with minimal accompaniment gets the crowd on its feet for two roof-raising numbers. In “Walk All Over God’s Heaven,” she growls, purrs and roars while exhorting both the wise (“When we get to heaven gonna put on our robes”) and the wicked (“Everybody talking ’bout heaven ain’t goin’ there”). She follows with the Old Testament-inspired foot-stomper, “Didn’t It Rain,” which she delivers with duly apocalyptic fierceness (“Knock at the window, a knock at the door / Crying, ‘Brother Noah, can’t you take on more?’ / Noah cried, ‘No, you’re full of sin / God got the key and you can’t get in’”). At one point Jackson wanders away from the mic, but her voice continues to barrel out over the assembly, as if to prove she doesn’t need any scrawny electronic crutch to reach whoever’s there to hear her testify. When she’s called back for her encore, a stillness descends so suddenly it seems to have literally dropped from above; then she brings the festival to a close with an exquisitely measured reading of “The Lord’s Prayer.” Stern’s camera passes over the faces of the audience, capturing a collective mood somewhere between raptness and rapture.

Jackson was not a jazz singer, but at the time there wasn’t any real incongruity about slotting a gospel singer as the finale to a jazz festival. Mid-century America wasn’t as culturally stratified as our own era (Chuck Berry makes a memorable appearance in the film as well), and it wasn’t unusual for primetime TV shows and the covers of newsweeklies to feature bel canto belters and bebop brahmins. Music was music; period, full stop.

These days gospel is a niche genre, which means that—with the occasional exception of crossover artists like Sir the Baptist at Lollapalooza—it’s not going to make a significant showing at any festival that’s not exclusively gospel-dedicated. Fortunately for Chicago, the gold standard in that regard occurs annually on our lakefront. This year’s Gospel Music Festival—the thirty-fourth—brings the passion and praise to both the Chicago Cultural Center (May 31) and Millennium Park (May 31, June 1). At press time, the roster of performers had yet to be announced, but the festival’s website made a point of establishing our home-field advantage, declaring gospel “the music genre born in this city.”

That may be an overstatement; but only a slight one. Like most musical styles, gospel’s nativity was a matter of multiple influences (notably hymns, spirituals, blues and jazz) coalescing into something sui generis. By the time it reached the ears of Thomas A. Dorsey, a Georgia native who arrived in Chicago in 1919 as part of the Great Migration of southern African Americans, the music was nearly fully formed. But it was Dorsey who gave it a name—“gospel songs,” he christened them—and in giving it a name, gave it a destiny.

It was a destiny Dorsey himself largely charted, as the composer of what became the earliest songbook of gospel standards, which included “(There’ll Be) Peace In the Valley (for Me)” and “Take My Hand, Precious Lord.” The latter tune in particular illustrates the sharp division between gospel and the blues; Dorsey wrote it after his wife Nettie died in childbirth while he was away on a revival tour—with the baby dying two days later. A bluesman would have turned the tragedy into a gut-wrenching twelve-bar catharsis; Dorsey instead crafted a shimmering musical staircase to carry him beyond grief. “When the darkness appears and the night draws near / And the day is past and gone / At the river I stand / Guide my feet, hold my hand.”

Dorsey co-founded the first gospel choir in Chicago in 1931 at Ebenezer Baptist Church, which was instrumental in popularizing both his own songs and the wider gospel genre. He remained active on the gospel choral scene until his death in 1993, by which time he was universally known as the Father of Gospel Music.

And he wasn’t a single parent. Sallie Martin, who began singing with Dorsey in 1929, earned the title Mother of Gospel by the wide-ranging avenues of her advocacy, which included not merely performing the music, but persuading Dorsey to publish and market his songs nationwide. She also founded a publishing house of her own, exclusively dedicated to gospel sheet music. (Its chief money-earner was the phenomenally popular “Just a Closer Walk with Thee.”)

Which brings us back to Mahalia Jackson—another of the Great Migration’s gifts to Chicago. She was the first bona fide gospel superstar, performing at Carnegie Hall in 1950 and at President John F. Kennedy’s inaugural ball a decade later. She sang at Selma and the March on Washington, and then at Martin Luther King’s funeral, forging a bond between gospel and the Civil Rights movement that is indissoluble to this day.

She’s still referred to as the Queen of Gospel; and again, there’s a corollary… and again, it’s a native son. The Rev. James Cleveland began singing at Pilgrim Baptist under Dorsey, though he was more rootless than his predecessors, leaving Chicago to serve for a time as the music director of a Detroit church before ultimately landing in Los Angeles, where he earned his King of Gospel crown by bringing soul and R&B influences into the genre. For a twenty-first-century reader, however, his most immediate legacy might be his mentoring of a pastor’s young daughter during his stay in Detroit; years later, he reconnected with the young woman when he produced her Grammy-winning album—Aretha Franklin’s “Amazing Grace.”

If Chicago required any further cementing of its status as (in the words of gospel music scholar Anthony Heilbut) “the Vatican and Mecca” of gospel music, we’ll soon have it, in the form of the National Museum of Gospel Music, planned for the site of the reconstructed Pilgrim Baptist Church. But, in fact, the real mark of our centrality to gospel is the festival, which showcases the genre’s glittering present—which now incorporates a range of influences from hip-hop to electronica, and a diversity of talent that assures that gospel’s evolution is ongoing.

At that long-ago 1958 Newport festival, Mahalia Jackson told the adoring audience, “You make me feel like a star.” Each spring in Chicago, her successors can’t but feel the same; all of them stars, and under a single heaven.