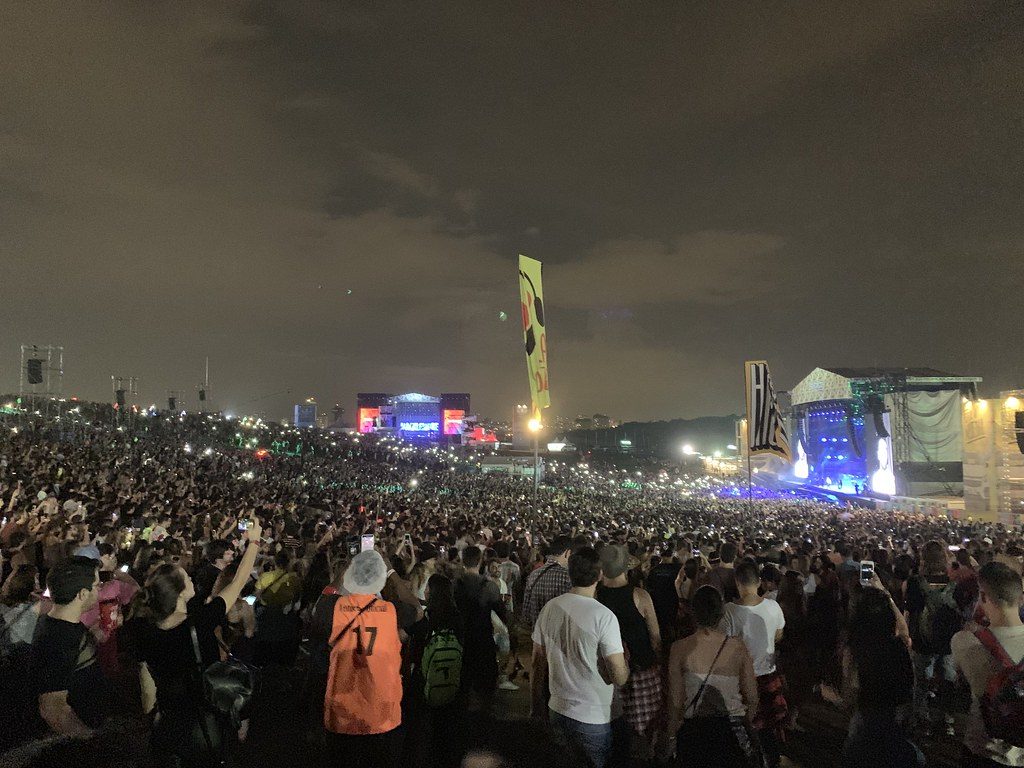 The largely deserved rap on Lollapalooza 2019?

It’s an ode to capitalist excess, not to be confused with excess’ far more interesting cousin, debauchery, a festival that feels resolutely apolitical, a place where one is surrounded by thousands but is too often alone in a sea of people convening with their social media feeds instead of one another.

The Lollapalooza ethos is, in short, a metaphor for modern-day America: disconnected and fractured, a mass of people moving swiftly past one another to get to the next—one hopes, better—show.

And yet. As is always true with the larger music festivals, there are pockets of resistance and transcendence. That was the case when British power punk band IDLES and multi-hyphenate Childish Gambino (aka Donald Glover) took to the stage with two very different, yet ideologically connected, Lollapalooza sets.

The IDLES quintet, led by its improbably charismatic frontman Joe Talbot, is punk band as wrecking crew, lyrically tearing down institutions and brutalizing their instruments with manic, frenzied glee.

That IDLES is anti-fascist, anti-nationalist and anti-corporate is to be expected: punk is a genre where a radical worldview is not radical at all.

True to that form, the band implored its Lollapalooza audience to “Smash it / ruin It / unite!” during its performance of “Rottweiller,” a critique of Brexit featured on IDLES’ most recent album, “Joy As an Act of Resistance.”

Talbot introduced the song by calling out parallels between what is happening in the U.S. and the U.K., putting a fine point on the fact that the white nationalist rise that ails America is part of a larger, global trend. Likewise with the band’s bracing performance of “Danny Nedelko,” an angry denunciation of anti-immigrant sentiment in the form of an insanely good power-punk tune.

Yet what’s truly subversive about IDLES is its feminism. “I find acts of machismo grotesque and violent and antisocial and not welcoming,” Talbot has said. During IDLES’ performance of “Never Fight a Man With a Perm,” the band mocked all things hyper-masculine (“Brylcream / Creatine / Charlie Sheen”) and subverted Nancy Sinatra’s iconic feminist anthem (“These boots are made for stomping/And that’s just what they’ll do”) before vowing to do the most unmanly thing of all: shut their mouths and hug it out.

In its rousing rendition of “Television,” a song Talbot wrote for his daughter, the band decried body negativity (“The bastards made you / not want to look like you / so you pay through the nose / to look like someone else”) without the faintest whiff of victim-blaming. Listening to these lyrics while looking at the IDLES’ Lollapalooza audience was more than a bit mind bending. How often do you see thousands of white men—the crowd had an obscenely high bro quotient—wildly applauding a setlist that is effectively a feminist manifesto?

But that, it turns out, is the band’s secret sauce. “The person I’d most want to come to our shows right now is a sexist, racist Trump supporter,” says Talbot. “Maybe then we might help change someone’s heart and mind. That doesn’t come from patting all the lefties on the back. We’ve got to start from the opposition.”

Donald Glover, who raps under the name Childish Gambino, traversed equally political but also deeply spiritual terrain a few hours later. Rising out of the crowd on a makeshift stage as he sang the opening notes of “Atavista,” Glover was both of the audience and above it. The symbolism would have seemed overblown and egomaniacal if his performance wasn’t so damn good.

“Feel me now! This is some church shit,” Glover shouted at the beginning of the set, “church” being a word he returned to throughout the evening as he implored the audience to put down their phones and enter into communion with him. Erasing the line between singer and audience, Glover made his fans part of the show, imploring them to sing while moving—sometimes backwards—through the masses as he took selfies without missing a beat. (If Glover was the hardest-working man in show business Friday night, his team of bodyguards was a close second).

Plus, there were fireworks.

Part of what makes Glover such a mesmerizing performer is his physicality; the man is never in repose. He slides, shimmies, gets down, leaps up and has the sweat to show for it. It’s not just his body but his face that’s in on the action: Glover’s James Brown-worthy screams were invariably followed by his own shocked expression—Holy Shit, was that me!? He’s watching us watching him, but he’s also, in his mind’s eye, watching himself.

Glover’s best tracks mine a seventies Afrofunk vibe, and he performed more than a few during his set, taking on racism, income inequality and, in his particularly timely performance of “Feels Like Summer,” global warming: “Every day gets hotter than the one before / running out of water/ air that kill the bees that we depend upon / birds were made for singing / wakin’ up to no sound.”

Like a modern-day Marvin Gaye, Glover’s great gift is an ability to craft music that makes us want to move, but also makes us mad. It’s a delicate balance. At times the Lollapalooza audience was so caught up in the overall good feeling conjured by a set list that included “Sober,” “Me and Your Mama,” and “Summertime Magic” that they seemed indifferent to—or unaware of—the political possibilities in the music.

Not so when Glover broke into his anti-gun, anti-capitalist manifesto, “This is America.” It’s a track that served as a bracing palate-cleanse in the midst of all that feel-good funk; a much-needed-in-Chicago reminder of the vulnerability of black bodies.

For his last performance, Gambino gifted the audience with “Redbone,” a track that is so sensual that it moves into the realm of the spiritual, equal parts lust, longing, and political prayer: Stay woke.

The throughline between the IDLES and Childish Gambino Lollapalooza sets was, at base level, political: these are artists calling for real change, in real time, musical prophets conjuring worlds they know and injustices that too few see. Glover and Talbot are also male artists redefining the very idea of masculinity, rejecting the violent and toxic while seeking joy, transcendence and communal love.

“You are the future, love yourselves” Glover shouted out near the end of his set. Hours earlier, to a very different audience, Joe Talbot closed the IDLES show with a nearly identical plea. In this rage-filled political moment, a call to love may seem soft, ineffectual and inadequate. But it bears remembering that love is the most radical commandment of all.