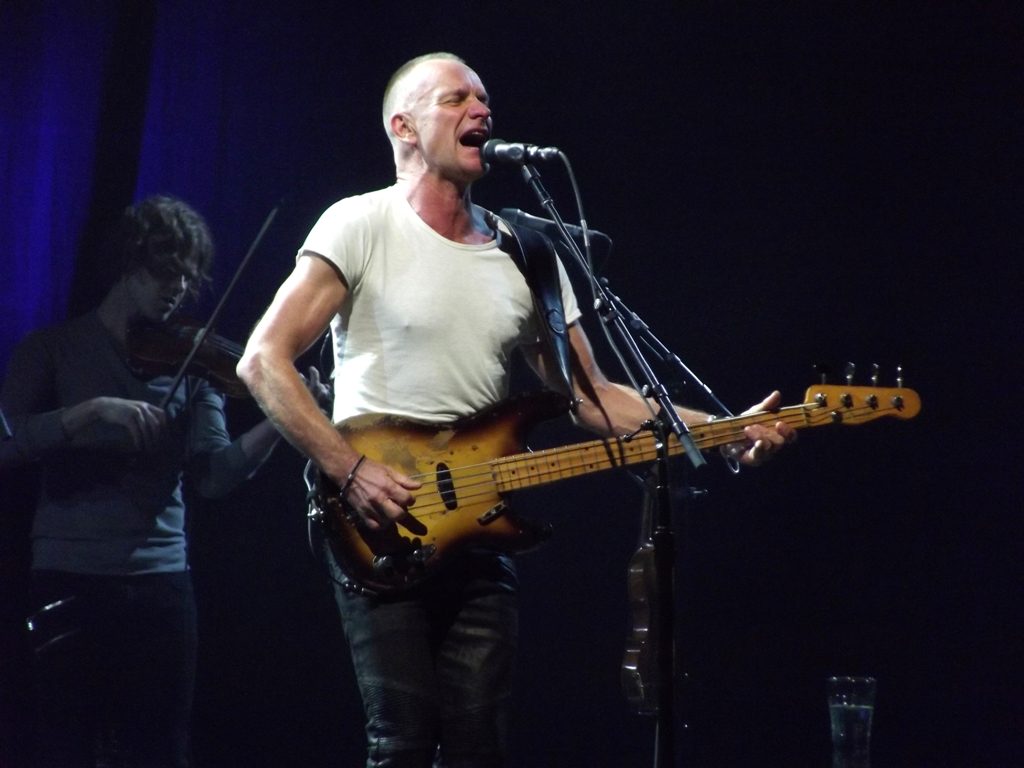 Thinking back today, it doesn’t seem surprising that Sting cut his musical teeth in a jazz fusion band. As bassist in the band Last Exit, the British musician developed and displayed his keen abilities on bass and vocals. But by 1977, he was focusing his energies on a very different style, the reggae-influenced “new wave” sound of the Police. As frontman for the trio, Sting (born Gordon Sumner) brought a long string of popular songs—nine Top Forty hits in the U.S. and twice as many in the U.K.—and five staggeringly successful albums, all of which went platinum (four million units sold) four times over.

The multiple-award-winning group called it quits in 1984 after completing a worldwide tour in support of “Synchronicity,” its biggest-selling album. Less than two years later, Sting made his debut as a solo artist, with the very un-Police-sounding “The Dream of the Blue Turtles.” Much of the grit and edginess of his former work was gone, but in its place came a refinement and continuation of the musical ambition found in late-period Police tracks. For his backing band, Sting chose musicians who were well-versed in the jazz idiom, and while the approach to the material may have confused some Police fans, in truth it represented a linear progression from Sting’s Last Exit days through his more recent work.

Even with a jazzier and more urbane musical character, Sting still landed hit singles. “Dream of the Blue Turtles” features no less than four Top Forty tunes: “If You Love Somebody Set Them Free,” “Russians,” “Fortress Around Your Heart” and “Love is the Seventh Wave.” In concert, Sting and his band reimagined Police hits like “Driven to Tears” in a style that fit his new approach.

Subsequent albums fared well critically and in the marketplace, and buoyed by their success, Sting continued to pursue his particular muse. Even a concept album, 1991’s “The Soul Cages,” spawned hit singles. Detractors may have felt Sting was becoming pretentious with his solo work, but successes like the 1993 album “Ten Summoner’s Tales” proved that there was a massive market for Sting’s style of music. Sophisticated tunes like “If I Ever Lose My Faith in You” appealed to the romantic impulses in listeners, and several of the album’s best deep cuts showed a sharp sense of humor.

Today Sting’s solo catalog boasts more than a dozen studio albums. He may not rack up the hit singles, but he remains a compelling writer, musician and performer. Sting’s latest studio release is “My Songs,” a career survey that reinterprets his earlier work both by remixing and creating wholly new recordings of songs like the Police’s “Every Breath You Take” and “Roxanne” and solo favorites like “Englishman in New York “ and “Fields of Gold.”