My story that sparked her memory is about ghosts of children escaping stories-high flames as hundreds die during a Chicago musical performance 115 or so years before.

We nod, cock our heads that way. “David Berman,” we mouth.

At the crook of the bar near the front of the Rainbo Club in Ukrainian Village last July, with large glasses askew and thinning but longish hair astir, David Berman’s face was lit from below with the ice glow of the screen of a laptop. Other things scattered: cords, notebooks, notes. Pens. Pencils? A hard drive? He was transfixed but his fingers danced. 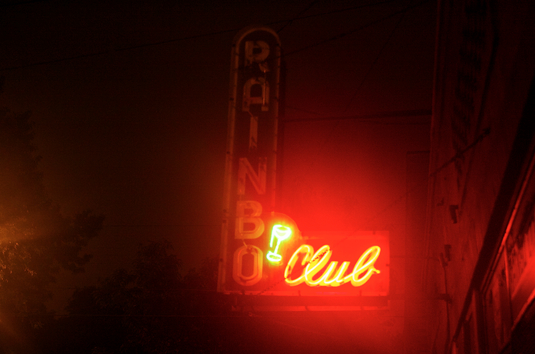 DB looked up as O approached, scruff-bearded face in soft profile from the light. He smiles. “Do you like music?” he asks—she hears, I read—gesturing at the stool next to himself.

A bartender told me the other day that once a month or so he’d come in, contented to be distracted by hellos or questions. Out of the house wasn’t such a bad place. He would look up from his notebook or his silver laptop and offer a shy smile. Conversation usually followed.

The neighborhood in the nineties: that guy. Corner of the room, sport coat, handsome face, skittish. I’d see him. One night, envious, I watched him intently speaking to P—P, who was always ready to be stroked with words, open to rainfall of words, the tattoo of language rising from those handsome faces on odd, compelling men.

Then “Starlite Walker” and “American Water,” and of course, “Actual Air,” lines indelible but plain, on his ineffable plane. Heartsong. 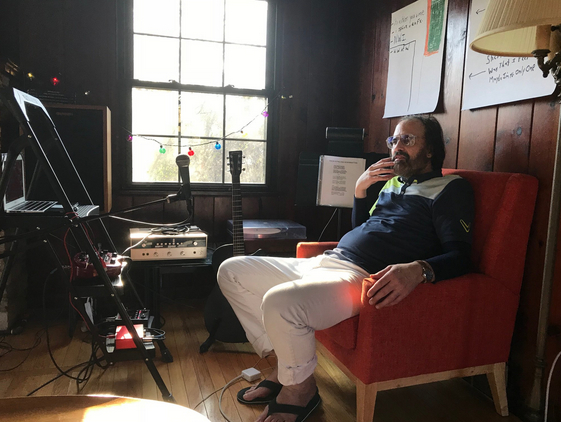 O was awed by the simple serendipity and who would remember lyrics from a moment like that, pleasantly surprised to find a poet nearby, right there at hand, who was pleased to share new, yet-to-be-known sounds. It was warmth, not words. Who had heard these words, the succession of sounds, but this stranger by nighttime, and another, and likely others? How much made it to “Purple Mountains”?

On that final album, “Snow is Falling in Manhattan”:

Songs build little rooms in time?
And housed within the song’s design
Is the ghost the host has left behind?
To greet and sweep the guest inside?
Stoke the fire and sing his lines

That midsummer night, David Berman kept at his post at the crook of the bar. White light on face, halation, white reflected on smudged lenses, halo.

David Berman is buried now. The last lyrics of that last album go like this:

Bended knee, honeymoon,
Nursery, another soon,
Into my mind, the thought begins to seep
If no one’s fond of fucking me,
Maybe no one’s fucking fond of me
Yeah, maybe I’m the only one for me

One summer night, we let him be. I showed O a picture of the angelic child from history rising above my unfinished story. She said more about that summer-school summer with the aching sounds and creaking boats and voices in the distance that rose, nearly distinct, meshing into the brittle sound of night that is the middle of nowhere.

David Berman died on August 7 in Brooklyn, at age 52. His funeral was held over the weekend in Nashville.

Ray Pride is Newcity’s film critic and a contributing editor to Filmmaker magazine.

His history of Chicago “Ghost Signs” in words and images is in the works. Previews on Twitter (twitter.com/chighostsigns) as well as photography on Instagram: instagram.com/raypride.