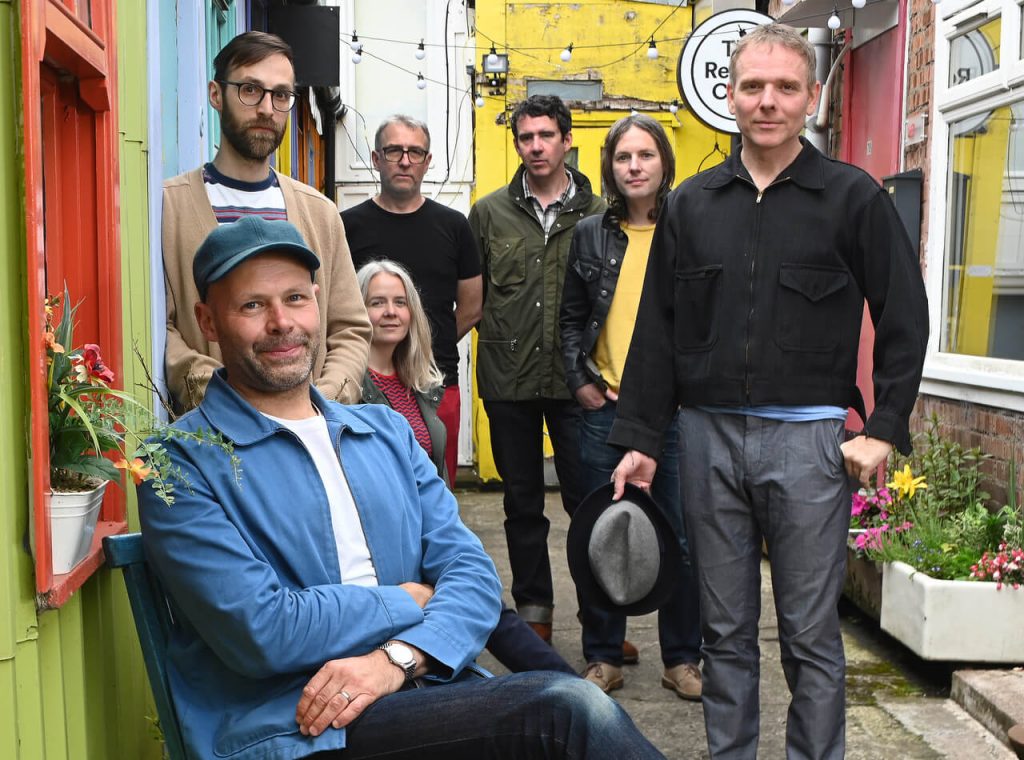 I’ve always enjoyed listening to movie soundtracks; although since “Days of the Bagnold Summer” won’t have its theatrical release until sometime in 2020, there’s no chance of seeing it before Belle and Sebastian’s soundtrack comes out this month (September 13, Matador).

Given that the group was born in a haze of obscurity in the pre-Internet age and took their moniker from an obscure short story read by Stuart Murdoch, prompting a “stars-aligning” meeting with original member Isobel Campbell shortly thereafter, it somehow makes sense to write about a band whose titular inspiration I haven’t read, for a soundtrack to a movie I haven’t seen, based on a book I haven’t read.

As you might expect, if you’ve heard their earlier records, it’s gorgeous, vintage orchestral pop, the group’s specialty since it was formed in 1994 by Murdoch and Stuart David (who left in 2000). They’ve produced an estimable collection of chamber pop with a clever, humorous approach across ten full-length albums now (as well as numerous EPs and singles), perhaps picking up the gauntlet thrown down by the Smiths following their 1987 dissolution. Yet the Smiths analogy goes only as far as their acoustic approach and insouciant cleverness; B&S have never possessed the sardonicism (some would say nastiness) of the Mancunian quartet. In fact, they seem to be inspired by Murdoch’s wide-eyed innocence and optimism.

The film “Days of the Bagnold Summer” is based on a 2012 graphic novel by Joff Winterhart, and although Murdoch didn’t read it until being approached by its producers, he says its “style and its atmosphere set me off straightaway. I read it on a Friday, and by Monday I pretty much had all my ideas lined up. What was great was that Simon [Bird] hadn’t shot anything then. You want to get in early, because that way you can start having late night conversations with the director about ‘The Graduate,’ or whatever. We all have fantasies about those great movies of the sixties and the seventies. If you are going to get involved with a project like this, you want to do it right.”

“Days of the Bagnold Summer” marks the directorial debut of actor, writer and comedian Simon Bird, star of the British series and two films of “The Inbetweeners.” The press release describes the movie as “a tender, touching and acutely observed coming-of-age story, which tells of a heavy-metal-loving teenager’s holiday plans falling through at the last minute, leading to him having to spend the summer with the person who annoys him most in the world: his mum.”

All of those adjectives (excepting perhaps the “heavy-metal-loving”) fit the winsome, whimsical ways of Belle and Sebastian, but their involvement was not the work of a music placement person for the film. Murdoch describes Bird as “a proper fan,” noting that he was adamant that the band’s “Kiss Me Now I’m Dying,” originally on “If You’re Feeling Sinister,” be included. The song was re-recorded for the soundtrack, with a more dynamic approach. Also re-recorded was “I Know Where The Summer Goes,” which originally appeared on B&S’s fourth EP, “This Is Just a Modern Rock Song,” and later collected on “Push Barman To Open Old Wounds.” The new rendition is less organ-based and more piano-dominated. Both are improvements over the originals, which is saying something significant, as they were perfectly fine to begin with—but these have a fresh bounce that was missing from the languid, leisurely compositions as originally recorded.

There are a few instrumental moments, including a lovely deconstruction of the first single, “Sister Buddha,” which although it might seem an outlier, Bird chose due to his interest in Buddhism; “Jill Pole,” a sweeping, anthemic meditation with lovely harmonica inflections; and “The Colour’s Gonna Run,” which borders on Mogwai-ness. “We Were Never Glorious” is a lengthy, by comparison, instrumental conclusion but seems to have dialogue drawn from the movie, voiced by the mother’s character. Have I mentioned how lovely all this is?

Perhaps most surprising here, in addition to choosing Belle and Sebastian for this soundtrack about a metalhead’s relationship with his mother rather than Megadeth or The Mountain Goats, or, I don’t know, any other musical act, is the inclusion of “Safety Valve,” perhaps the most, uh, lovely moment of the entire enterprise. “I know there’s something out there, I can feel it,” Murdoch sings with wistful simplicity, and later “I know I’m not in a good place, I know I’ll get better.”

“That one’s ancient,” Murdoch says. “It predates the band; it’s maybe twenty-five-years old. The only time I can remember ever playing it was in a coffee shop with a friend of mine, and people scratching their heads. There was only a verse and a chorus, so I went back to it, and revised the words. It’s a simple song about being over-reliant on a particular person—probably my girlfriend at the time. But it seems to work okay here, too.”This song might be the best of this bunch, in terms of the album as a whole, and it’s a quiver full of quivering highlights.

The kind of simplicity that Murdoch references permeates Belle and Sebastian’s approach—their arrangements are never overstuffed with orchestral bells and whistles, the compositions are tastefully done. That’s especially apparent on the brief “Another Day, Another Night,” sung and penned by the sextet’s Sarah Martin (who also plays violin, recorder, stylophone, melodica, guitar and flute for the ensemble). She says the song was inspired by the mother’s character: “In the screenplay, the mum is a richer character than in the book… There’s a point when she thinks about an old boyfriend, and her whole past, with all its regrets, suddenly opens up before her. I love her character.”

The full version of “Sister Buddha,” the first single, released in July, begins with a muscular approach and a riff echoing Pulp’s “Common People,” powered by a soaring, anthemic trumpet part. While it wasn’t intended for the film originally, when Bird heard it, he knew he wanted it. Murdoch indicated that “Simon picked up on it, wanting to have something uplifting at the end of the movie, and we were happy for him to have it.”

In short, it’s amazing that the record coalesces so well, given that it is a sort of Frankenstein’s-monster exercise in assemblage. Belle and Sebastian garnered a brief mention in the record store-set “High Fidelity” movie, but will this be a moment for them like The Shins’ in “Garden State?” Quite possibly. I will just have to look, and maybe by then I will have read the book.