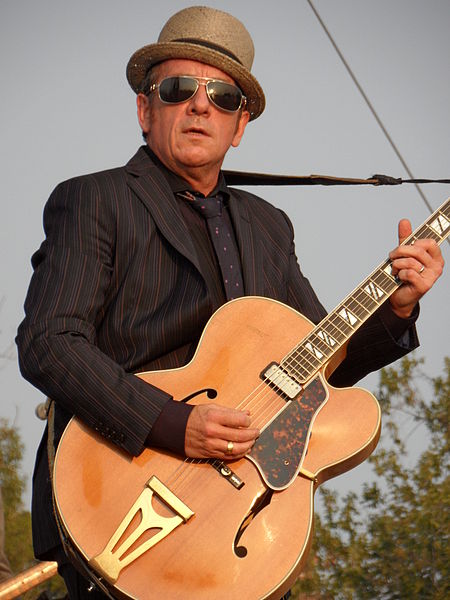 The punk movement of the late 1970s was wildly original, hugely influential, and—perhaps understandably, given its inherent nihilism—short-lived. The question ever since has been, which of punk’s surviving progenitors (those who gloriously self-extinguished taking top honors, of course) best embodies the punk legacy? When you’ve witnessed Johnny Rotten doing butter commercials and warbling Andrew Lloyd Webber, this can be a difficult call.

I’d opt for Elvis Costello, which at first might seem an odd choice, as the artist’s early albums are clearly more punk-infused than actually punk. From the start, Costello displayed the kind of sophisticated use of rhythm, chord changes and lyrics that are at odds with the stripped-down, defiant primitivism of groups like The Ramones and The Clash. But while punk’s musical raison d’être was a middle finger to prog-rock’s bloated pretension, its political spirit was its rejection of mainstream music’s cookie-cutter corporatism.

That’s where Costello comes in. There’s not another major artist who has spent as many decades openly defying the industrywide obsession with branding; Costello has repeatedly slipped away from his original angry young man (now angry old coot) act to follow his muse wherever it led him—almost certainly at a cost to his own career. It may seem odd to slap a punk label on an artist who has a catalog on Deutsche Grammophon, but that’s exactly the point. Costello gives exactly zero fucks about your expectations of him. He’s going to write and play whatever he goddamn pleases; which is just… punk.

This is an artist who, in addition to a string of highly distinctive solo albums, has released major works with two separate bands, The Attractions and The Imposters. He’s collaborated with talents as diverse as Burt Bacharach, Paul McCartney, Bill Frisell, The Roots, Allen Toussaint, Marian McPartland and the Swedish mezzo-soprano Anne Sofie von Otter. Over the course of his career, he’s issued an album of country standards (“Almost Blue”), a song cycle for string ensemble (“The Juliet Letters,” with The Brodsky Quartet), and an entire album of achingly earnest, lushly scored love ballads (“North”). He’s a marketing manager’s nightmare; ditto for the average music critic, who would just like to pin the guy down, already.

Costello’s fragmented musical identity extends to his name. He was born Declan McManus, but for a stage moniker he deliberately appropriated the most revered name in rock ‘n’ roll (a gesture of such lèse-majesté that it’s almost definitionally punk) and stuck it in front of his father’s old stage handle. In 1977, he made the name change legal; then in 1986, he changed it back to Declan McManus, and attempted to put “Elvis Costello” behind him. It didn’t take, although he still writes and publishes music under his birth name. He also flirted with a third identity, Napoleon Dynamite, but soon gave it up, possibly because it had become indelibly associated with the 2004 film of the same name (whose director, Jared Hess, had no idea it had originated with Costello until the movie was well into production).

So which Costello will we see on the stage of the Chicago Theater? There’s no way to be certain; Costello’s gigs are noted for unpredictability. (He once famously made that element of uncertainty a literal mechanism of his shows, with an enormous Wheel of Songs that would dictate, with a spin, which tune would be played next.) But given that he will be accompanied by The Imposters, and that his most recent album, 2018’s “Look Now,” was recorded with that band, it’s a fair bet that those songs will figure prominently in the November set list.

In which case, we’ll be seeing Costello in my personal favorite of his many alter egos: the wizardly pop maestro, architect of melodic, rhapsodic, stirringly urbane tunes like those on his 1982 album, “Imperial Bedroom” (still tenaciously holding onto its reputation as his masterpiece) and “Painted From Memory,” his bravura 1998 collaboration with Burt Bacharach. In fact, Bacharach shows up on “Look Now,” returning for a trio of exceptional tunes (“Don’t Look Now,” “Photographs Can Lie” and “He’s Given Me Things”). But you could be forgiven, on listening to the album cold, for not being able to pick out which are the Bacharach collaborations, because so much of that legendary songwriter’s dazzlingly complex but deceptively breezy style has rubbed off on Costello’s solo compositions—especially the insanely infectious opener, “Under Lime,” the R&B foot-stomper “Mr. & Mrs. Hush” and the gorgeously soulful “Dishonor the Stars.” There’s an air of Brill Building brilliance over the whole goddamn project.

All of which suggests that what we’ll be getting from Elvis Costello in November won’t be remotely punk. Except, of course, for the way it will be absolutely punk.