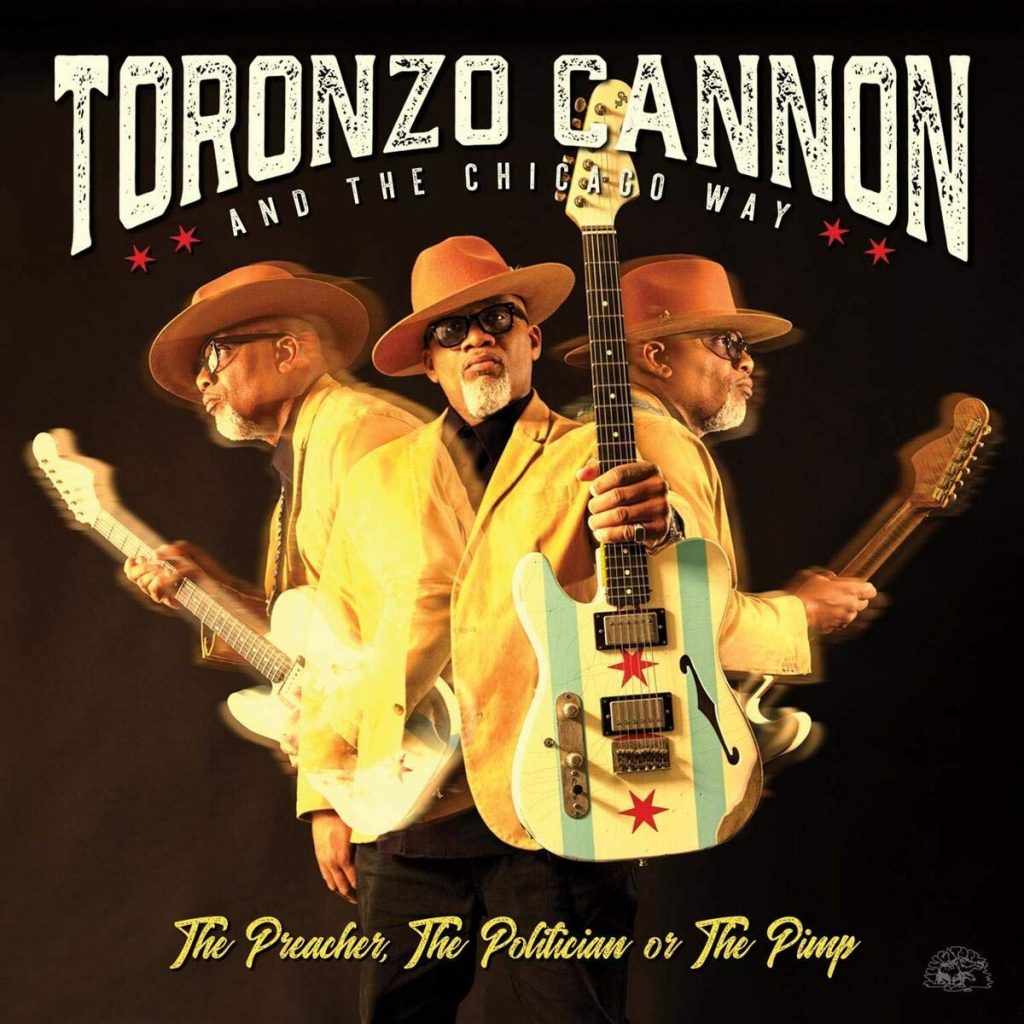 This is a cautious, nervous, tentative time in our culture, and bluesman Toronzo Cannon’s new album with The Chicago Way has arrived to power-wash the grit of doubt and dread from our collective unconscious with a blast of exhilarating self-confidence. That’s always been the paradox of the blues: by diving face-first into our deepest woes, we somehow emerge incandescent.

The album wastes no time, its first track, “Get Together or Get Apart,” opening with an organ swell that’s like sliding into home base, followed by Cannon ripping into an intro solo like he’s been warming up since last Tuesday. You might feel vertiginous, as if all the synapses in your brain were rewired, like a switchboard operated by a four-year-old.

Cannon’s wordplay often threatens to upstage both his singing, which is dazzlingly full-throttle, and his playing, which manages to be both virtuosic and wild. In “Insurance,” one of the few tunes in standard twelve-bar blues, he sings a savagely witty lament about a member of the “working poor” trying to get health coverage just to stay alive. “I read the fine print, signed on the line / I hope I got enough to keep from dyin’ / After all the questions and the third degree / It felt just like a colonoscopy.” In a spoken-word coda, he quips, “I need a CAT scan, too? All I can afford is a kitten scan.”

Another twelve-bar track, “She Loved Me (Again),” shows the enduring versatility of that form. It’s in an entirely different realm from “Insurance,” both tonally and texturally. The band punches its way into the song, like footballers taking the field by bursting through a paper hoop. The lyrics take a back seat to Cannon’s talents; he’s in sonic competition with himself. You can’t decide which has the most gorgeously evocative wail, his voice or his guitar. Both are tinged with languid despair, as if resigned to devastation and taking the time to make it resonate. It’s unrelenting, and hair-raisingly beautiful.

The album shows impressive range, from the sermonizing hand-clapper “The Silence of My Friends” to the spectral, shimmering bayou blues tune, “The First.” That range extends to the issues Cannon addresses, with keenly felt political outrage simmering just below the boil in a number of cuts, alternating with songs about sex and relationships that, in their breezy wordplay and upfront assessments of women, might have some listeners wincing at the near-sexist sideswipes. (“Give me an ordinary woman / Give me an ordinary girl / Five-foot-four from her head to the ground / Just over a hundred-and-fifty pounds / Pretty face, but missing two teeth / But babe, in the back it’s all right with me.”)

But if there’s any doubt whether Cannon is a feminist ally, he dispels it in the album’s final cut. In “I’m Not Scared,” he shows his bona fides in the only genuine way a straight man can: after a brief opening line—“These are the voices of those who refuse to be victims”—Cannon shuts the hell up and gives over his song to other voices, rousingly sung by Lynne Jordan, Cedric Chaney and Maria Luz Carball, which testify to repression, exploitation and abuse. “I’m not scared of a little heartache / I’m not scared of a little pain,” they proclaim; “I’m not scared of what you put me through / I’m gonna live my truth.”

Cannon doesn’t remain entirely silent; his searing guitar is a blistering Greek chorus. It’s a moving closer to an album that roves widely over the breadth of the human experience. This is a record for the present moment; but like all great blues, it will always be that, whether you listen to it next month, or next year, or half a century on. That’s the glory of the blues… and why they call it the blues.

“The Preacher, the Politician or the Pimp” is available from the usual outlets, including Toronzo Cannon’s website.