When someday—assuming that we make it to “someday” on this fraying, ecologically devastated Earth—someone makes a movie about our time, what bands will be best suited for its soundtrack?

We think the post-apocalyptic acid punk of Tropical Fuck Storm is a must-include on any decent list.

In their active engagement with political currents—including the destructive force of late capitalism, the imperialistic reaches of the United States and an ever-emergent China, and these oh-so-environmentally disastrous times—Tropical Fuck Storm is a band that is as timely as we could wish they weren’t. They aren’t believers in past, present or future. They aren’t believers, period. There’s little respite in the worlds their songs portray, just the desperate dignity of truth-telling.

This indie Aussie supergroup is the brainchild of Gareth Liddiard and Fiona Kitschin, key members of the post-punk acid blues band that was the Drones. In Australia, that description would require no gloss. The Drones were at the cutting edge of the country’s indie rock scene during the aughts and early part of the present decade. Their sound was raw but often languorous, steeped in distorted jams, mining the hurts of Australian history to devastating effect.

When the band went on hiatus in 2016, it was a loss for Australia and anyone else in the global musical audience who had the good sense to be paying attention. Sensing the opportunity for a next chapter, Liddiard and Kitschin decided to take their already out-there instincts farther into the avant-garde, enlisting singer-guitarist Erica Dunn of Harmony and drummer Lauren Hummel of High Tension to form Tropical Fuck Storm. In a Vice interview Dunn would recall the pitch she got by phone from Liddiard and Kitschin: “Do you want to play guitar? We’re just going to do some weird shit.”

Mission accomplished, the band hit the road in 2017 and released their debut record, “A Laughing Death in Meatspace,” in 2018, easily one of the finest albums of last year.

One of the qualities that sets Tropical Fuck Storm apart from their peers and often formidable influences, such as Captain Beefheart, Birthday Party-era Nick Cave and even early Talking Heads, is their commitment to building songs on the weirdest possible beats. It’s not so much a feature as a foundational premise of the band. The challenge, as Liddiard described it in an interview, was at all costs to “Get away from four on the floor, classic John Bonham.” The songs on “A Laughing Death in Meatspace” defy rhythm, tear it down, and then find it anew elsewhere. They’re groovy in a way that catches the blues by surprise and shifts it to an alternate, heretofore-unheard tempo that picks up and winds down at will. 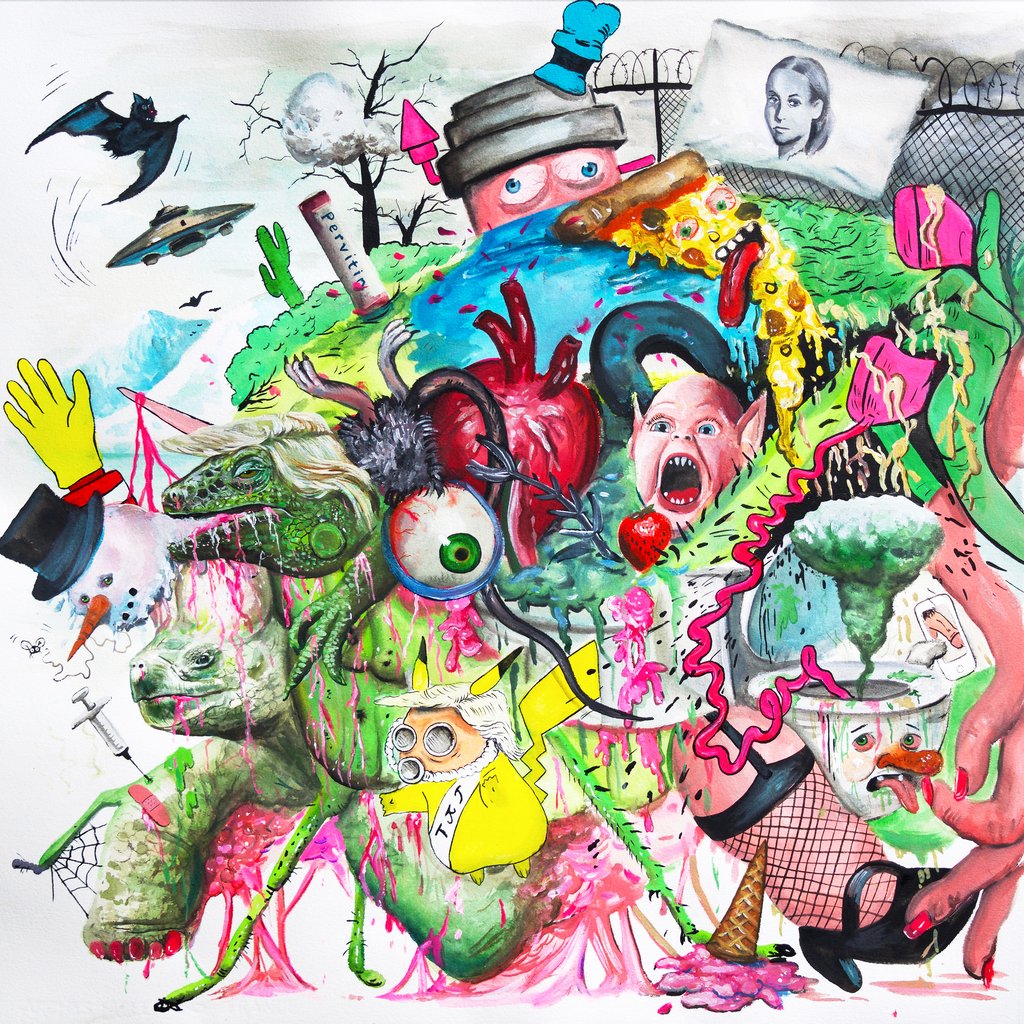 In “Braindrops,” the band’s 2019 release, there are fresh signs of the restlessness that brought Tropical Fuck Storm into existence. Putting the funk back into their fuck, Liddiard and company have deliberately upped the tempo, singing sly of the beats, crafting a record that is almost alt-hit worthy (which is clearly not a band goal).

The title track issues the album’s clearest thematic statement. Its jittery, danceable-if-you’re-high, hip-hop blues layers Liddiard’s vocals over off-kilter, minor-key notes. “Braindrops” can feel ethereal, thanks to the sweetly bombing B-52s-styled harmonies of Dunn and Kitschin. Liddiard could be angsting on an everyday hangover when he sings “Get Up. Get Up Now!” But clearly his perspective is darker and larger, as he riffs on a tram driver working for “shit wages,” soccer mommies buying beauty on credit, and “cam girls” who fake desire for men they’ll never see, and likely wouldn’t want to.

The drifting, ironic nostalgia of the soprano harmonies—“I remember a time when life was simple like a glass of water”—are juxtaposed against the sad fate of seeing ourselves through crystal clear bathroom mirrors, as though lost in some endless funhouse of Baudrillard’s imagining. The French theorist promised us an era of simulacra and the states of blurred reality and unreality inseparable from the designs of late capitalism. It’s the simplification of the world into endlessly outsourced commercialism, a place both digital and literal where to have is to be. We want the real thing, the Ray-Bans, the newest iPhone, but once we know it’s all a game, we might as well settle for the knock-offs. “How far you are from knowing your own heart?” Liddiard sings, as he envisions with Baudrillardian clarity a long future of searching for an authenticity that is perishing inside our nostalgic longing for it.

Throughout “Braindrops,” Tropical Fuck Storm often takes on the role of hidden camera, recording the most damning aspects of our culture and playing them back to us in brutally honest songs. “Who’s My Eugene” is inspired by Beach Boy Brian Wilson’s controversial psychotherapist Eugene Landy, who played a key role in destroying Wilson’s will to live and capacity to create. The song might begin as a fly on the therapist’s wall. But the sad story of Wilson at its center is also a question about what kinds of influence we’ve all given ourselves to. As Dunn takes the vocal lead, with Kitschin’s blending backup, their voices come together in an almost childlike plea, one part ominous, one part escapist. In the era of CCTV, drones and omnipresent technology that we embrace with little critical reflection, the question asked is who, exactly, is controlling you?

“The Planet of Straw Men,” with its nod to Bob Marley, is funkier and more full-on fun than any other track on the record. The ear-pleasing sound notwithstanding, the planet being sung about is heading toward virtual ruin, occupied by a citizenry addicted to online antagonism (“Their only purpose is to disagree/ And do it publicly”) and enamored of celebrities whose twitter feeds fuel illusions of intimacy (“They think they’re gonna fuck a movie star”). Liddiard’s lyrics make it clear, however, that our digital devices are “radiating more of a loneliness than a visible light.” In other words, we’re drawn to that which also reflects some inner lack in us.

And because one fucked-up world isn’t enough, Tropical Fuck Storm even goes sci-fi on us. The interconnected acoustic tracks “Maria 62” and “Maria 63” riff on the legend of occult medium Maria Orsic, whose 1930s visions of superior Aryan beings were said to have won her the favor of Hitler, and other times thought to have cost her her life at the hands of the Nazis. The song imagines a Maria who fled to Argentina, as many Nazis did after the war, only to be tracked down by a Mossad agent obsessed with his prey and enchanted by what he wishes to bring to an end. “Maria 62” opens with lyrics as lovely as any you’ll find in the band’s body of work: “It’s 3am, the wind is weak and warm/ A seagull swoops, the moon anchored offshore/ You’re like a dream in which I have not slept for weeks/ And I’ve been sending a search party after every word you speak.” But this is not a love story, and Marie’s allure is a metaphor for the seemingly timeless appeal of fascism, which rises, falls, and rises again, even in our times. Liddiard is taking his satiric stabs, to be sure, but he’s also riding out a dystopian fantasy that would be stupid if today’s neo-Nazis and fascism-inclined idiots didn’t keep falling for dangerous and sick ideas.

In the end, what makes Tropical Fuck Storm as vital as they are unsettling is how well their songs, which often seem chaotic, fractured, and as brutal as the subjects they consider, speak to the currents of our contemporary worry. They’re making a strange sort of musical magic, to be sure. But they’re also demanding that we confront a world where change isn’t necessarily gonna come.