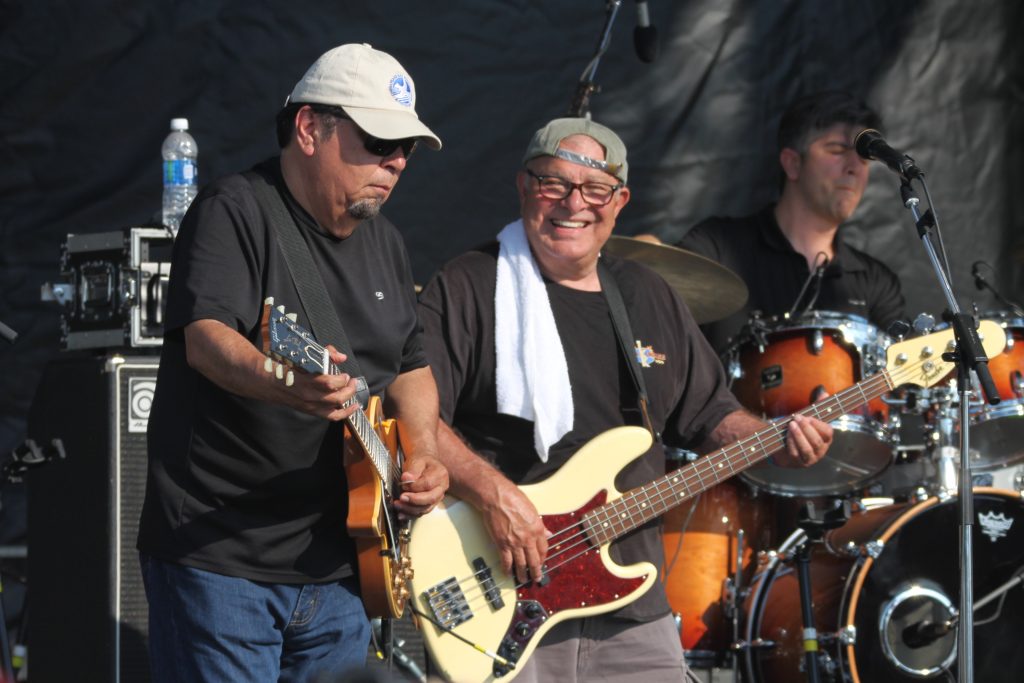 Los Lobos has been doing December shows at City Winery “about as long as there has been a City Winery,” notes band saxophonist, keyboardist and co-producer Steve Berlin, who joined the legendary Mexican-American band in 1983. In fact, the three Los Lobos shows December 8 through 10 will be the eighth annual end-of-year band appearances at the venue.

“Chicago is really—and I don’t say this lightly—our second home. I mean it, it’s like our favorite place to play, it’s our best market, every show is like a family reunion there. We’re never not looking forward to coming back to Chicago. The city has always been incredibly welcoming and gracious and treats us as if we were one of their own. Generations of Chicagoans have grown up with our music in a way that’s kind of unlike any other city in America, I have to say. And it’s become multigenerational. I can’t think of any other city in America where we have the undying and true love that we’ve gotten from Chicago.”

And yet despite nearly a decade of Los Lobos doing annual pre-Christmas December shows not only in Chicago but across the country, the one thing missing? Oddly enough, Christmas music.

“Performing Christmas music and doing a Christmas album was something we had been talking about as a band for many, many years. But we needed some extra help. And clearly with all these Christmas shows, it’s really something we should have been thinking about when we started doing them all. But generally, by that time of the year, no one is in the mood to write or rehearse or any of the other stuff. So, it was the right time, the right place, the right everything to make it happen this time, as opposed to all the other times.

“A lot of times it takes someone outside of the band to make things happen. Somebody comes to us with an offer, or in this case, a label actually put all the pieces together. So that was the impetus. We talked about it, but it was never going to happen unless somebody else said, ‘Here’s a budget, go do it.’ That’s not that unusual. We’re not exactly, I wouldn’t call us entrepreneurial. Put it that way.”

Rhino Records approached Los Lobos in May, but as Berlin notes, “they were originally thinking of a record for Christmas of next year. But then everything came together quickly. It was kind of said in passing, ‘Hey, if you guys could pull this off by the middle of July, we can get it out this year.’ And it just so happened that we had enough of a window in our early summer schedule to pull it off, so we went directly to work.

“We have a couple of friends who are collectors of Latin Christmas music, so I reached out to them immediately and said, ‘Look, we have an all-hands-on-deck situation here, send me everything you’ve got.’ We had 150 songs to pick from a week later and then we weeded through and came up with some ideas. And then those ideas begat other ideas, which begat other ideas.

“Among the interesting things that we discovered was that there’s a zillion Puerto Rican Christmas songs. Every salsa band there ever was has at least one—and sometimes more than one—Christmas record. And oddly enough, in the Mexican tradition, there’s really not that much by comparison. We obviously did choose a couple, but there were a million Puerto Rican songs to pick from and way less than a million Mexican Christmas songs, or Colombian and Christmas songs from other parts of Latin America. So that was kind of interesting.”

“Usually stuff in Lobo world takes way longer than it should. And this album, for whatever reason, went way faster than it had any reason to, ridiculously fast: from offer to finished record it was two-and-a-half months. The actual time in the studio was probably not even three weeks.”

The location of the studio where “Llegó Navidad” was recorded was in the last place a band that began life in East L.A. would likely have expected: East L.A. 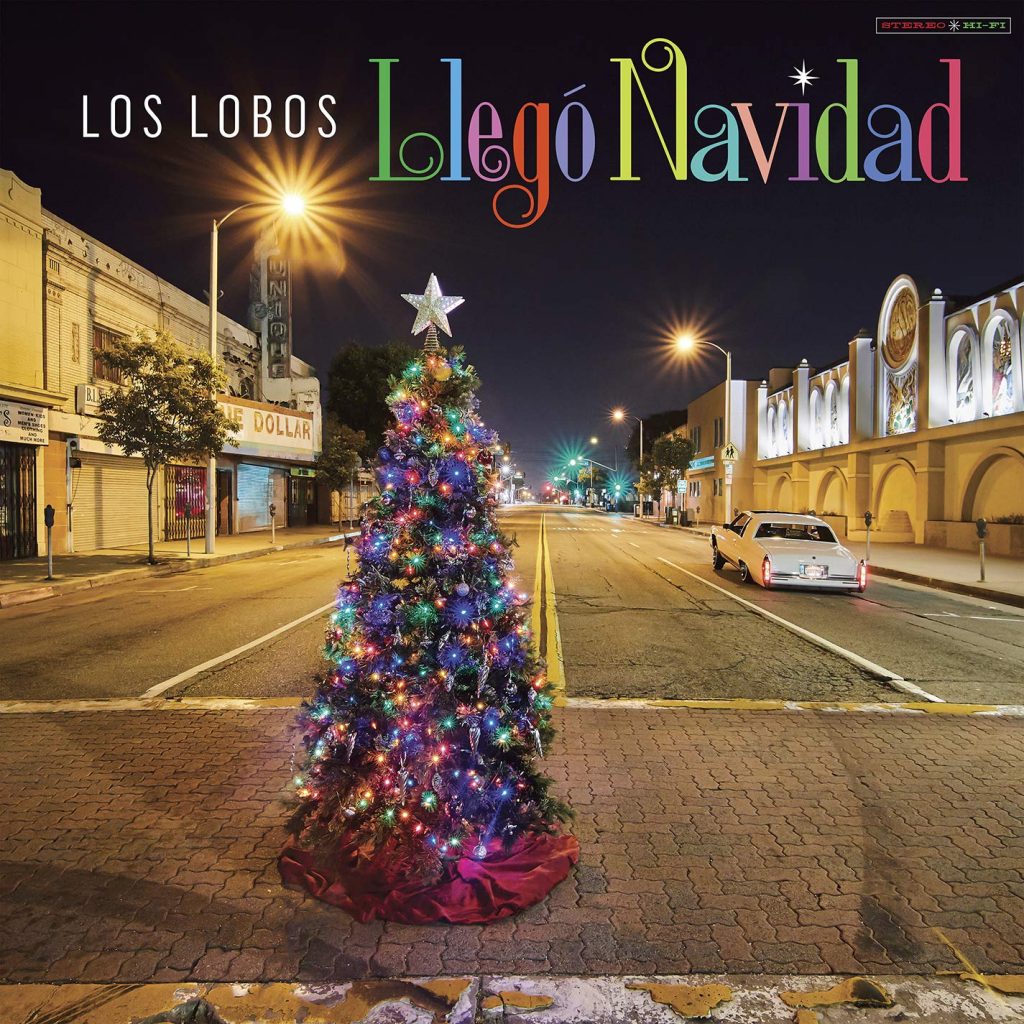 “That was actually a big part of what made it so easy. We found a studio two blocks from where the guys grew up. It’s actually the cover of the record, which is a picture of a Christmas tree right on First Avenue in downtown East L.A. And the studio was the corner, literally the traffic light that you see right on that corner. Every day would start with an hour of stories about something or somebody that happened, ‘Hey, remember that time when…’ So, the whole vibe was pretty warm and fuzzy. It brought back a lot of memories every day just going to work there. It was pretty cool.”

While the rest of Los Lobos grew up with the Christmas traditions of East L.A., Berlin grew up in Philadelphia. “We were Jewish, so there was no Christmas at all when I was growing up. In fact, we said the next album we do is going to be called ‘Llegó Hanukkah.’”

“My wife is not Jewish, so we celebrate both. Hanukkah takes eight days, there is a Christmas tree in my house, there’s always a Christmas tree in my house. Our kids grew up with both traditions and we’re comfortable with that. I can only imagine that there are a lot of households that are very similar to ours where both are celebrated. We enjoy it, it’s a fun time of the year.”

Was there ever the thought to do standard Christmas music? “You mean like chestnut-type stuff? Our version of that was there was a lot of internal discussion as to whether or not we should bother with ‘Feliz Navidad.’ But you know, we do a song called ‘La Bamba’ that makes everybody happy. So it’s not like we’re trying to do some intellectual indie-rock version of a Christmas record. We weren’t uncomfortable. We feel there is a good mix of the traditional and the nontraditional and that’s all we seek generally.”

From the beginning of the project, Los Lobos made clear that there would not be any originals on the album. “But then as we got toward the end, Dave [Hidalgo] and Louie [Perez] put their heads together and thought, ‘Why not? Let’s see if we can write one because it’s kind of a neat trick to come up with a Christmas song.’ So they came up with ‘Christmas and You,’ which is one of my favorite songs on the record.

“The original arrived very late, that was like the very, very last thing we did. But that’s also a time-honored tradition for us: usually the last song for the record is one of the best songs of the record. ‘Good Morning Aztlán’ was the very last song [for the 2002 album of the same name], we were done and ‘Well, maybe one more song.’ And then that. I don’t know. For some reason, we always wait until the end to get the good stuff. But, you know, there we are.”

As for what those who attend the Los Lobos shows at City Winery can expect, Berlin says, “Obviously we’re going to be focused on this Christmas album, but we try to touch on every era, every record, in one way or another. We don’t do a set list anymore so I can’t tell you exactly what we’re going to do, but generally we try to go to part of everywhere we’ve been.”