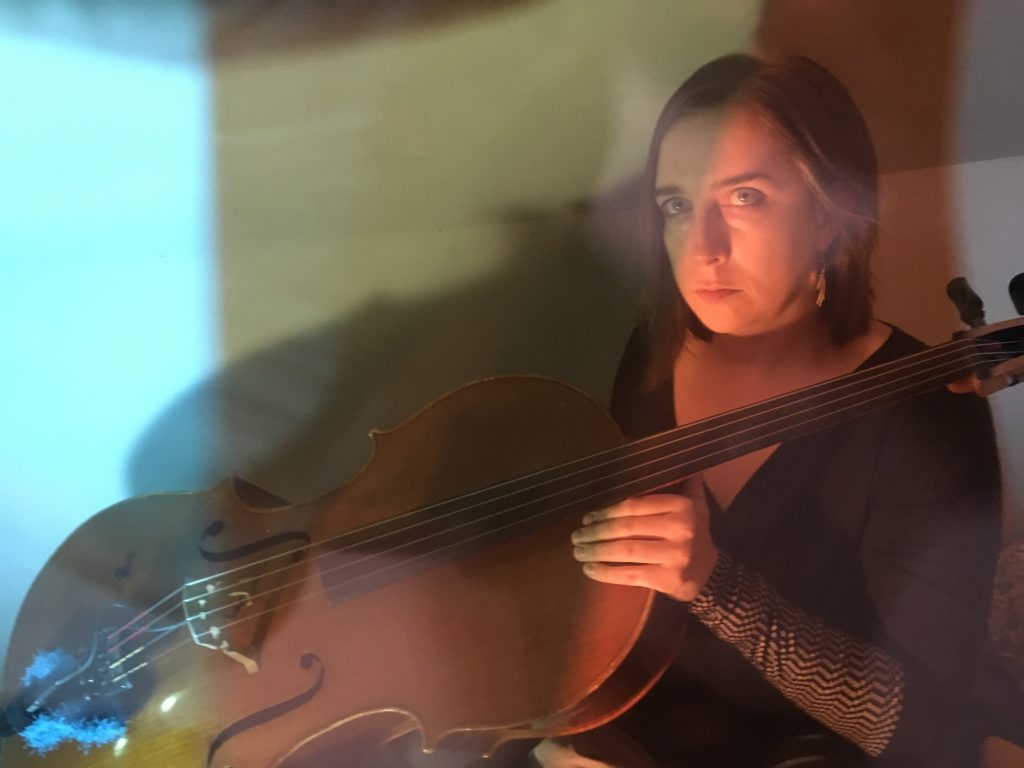 “The cello’s octave range, and the endless squeaks, hisses and bellows it’s capable of, have kept me fascinated with the instrument since the age of ten,” says Chicago-based musician Nora Barton.

She’ll be masterfully manipulating all of those traits this week, when she celebrates the release of a new solo recording, “Around the Bend,” with violinist and original Poi Dog Pondering member Susan Voelz also performing.

Barton recorded the album under the alias Planchette—a term which usually references the heart-shaped tool used in séances. In this case, it is a woozy display of cello-rooted instrumental work with spoken-word samples and found sounds woven into a bed of melodic and repetitive textures. It’s a heady, introspective work, to be sure. And, true to its namesake, this Planchette is also one which pulls its audience toward both disarming and disrupting emotions, often found lurking beneath a seemingly placid surface.

For Barton, who frequently contributes her work to Windy City recording studio sessions and organizes public chamber-music performances on behalf of the Chicago chapter of Classical Revolution, Planchette presents an opportunity to let her cello take center stage.

“In chamber and orchestral music,” she says, “the cellist often takes on the supportive role within the ensemble,” a reference to the strong bass lines, accompanying rhythms and harmonies the instrument is often relegated to. “If they’re lucky, listeners may hear a soaring solo line before dropping back to the depths.”

But times are changing. “Cello seems to have become one of the leading all-purpose instruments these days,” says Barton, “utilized in anything from experimental new compositions to fronting a rock band.”

She should know; Barton is right there on the frontlines, lending her playing to indie rock and orchestral groups alike. It’s all been part of an unexpected and winding journey, leading her to the release of Planchette’s debut.

“After conservatory, I began to realize my career as a working musician was not leading me down the path of an orchestral performer,” she says. “I started picking up recording session gigs, sitting in with rock bands, and working with new music ensembles.” She began performing with groups like Abbey Bowed, Manual Cinema, Mucca Pazza and the especially curious mbira-based trio ExtraOcular.

What’s more, there’s her ongoing work with the aforementioned Classical Revolution. “Hours of phone calls and emails, program planning and musician swapping, culminating in a chamber music jam at the neighborhood dive bar as our reward,” she says. “But it’s exciting to know I can program any kind of chamber music and have a place to play with anxious patrons ready to listen.”

The emotional response to those dive-bar and street-corner concerts began to meld with the critical and peer acclaim she was collecting in indie rock settings. From that rich brew, Planchette was born—and Barton soon realized it was going to be “a chameleon force.”

“I grew more comfortable improvising and working with effects pedals,” she says, looking back on her early experience collaborating with rock outfits. Then involvement with ensembles like a.pe.ri.od.ic and NbN Trio gave her confidence with extended performance techniques, and further freedoms of experimental improvisation.

Chalk it up to an innate knack for instinctively making the right calls, with cello in hand. “I’ve actually been performing [in the style of Planchette] for a few years,” she eventually realized, “but only recently put a name to it.”

Barton decided to capture some of that more adventurous solo work on tape; and when it came time to hit the studio, Barton left plenty of room for inspiration to guide her Planchette.

“The session was almost entirely improvised, save for a couple of loops I had been keeping in my pedal’s bank for the right time,” she says, of utilizing pre-recorded and stored soundbites. “But I hadn’t really used effects for recording sessions before,” she admits. Now, a cluster of tone-tweaking pedals find their way into the fray.

The music is also influenced, in part, by surroundings and space itself. Barton says that acoustics and room layout affect not only the paths of the sound waves she creates, but how she attacks and coaxes her instrument as well. With that in mind, the performance to celebrate the Planchette CD release should prove to be another one-of-a-kind, otherworldly experience.

“Often I’ll start playing blindly, and then listen to the response of the reverberations off the walls,” she says. “I’ve had performances when that first fifteen seconds of concentrated listening inspires a full-length soundscape.”

Bill Furbee is a freelance journalist whose work has appeared in Cincinnati CityBeat, Detroit Metro Times, No Depression, Ghettoblaster, American Libraries magazine and other publications. He’s also a frequent contributor to Ripley’s Believe It or Not! and a board member of the Cincinnati Music Heritage Foundation, and enjoys repairing pinball machines in his time off.