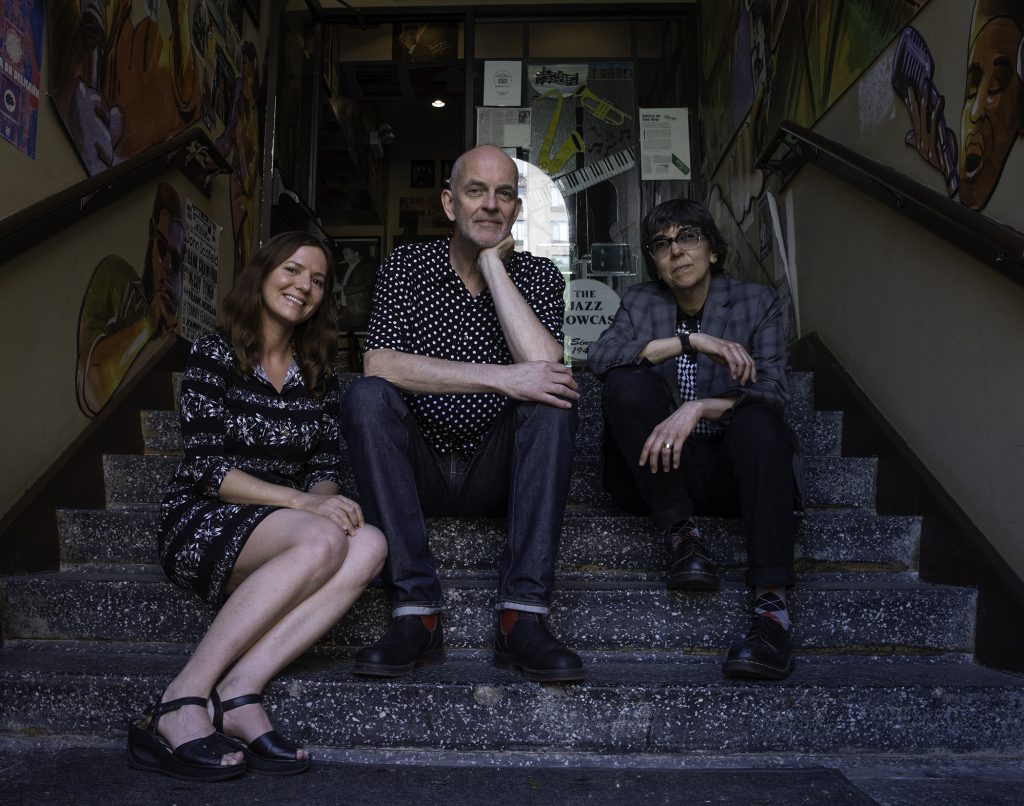 45
Sunshine Boys
Don’t call them a supergroup. They’d rather think of themselves more modestly, as three musicians with the good fortune to find each other. Local institutions Dag Juhlin (The Slugs, Poi Dog Pondering, Expo 76) on lead vocals and guitar, Freda Love Smith (Blake Babies, Antenna, Mysteries of Life) on drums and backing vocals and Jacqueline Schimmel (Big Hello, Justin Roberts) on bass and backing vocals this spring released their second full-length, “Work and Love,” a masterpiece reminiscent of REM’s jangliest moments. Like its predecessor, 2018’s debut “Blue Music,” “Work and Love” was engineered by Matt Allison (known for his work with Alkaline Trio, Smoking Popes and The Webstirs). Juhlin says “the biggest motivation for me is the sound the three of us make together and how easily we all work together. I want to keep writing for us if only to keep this sound alive. This sound keeps me going.”

44
Tree
Since dropping “We Grown Now” in April 2019, Tree (born Tremaine Johnson) traveled the world, focusing on becoming a better person. In February he released “The Blue Tape,” his latest in what he calls “soul trap,” his own hip-hop niche. Tree’s raps are drawn from a hardscrabble Cabrini-Green upbringing. He has no patience with rappers bragging about fame and money. “I’m a hero to two kids in particular,” he says of his sons, six and twelve, and that’s enough for him. “When you don’t have to worry about making money from making music, you find peace in small things [like] walks down the beach, boat rides, fishing… That’s more exciting than putting out albums.” Tree clarifies that he’s not abandoning music, he may even start a label. “But as far as the whole rat race, nah, I’m more novelty rapper at this point. I’m a collector’s item.”

43
Ratboys
The rock quartet released its third record, “Printer’s Devil,” in late February and played two sold-out shows at Lincoln Hall and The Hideout—”A really awesome weekend for us,” says singer-songwriter Julia Steiner. A subsequent tour planned around South By Southwest was canceled, but the band is still determined to tour the album “when it’s safe to do so. We won’t put out another record until we’ve gotten a chance to properly promote this one.” The band is demoing new songs, but “we’re in no rush to book studio time, especially given the uncertainty of the future and the fact that we can’t get the full band [also including guitarist Dave Sagan, bassist Sean Neumann and drummer Marcus Nuccio] back together until stay-at-home orders are over.” In the meantime, Ratboys have launched a weekly video show via Twitch, called “Virtual Tour,” in which they “play songs, do Q&A, have lots of segments. It’s really fun and keeps us creative and gives us something to work on.”

42
FACS
The post-punk band released “Void Moments” in March, their third full-length since the band formed three years ago, after Disappears lived up to their name. Guitarist Brian Case, whose impressive pedigree already included Ponys and 90 Day Men, formed FACS with Disappears drummer Noah Leger, adding bassist Alianna Kalaba for the 2018 “Lifelike” album. While “Void Moments” provides a fantastic soundtrack to the claustrophobia under stay-at-home orders, from a practical perspective, the record’s release was ill-timed. As Case puts it, after releasing the record they promptly cancelled all tour dates and they are “in the very early stages of rescheduling for 2021.” He says FACS are “trying to use this time to pass new ideas around and get ready to record some new music that will potentially be ready for 2021. We’re looking forward to making new music together ASAP and, we hope, getting to play at least a few shows before the year is out.” 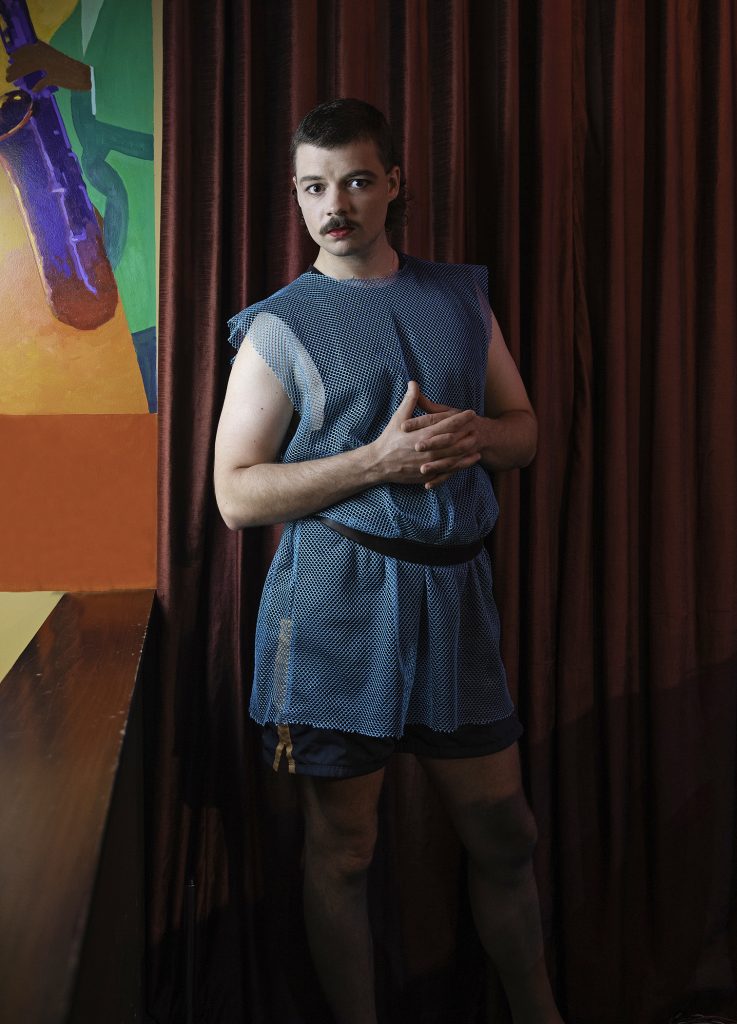 41
The Hecks
Formed in 2012 as a duo by Andy Mosiman and Zach Hebert, The Hecks recruited guitarist Dave Vettraino to join in 2017 after he engineered their self-titled 2016 debut. The group rearranged and rerecorded material from 2017 to reflect the contributions of their newest member, keyboardist Jeff Graupner, and their sophomore full-length “My Star” was released at the end of 2019. Their bio dubs the group “a splash of neon against an otherwise drab scene,” a reflection of their sound that echoes eighties synthpop. The Hecks were excited to “bring our message to more ears across the planet,” but haven’t toured due to the pandemic. Sheltering separately, they’re working on new material, and say that “the frenzied outpouring of foaming-at-the-mouth demos and sketches” clogging up their group texts provides hope for The Hecks. They say, “It sounds like THE FUTURE.”

40
ShowYouSuck
Show (born Clinton Sandifer) has been known of late as the rapper in Air Credits, the trio he formed with The Hood Internet, but he’s also a gifted hip-hop artist in his own right. He hoped to drop a full-length album by the end of 2020, but the pandemic and a cancelled tour forced him to rethink that goal, and for now he’s focusing on releasing four- or five-song EPs via his Bandcamp page, most recently “I went into quarantine and all i got was this damn $wag VOL.1.” The demos and home recordings underscore an ongoing obsession with pop culture, but Show is moving toward a narrative that conveys his personal story. He’s started doing comedy, and as a member of the improv troupe Fly Clap has performed at local venues such as Laugh Factory and Second City. A new Air Credits record is scheduled for a release “fall-ish,” Show promises.

39
Serengeti
Is David Cohn (a.k.a. Serengeti) the Andy Kaufman of hip-hop? If Cohn’s talent wasn’t so clear from his dexterous rhymes and ingenious wordplay, not to mention the skilled paintings of his soundscapes, the average listener and even some hip-hop aficionados would have to wonder if they were being punked. But his bona fides are legit: Cohn grew up splitting time between Chicago’s South Side and the suburbs following his parents’ divorce when he was five, started listening to hip-hop at twelve, began penning rhymes at Morgan Park High, and attended SIU in Carbondale where he met Open Mike Eagle. (Since then he’s collaborated with Polyphonic, Yoni Wolf, Advance Base, Tobacco, Son Lux and Sufjan Stevens). Serengeti’s made over thirty albums since 2003, most recently the self-released “Ajai,” which may be his finest work, recorded “right when this started from the pad,” he says, referring to the pandemic. 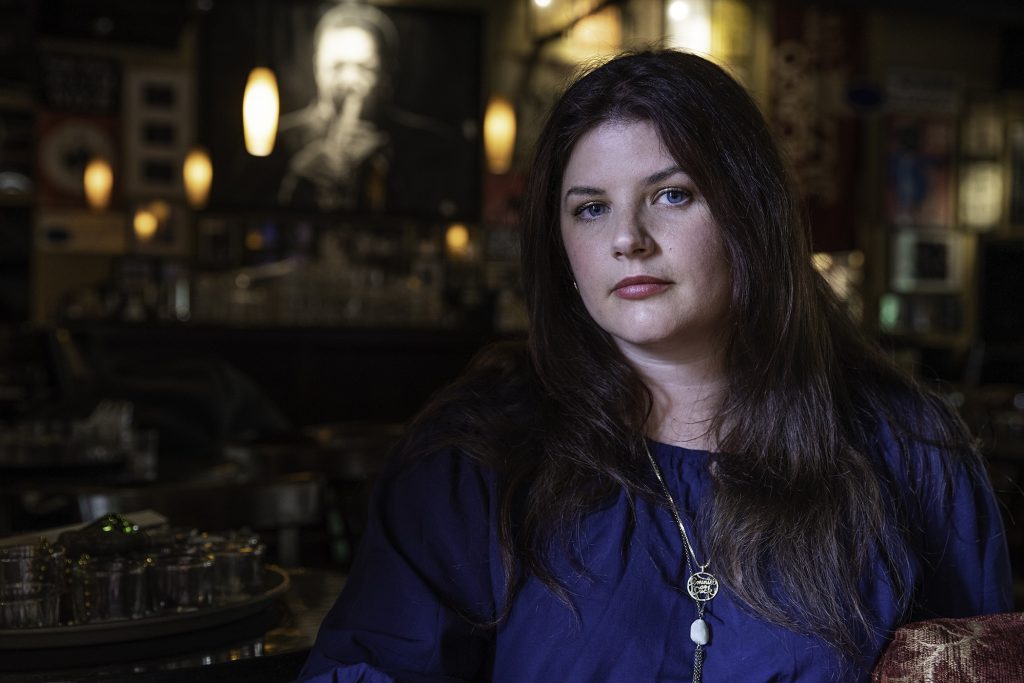 38
Danielle Sines
Singer-songwriter Danielle Sines has seen her summery pop-punk trio, Impulsive Hearts, grow from a side project to a band in demand. Its new album, “Cry All the Time,” dropped in March to jubilant reviews. But Sines’ influence on the community goes further. CHIRP Radio’s Shawn Campbell attests that Sines is “a highly visible activist for women and girls in the Chicago music scene, teaching with Girls Rock! Chicago, active with Resilience (formerly Rape Victim Advocates) and generally providing a powerful voice in Chicago for women, girls, and non-binary folx in independent music. She’s also taken the lead on projects to bring people together online during the pandemic, headlining a Midwest Action live-at-home showcase and doing virtual GR!C workshops. Her day job as a marriage and family therapist informs the work she does in the music world.” Sines says she “will also be releasing my first song called ‘Dearie’ as a solo artist on a ‘Cavity Search 2020’ compilation coming out this summer.” 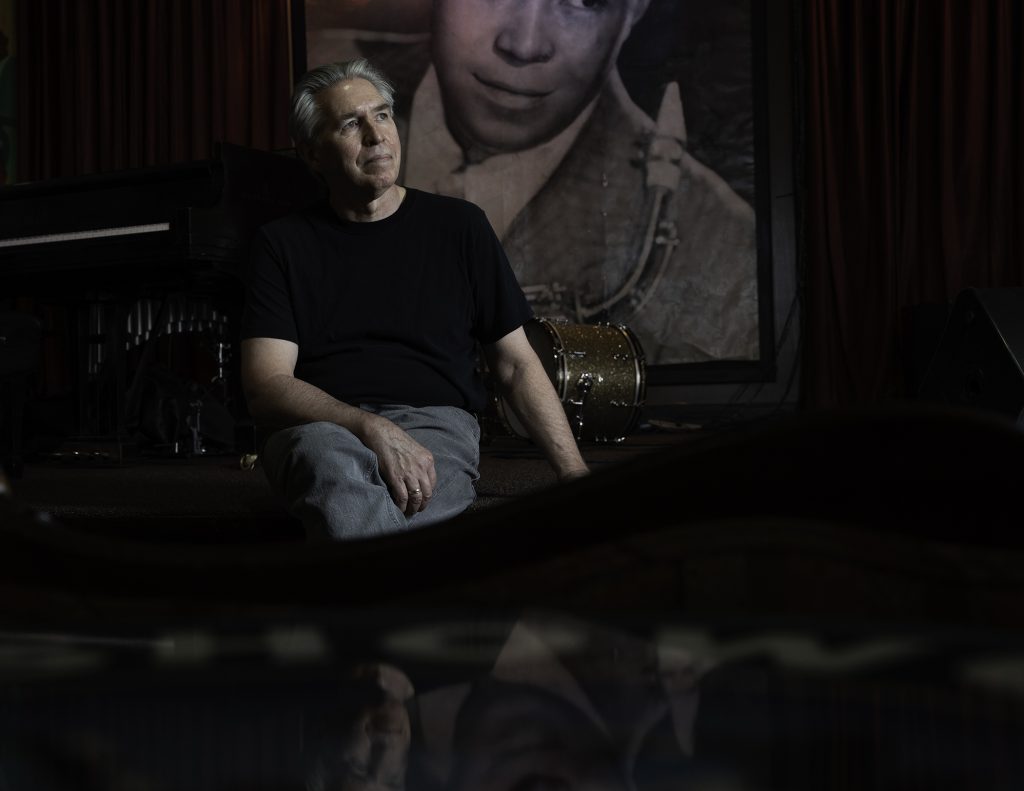 37
Michael J. Miles
Banjo virtuoso Michael J. Miles has long been a folk music fixture, with a bounty of recordings in his catalog and a repertoire of stage shows, including “From Senegal to Seeger: Stories of the American Banjo.” His latest work, funded by three consecutive years of DCASE grants, is “Mississippi River Suite,” a twenty-two-minute performance poem for banjo, flute, bass percussion and voice that takes “the river that ‘divides the nation’ as the foundation for a musical portrait of a ‘divided nation.’” Miles says, “I don’t think of myself as a singer-songwriter. I think of myself as a composer and instrumentalist.” The spoken-word element of the piece is performed by storyteller Zahra Glenda Baker. A CD of the suite was released in May, with a livestreamed CD release concert at Old Town School scheduled for July 10. Miles is also committed to posting a video each week during quarantine to his YouTube channel. 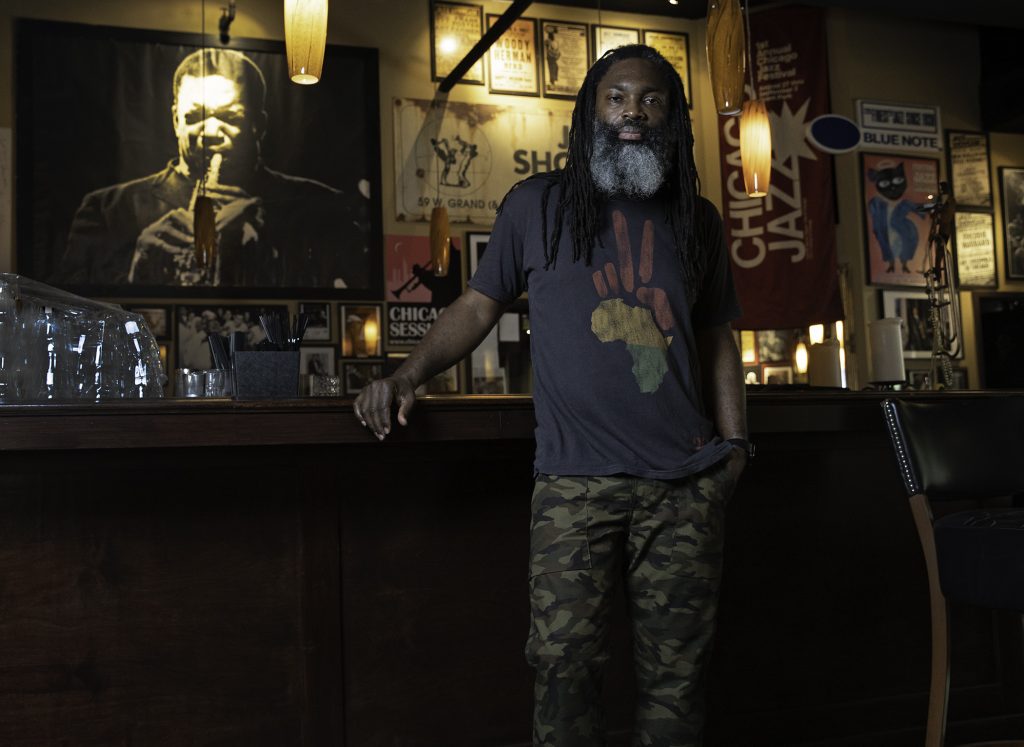 36
Dana Hall
Dana Hall is possibly the town’s most indefatigable drummer. Kate Dumbleton calls him “one of the most talented musicians in Chicago” and observes that he’s played “more or less seven nights a week all across Chicago (Green Mill, Jazz Showcase, Elastic Arts, Constellation, Hungry Brain and Winter’s).” He’s also a pivotal figure in any number of ongoing collaborations, from Clark Sommers’ Ba(SH) to Damon Locks’ Black Monument Ensemble. He’s recorded an album of original music with a pan-African, pan-Caribbean flavor, uniting his ensemble dana hall spring with expanded woodwinds, horns and percussion. Called “for all seasons,” it’s due in October. Hall, who was touring, teaching and traveling nonstop (including an October residency in Portugal), intended to use the spring months to decompress. “I didn’t count on it being mandated,” he says with a laugh. He’s been using lockdown to write, reflect and revive a solo project he’s long meant to get back to.