15
Sons of the Never Wrong
The much-loved folk trio spent most of the last two years gigging at home and touring at large, and while the pandemic put a stop to that, it’s given them the time to work on a new album, their first since 2017’s “Song of Sons.” They’ve had to work through technical challenges, since Sue Demel—unlike her Chicago-based colleagues Deborah Lader and Bruce Roper—has been sheltering in place in the Upper Peninsula. But the trio is making a virtue of the remote collaboration. “Some of [the album] was recorded in Sue’s northern Michigan cabin in the woods,” says Lader. “If you listen closely, you can hear her dogs barking and the squirrel kicking all the birds out of the feeder.”

14
Saba
Since we last profiled Tahj Malik Chandler, his “sabiquity” has remained his chief attribute. While he hasn’t released a full-length since 2018’s “Care for Me,” inspired by the stabbing death of his cousin John Walt, he’s been active in the Pivot Gang collective, which dropped its debut record in 2019. In addition to the Gang’s core members (including Squeak, Dam Dam, Frsh Waters, daedae and Daoud), “You Can’t Sit With Us” features quality turns from Benjamin Earl Turner, Femdot, Jean Deaux, Kari Faux, Mick Jenkins, Smino and Sylvan LaCue. Meantime, Saba remains an in-demand guest on fellow artist’s releases, making high-profile appearances on tracks by Jamila Woods, Bas, Smino, The Hics and others.

13
Nathalie Joachim
Haitian-American flutist-composer-vocalist Nathalie Joachim, a former member of Eighth Blackbird, scored big with her debut project, “Fanm d’Ayiti” (Women of Haiti), which she recorded with Chicago’s Spektral Quartet and which earned a 2020 Grammy nomination for best world music album. This success—combined with a bounty of commissions and performances—has inspired the Brooklyn-born artist to put down roots. She’s lived in Chicago since 2015, but has just bought a place, and in the words of her former Blackbird colleague Nick Photinos, is “poised to stay.” 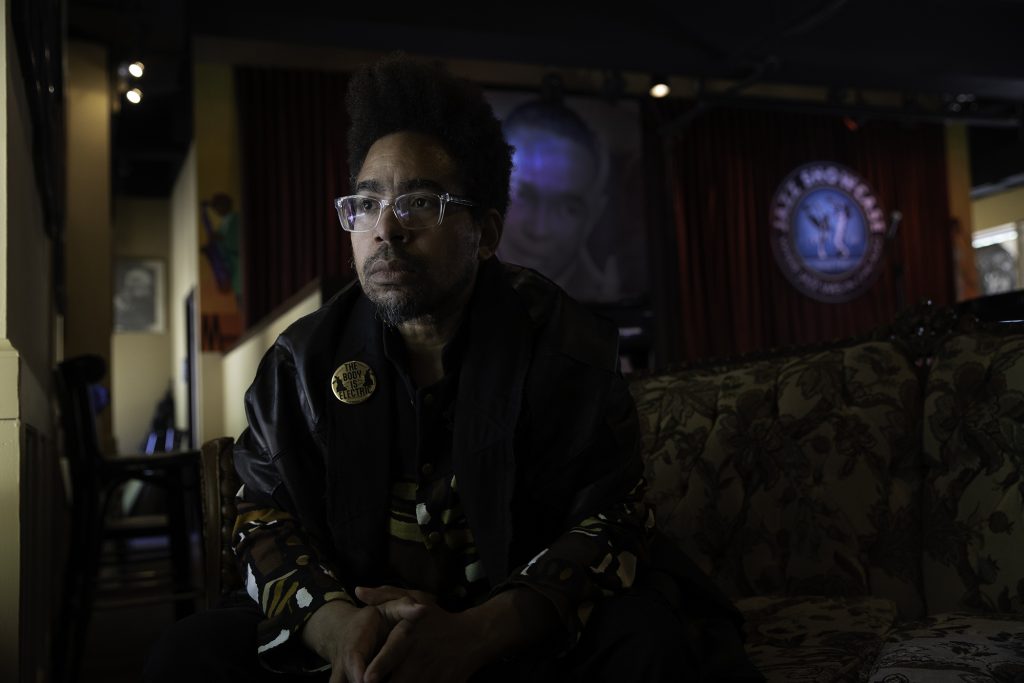 12
Damon Locks
Multidisciplinarian Damon Locks—musician, vocalist, sound artist and visual artist—is best known as the helmsman of Black Monument Ensemble. “Gospel as the soundtrack for the Civil Rights Movement was the primary inspiration” for BME, Locks says. “The Freedom Singers were a jumping-off point but groups like Voices of East Harlem, Eddie Gale’s Black Rhythm Happening and the Archie Shepp record, ‘Attica Blues’ also lend inspiration, as well as tons of others too numerous to mention.” The group has performed at MCA, Garfield Park Conservatory and the Chicago Cultural Center. Its debut album, “Where Future Unfolds,” was released on International Anthem in 2019. A single, “Stay Beautiful,” that was cut from the album for time was released this year. “I was very sad to not include it,” Locks says, “but releasing it now was the best time for us to put this into the world.” BME is only Locks’ latest project. He’s been actively making music since he arrived in Chicago in 1988. His endeavors have included the post-punk outfit Trenchmouth, The Eternals and Rob Mazurek’s Exploding Star Orchestra.

11
Haley Fohr
Best known for her solo project Circuit des Yeux, Haley Fohr’s focus nowadays is entirely on the band Jackie Lynn, whose second album “Jacqueline” dropped in April 2020. Jackie Lynn also includes Bitchin Bajas members Cooper Crain, Dan Quinlivan and Rob Frye. Fohr says the first record was “Suicide meets country rock,” but “Jacqueline” is “more of a genre exercise, focusing on disco, dance, glam, while still honoring the airy country folk we all love.” She sums up the latest chapter in the Jackie Lynn story as “Femme truck driver finds an existence!” Will there be a third chapter? Fohr says she has no plans on “continuing anything,” possibly referring to global uncertainty, but she retains a sliver of hope, referring to her work thus far as “Seedlings in a field, perhaps.” Jackie Lynn’s European tour has been rebooked for fall and they hope to reschedule a U.S. tour before the end of the year.

10
Jean Deaux
When we interviewed the ambitious young singer-songwriter-rapper for the cover of our 2018 summer music issue, she was about to release her first EP. “Krash” dropped in October. Eight months later it was followed by a second EP, “Empathy.” Both records showcased Deaux’s arresting ability to straddle the R&B and hip-hop worlds, winning her critical acclaim and a blaze of media attention. In her new mixtape, “Watch This!,” which dropped in May (and features guest appearances by Saba and Yung Baby Tate), Deaux focuses more on her hip-hop side—the first salvo in a planned shift away from singing and deeper into rapping. She continues her parallel career as a video director—not only of her own material, but of other artists as well. Her video for Chicago singer-songwriter Kaina’s “Green” was a highlight of 2019.

9
Patricia Barber
The singer-pianist-composer and longtime resident at The Green Mill was inducted into the American Academy of Arts and Sciences in 2019. “It turns out I have a following of scientists, which is so sweet,” she says, adding that she performed for them at the Academy reception. Also in 2019 she released her thirteenth album, “Higher,” the centerpiece of which is an eight-part art-song cycle played by jazz musicians. Barber and her trio spent a year touring the album, arriving back in Chicago in February, “just as we were hearing about the virus. Now, like everybody else, I’m sheltering in place with my wife Martha Feldman and using the time to study and write words and music.”

8
Spektral Quartet
Since we last profiled the indefatigable chamber ensemble, they’ve earned three additional Grammy nominations (for 2019’s “Yo Soy La Tradición” with Miguel Zenón and 2020’s “Fanm d’Ayiti” with Nathalie Joachim) and made its NPR Music Tiny Desk concert debut, all while keeping a full (pre-pandemic) calendar of tour dates and hometown concerts. One of its most memorable Chicago gigs was an event at the Music Box Theatre. “We presented an evening of queer voices through music and film,” says founding member Doyle Armbrust, “including Alex Temple’s ‘Behind the Wallpaper’ with vocalist Julia Holter, a commission by composer-performer Gene Knific, and the short ‘Uzi’s Party’ (shot in Chicago) by Lyra Hill (in partnership with the Chicago Film Society). It was an absolutely magical evening.” 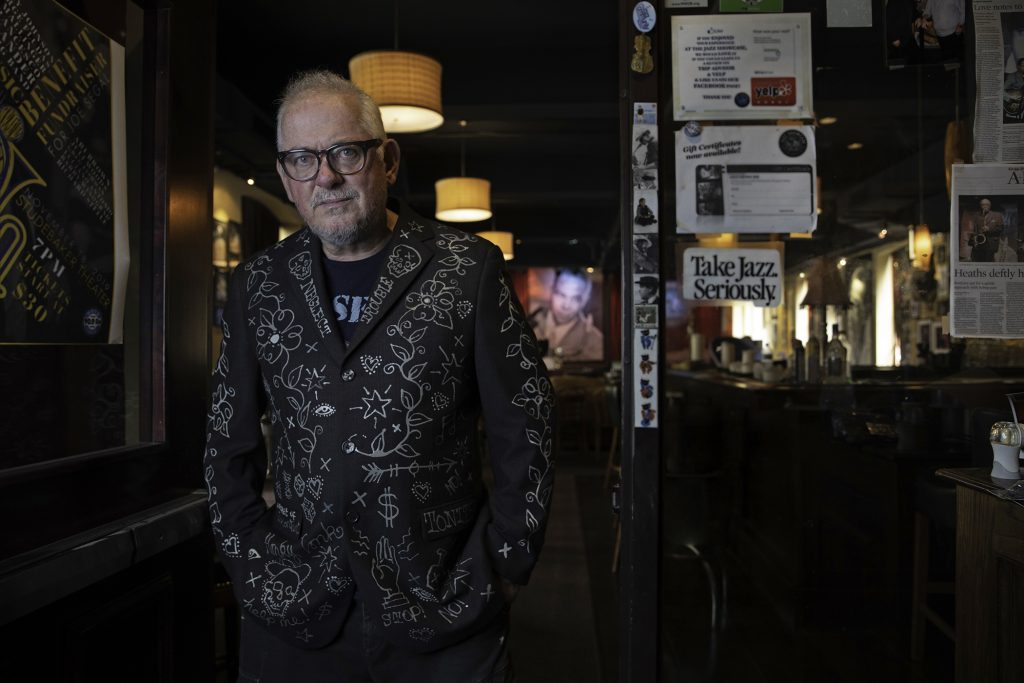 7
Jon Langford
The Welsh post-punk icon, alt-roots roustabout and gifted visual artist says 2019 was busy touring with The Mekons here and abroad to support their first proper album in eight years, forty years after the band’s full-length debut. Langford calls the response to “Deserted” “really great.” 2020 started great for Langford, with “more solo travels selling art and singing songs, then jamming onboard the Sirius Outlaw Country Cruise ship with Lee Scratch Perry.” Perry joined Langford’s Waco Brothers for three numbers on one night, and the following night Perry invited the band to play with him. The lockdown has meant “lots of painting, virtual gigs to raise money for bar and venue staff who’re not working and remote (lonely) recording sessions with Mekons.” In the meantime, a trip to Valencia to make a new album got cancelled. With a series of solo seven-inch singles for Spanish label Tiny Global Productions about to commence, the ever-busy Langford says he’s “making artwork and videos for that right now.”

6
Makaya McCraven
The jazz drummer and self-proclaimed “beat scientist” has not missed a beat since we last profiled him, remaining a ubiquitous presence on the performance scene, at home and abroad. McCraven released “Universal Beings” in 2018, which features recordings of live dates in New York, Chicago, London and Los Angeles, with a range of musicians that includes Tomeka Reid and Junius Paul. He followed in 2019 with “Moving Cities,” a collaboration with trumpeter Antoine Berjeaut, and this year released “We’re New Again: A Reimagining by Makaya McCraven,” featuring his interpretation of the final studio album by jazz and spoken-word legend Gil-Scott Heron. The album marked the tenth anniversary of Heron’s death and featured players including Ben Lamar Gay and Junius Paul.