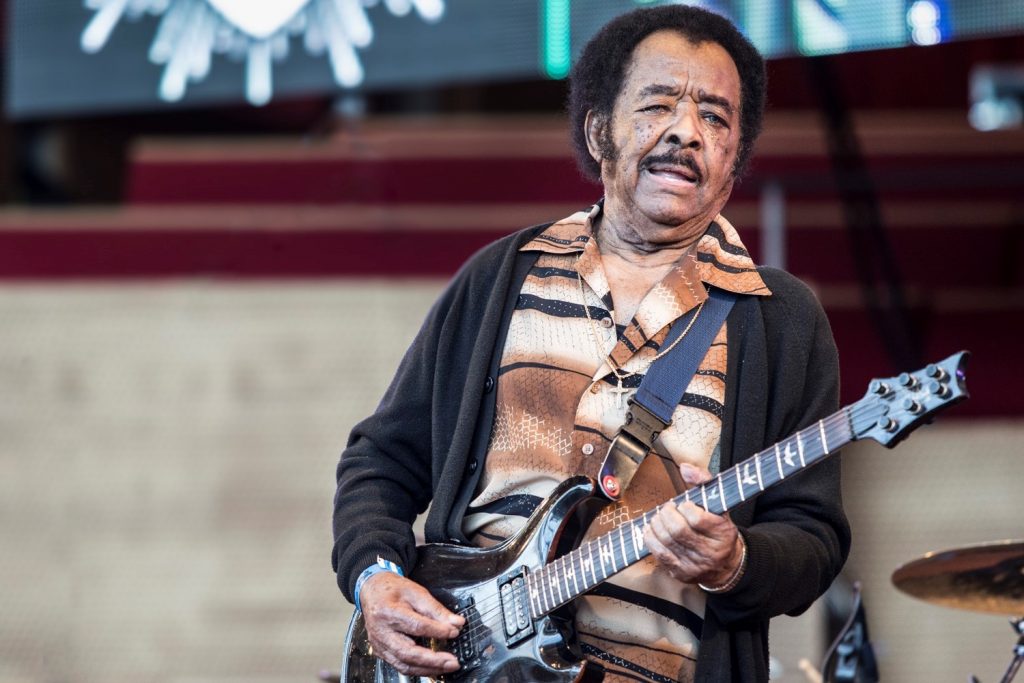 Jimmy Johnson isn’t headlining the Chicago Blues Festival this year or hosting his Sunday residency at the Lagunitas Brewing Company. But the pandemic can’t keep one of our greatest living bluesmen from doing what he loves; he’s entertaining live from his music room on Facebook. Each Saturday afternoon, Jimmy’s livestream concerts give listeners from Japan, Dublin, Belgium, Argentina, Mexico, Brazil and yes, even Rockford, Illinois, a taste of Chicago blues.

Jimmy finds the web shows therapeutic. “Seeing the hard times people are going through right now, it gives me a consolation to be able to play.” And at ninety-one and change (he turns ninety-two on November 25), he knows about the curative power of music. “If you don’t use it, you lose it,” is how he explains how he’s developed and maintained his computer chops; but he could equally be referring to his music skills. And use them he does! His voice has a plaintive, soulful power, high-register vocals originating when he was eight years old and singing in church. Jimmy’s guitar work is deft and seemingly effortless, alternating between strumming and driving solo. His striding piano chords—by which he characteristically modestly says he “gets by”—support his quieter tunes, all of which are steady and vibrant, the product of sixty-plus years of performing.

One can only marvel how a man of Jimmy’s age can deliver an hour-plus solo concert without referring to any paper or music. According to Johnson, he knows and can play thousands of songs from memory—mixing blues standards with lesser-known pieces and his own original work.

Livestream performances are not all Johnson has to offer: he has a new record, “Every Day of Your Life.” It’s his first album in a decade and marks a return to Chicago’s Delmark label, for whom he recorded “Johnson’s Whacks” more than forty years ago. Johnson applies his trademark sound of “blues and infused” to create a strong mix of old and new music that at times preaches, teaches, rocks and soothes.

The title track is funky and bouncy. Accompanied by jazz vocalist Typhanie Monique, he reminds us to live every day of our lives like it’s our last—’cause some day it may be. He pays homage to past and lesser-known performers by unleashing a searing version of Fenton Robinson’s classic “Somebody Loan Me a Dime” and a deeeeep, chilling rendition of “Strange Things Happening,” written by soul singer Percy Mayfield (who also penned “Hit the Road Jack” and “Please Send Me Someone to Love”). Jimmy’s original songs include the reggae-infused tune “My Ring,” about his first wife, who was “so sweet, but changed overnight” after she got his ring. In real life Jimmy rebounded, and has been happily married for fifty-seven years.

You can learn a lot about music history by listening to Jimmy Johnson. He can still recall hearing Elvis Presley, who hailed from Tupelo, Mississippi—just sixty miles from Holly Springs, where Johnson grew up—and how he became successful doing versions of songs written by Black artists like Arthur Crudup and Willie Mae Thornton. It can smart a bit that disc jockeys and other cultural gatekeepers didn’t pay attention to blues music until the Rolling Stones. Jimmy heard Ed Sullivan introduce the Stones as playing “new music” on his show in the sixties, when they were actually playing Howlin’ Wolf and Muddy Waters songs. Yet Jimmy presents an upbeat byproduct of what may be viewed as cultural misappropriation. From his perspective, live Chicago blues would not have survived the DJ boom that started in the late seventies clubs without the white market’s retrospective interest in American blues who influenced British artists like the Stones, Eric Clapton and Jeff Beck.

While we live in a world of doubt, one ongoing truth is that whether experienced live on Facebook or on his new album, Jimmy Johnson’s blues spirit is more relevant than ever. His music, stories and attitude remind us that even in difficult times music can bring us comfort, joy and hope for the future. In every show, this living legend reminds us to be kind to each other, respect each other… And to vote in November.