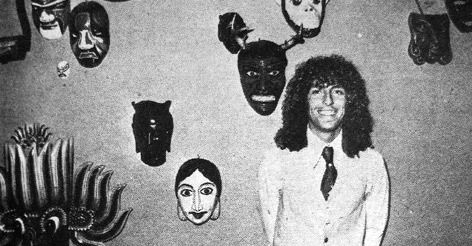 Chicago’s one-and-only godfather of nightlife, Dave Shelton—known to most as Dave Medusa—passed away last week. Shelton spent decades earning a reputation for lavish, cutting-edge parties and events that pushed the envelope and displayed his knack for imaginative entertainment.

“Voted by friends and peers to most likely start a kickass club in the afterlife,” says Al Jourgensen of Ministry, “he will be missed here but loved in the great beyond.”

“The messiah of misfits,” says Leroy Fields. “That’s what his club was. Young people became themselves there, expressed themselves there. The club was open and welcome to everybody.” Fields was part of a team that oversaw the club’s video-room programming, in an era when music videos were swiftly changing the industry.

The careers of major industrial and dance artists also received a huge boost from Medusa’s. “Dave was one of the first to start with the DJ stuff, house music and the industrial stuff with Wax Trax!,” says former employee Lorri Francis.

Wax Trax! Records acknowledged in a social media post the importance of Shelton to their own path. “Dave Medusa was the perfect partner in crime,” the post reads, pointing to collaborations with acts such as Front 242, Ministry, and My Life With The Thrill Kill Kult. “When the Wax Trax! label was getting started, Medusa DJs and VJs were instrumental in the label’s growth by including Wax Trax! releases in their reporting to national music services like Billboard magazine. This was invaluable for helping put Wax Trax! on national dance charts and reaching other DJs outside Chicago.”

At a time when Billboard had a hundred DJs from around the world reporting on what they queued on club decks, eight of those DJs were at Medusa’s.

It wasn’t all bands. The space hosted art installations and avant-garde performances.

The national press took notice: USA Today included Medusa’s on a list of the country’s top-tier clubs, and MTV’s groundbreaking “120 Minutes” program shot a segment there.

“You never saw many interviews with Dave,” says Francis, “because I don’t think he ever wanted to do that kind of thing. He just did it because he had so much fun with it, he loved all the energy that it brought. It was fun for him, and it made a lot of people happy.”

Francis met Shelton in the early eighties, and was struck by his generous nature. At the time, she recalls, “I didn’t have a place to live, I didn’t have a job, and he was like, ‘I have a room for you.’” I moved right into Medusa’s! He gave me a job, it was huge. That’s how he was, though. He would help anyone who needed help, he had the biggest heart.”

“He was famous just by being alive,” says Blue Pittsley, who managed Medusa’s from 1986 until its closing. “He struck me as somebody worth knowing.” Not long after meeting, Pittsley and Medusa would bond over a shared interest in becoming schoolteachers—a passion that came in handy while managing an all-ages dance venue. “We counseled kids who were thinking of dropping out, or running away,” Pittsley shares. “There was no such thing as a stranger at Medusa’s. Anybody who walked through the door was treated kindly.”

“It was a good place for anybody to go,” Francis adds. “Any type of person, it didn’t matter if you were a man, a woman, white, Black, Asian, goth, straight-edge, skinhead. All these different types of people in one place, but never any problems. It was a great place.”

Before opening Medusa’s, Shelton generated buzz with over-the-top events and parties around town. His first gathering tied to the Medusa name (a not-so-subtle nod to his own curly locks) took place in the mid-seventies, at the original Warehouse, with DJ Frankie Knuckles. And while the locations of parties organized by Shelton would vary, they became known for debauchery at almost every turn: late nights spilling over into the mornings and afternoons, with eyebrow-raising themes like funeral and barnyard decor served up for a melting pot of drag queens, suburban teens, street punks and dance enthusiasts.

Shelton opened Medusa’s with the intention of it being Chicago’s own version of New York’s famed Studio 54, “only younger, hipper, more creative and less pretentious,” according to the club’s website.

After cementing its legacy as one of Chicago’s most storied venues and performance spaces, the original Medusa’s closed its doors in 1992. About five months later, Shelton opened a shorter-lived Medusa’s location on Milwaukee Avenue, which closed just two years later. Finally, in 1997, Shelton opened a new Medusa venue in Elgin, which operates to this day.

“He was just a really great, fun, caring person,” says Francis. “He loved animals. If he saw [an animal in distress], he’d pick it up and take it to a vet, or give it a home. That’s the kind of person Dave was, more concerned about everybody else than himself.”

Fields seconds that sentiment. “He was very kind, he had time for people. He had a wicked sense of humor, and always brought a smile to your face.”

Like the venues that he created, Dave Medusa’s legacy continues. “This man is going to be missed by thousands of people whose lives he helped shape,” says Fields. “He created a space where you could be yourself.”

“He definitely had a sense of what he wanted to do in the world,” says Pittsley, adding that most will remember Dave Medusa’s heart. “And that’s what took him away,” he says. “The outpouring of sympathy has been pretty intense. Dave was so sincere, and committed to having a positive effect on young people. His unwavering honesty and integrity saw him through every situation and inspired all of us to be better leadership.”

Since Medusa’s passing, many have gathered to share memories and condolences at the site where Medusa’s opened its doors over thirty-five years ago.

“The corner that changed the lives of so many,” an admirer wrote in sidewalk chalk. “Thank you for bringing us together.”

Bill Furbee is a freelance journalist whose work has appeared in Cincinnati CityBeat, Detroit Metro Times, No Depression, Ghettoblaster, American Libraries magazine and other publications. He’s also a frequent contributor to Ripley’s Believe It or Not! and a board member of the Cincinnati Music Heritage Foundation, and enjoys repairing pinball machines in his time off.

This was beautiful, thank you.