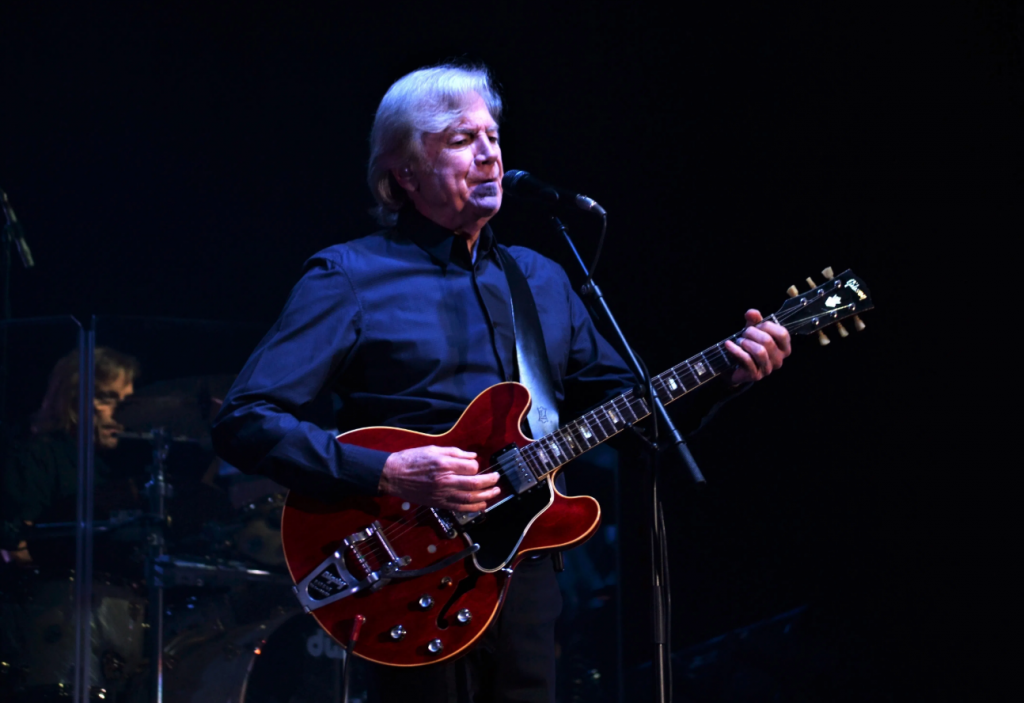 In January 1966 the teenage Justin Hayward released his first single, “London Is Behind Me,” with the B-side “Day Must Come.” The tunes are bouncy and engaging, the kind of skiffle-on-hyperdrive stuff that had propelled the Beatles to international fame. But even as Hayward’s debut made its tentative foray onto the charts, the Fab Four were ripping a hole in the fabric of space-time with “Revolver”—an album that  rendered skiffle as culturally irrelevant as polka.

Later that same year, Hayward—sensing which way the wind was blowing—joined a band himself. The Moody Blues, while not as influential as the Beatles, did manage to pioneer a new genre, fusing orchestral sound with ambitious, expansive compositions. Progressive rock—or, as better known, prog rock—dominated for a while, but fell out of favor in the eighties and never really recovered. In 2017, James Parker in The Atlantic, while not mentioning the Moody Blues specifically, labeled prog rock “the whitest music ever”—and in the current climate, that’s a burn.

The Moody Blues soldiered on through the derision—and there’s been a lot of it to soldier through. My copy of “The Rough Guide to Rock” (third edition) doesn’t even have an entry for the band. (The Monkees get one; as do Sky Saxon, Jawbox and Cockney Rebel.) When the Moody Blues were inducted into the Rock & Roll Hall of Fame in December 2017, Hayward was ecstatic. “This induction is validating the music our fans really, really love,” he said. “I’m so pleased for all of them.” Your heart almost breaks for the guy: imagine being so beat down that you view the Rock & Roll Hall of Fame as validation.

Still, for an entire generation or two, the music of the Moody Blues is indelibly fused to our DNA, and songs like “Nights In White Satin” are almost as familiar—and iconic—as “The Star-Spangled Banner.” Hayward wrote “Nights” when he was just nineteen, and he provided the vocals as well. It’s an uncanny performance; the way his voice ascends on the bridge to that cosmic cry of “Oh, how I love you” has a thrillingly ageless quality. You might be listening to someone twice or three times Hayward’s tender age—or to some sallow-cheeked immortal, trudging across centuries like sand dunes.

The Moody Blues are still together and occasionally tour, although they haven’t released an album since 2003. Meanwhile, through all the tumult of the band’s rise, fall and search for a comeback, Hayward has diligently continued the solo career he kicked off that January in 1966. And unlike other artists who maintain both band and solo careers (Phil Collins of Genesis, for instance), Hayward has kept his solo identity distinct from the Moody Blues—trading the band’s sumptuousness and grandiosity for a leaner, intimate sound; a singer-songwriter vibe. And he built a following; during the seventies and eighties, his albums, while never chart-toppers, routinely placed in the top one-hundred.

Hayward brings his solo acoustic show to City Winery (1200 West Randolph) for two nights this fall, November 1 and 2. The tour comes, as tours often do, on the heels of a new release. Earlier this year Hayward dropped what is billed as an EP, but is really a digital single; the only thing distinguishing it from “London Is Behind Me” / “Day Must Come,” is that with “One Summer Day” / “My Juliette,” we’re not sure which is the B-side.

It’s interesting to listen to these new songs with the debut tunes from 1966 in mind. “One Summer Day” begins with a liquid guitar riff, a sonic universe away from the jangly, metallic chords of “London Is Behind Me;” and the sense of youthful promise and adventure in the latter tune is balanced by the seasoned maturity of the newer lyrics: “Maybe it’s just time for us to treat each other well,” Hayward sings. “I hope it’s not just fantasy / Maybe time will tell.” So even now, he hasn’t lost the forward-looking attitude he had as an eager teen.

Another thing he hasn’t lost is that unmistakable voice. It’s a supple, gorgeously evocative instrument that seems not to have been touched by time… even five-and-a-half decades’ worth.

UPDATE: Hayward’s November shows at City Winery have been rescheduled for May 23, 2021.