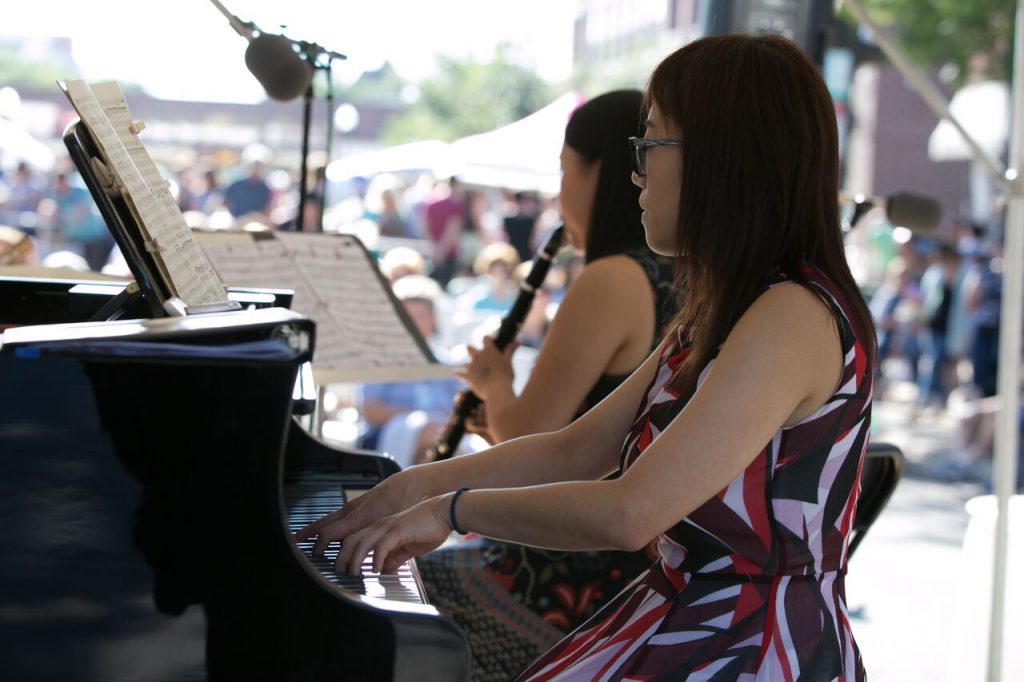 Thirsty Ears has its roots in reinvention. Five years ago, Access Contemporary Music founder Seth Boustead (also a composer, performer and frequent Newcity contributor) noticed that Chicago’s street festivals had lost the ethnic and community identities that once gave them vitality. “They had this kind of sameness,” he says. “Same bands, same vendors, same ribs.” His goal with Thirsty Ears, the city’s first and only all-classical street festival, was to bring particularity back into the mix. And now, with the festival’s fifth annual outing, he’s had to reinvent again—this time, of course, due to the pandemic.

There are elements of a street festival that can’t be concepted out—chief among them being the street itself. In Thirsty Ears’ earlier incarnations, the festival took place on the stretch of Wilson Avenue, just west of Hermitage, that lies directly outside the door of ACM’s Ravenswood location. It was an ideal setting: urban but still leafy, commercial but quiet enough for the nuances of the performances on the festival stage to be heard. The festival was also able to double-dip its program by featuring additional performances inside the adjacent All Saints Church. The festival unwound over the course of the day and into evening, with traffic flowing in and out more or less continuously, as is usually the case with street festivals.

This year flows of human traffic are problematic, at best, so Boustead has taken safety measures. The first was to move the concert stage to a parking lot, that of neighboring winery VIN312. His second was to break the event into ninety-minute concerts—one on Friday, three each on Saturday and Sunday—with ticket-buyers choosing from a pull-down menu the one they’d like to attend. “I’m saying just one ninety-minute performance per ticket for right now,” he says. “But there’s room for about a hundred people, socially distanced, in the parking lot. So as long as we’re maintaining social distancing, I’m okay with people coming back.” The ninety-minute length also gives the festival a half-hour between sets to get people out, sanitize everything, and get the next group in.

In all other respects, there’s an attempt to remain true to the festival’s low-key character. “The vendors are going to be neighborhood businesses or people associated with music or the arts,” Boustead promises. “You’re not going to see T-Mobile as a vendor.” Performers include The Growlers, Marianne Parker, Jonathan Hannau, Duo Forzando, Kyle Flens Percussion, Black Oak Ensemble, Chamber Music at Bethany, 5th Wave Collective, Parker-Watkin Duo, Wurtz-Berger Duo, Picosa and Boustead himself. In addition, the Sound of Silent Film Festival, which commissions newly composed scores performed live to modern silent films, is a marquee ticket event on Friday night.

But this strategic deck-reshuffling is just half of Boustead’s reimagination of the festival. The other half is an entirely separate and independent component: an audio walking tour of the Ravenswood neighborhood, with stops at such sites as the Deagan Building, Krauss Music Studio, Carl Sandburg House, Giddings Plaza, Welles Park and the Davis Theater. Each stop on the tour features a talk on what makes it unique, plus a one-minute piece of music commissioned by a local composer and directly inspired by the site itself.

“I’ve seen the Krauss Music Studio a million times,” says Boustead; “it’s right there at Lincoln and Wilson. But hearing the people who own the building talk about it—the narrations are all by the people who are from the locations—it was really eye-opening for me. There were some things I didn’t know. I didn’t know the owner killed himself on the second floor—only two years after his dream place opened. So these stories—and the way the composers responded to the stories and to the sites—it’s really personal and it was really fascinating to put together.”

Boustead had originally thought of uploading a Spotify playlist for the tour. “Then my wife and I went on this audio tour in Prospect Park in Brooklyn,” he says, “and at the end of it we met the people who put it together, and they were the ones who run Gesso,” a digital audio guide company. “We started talking and I told them what I wanted to do, and they said, ‘We’re a startup, and we want people to download our app. So do you want to use our tech for free?’ And I said, ‘Fuck yeah.’ That was super-helpful.”

Most of Gesso’s guides are start-to-finish; Thirsty Ears’ tour is different, because the sites included can be far afield from each other. “It’s a choose-your-own-adventure thing,” Boustead says. “My guess is that most people won’t do it all in one go. You have two weeks—though honestly it’s going to live on Gesso forever. Also, it’s okay if you just do it from home, of course—you’ll still hear the music—but nothing beats standing in front of the sites while listening to it. So one thing we did was set up incentives from area businesses at several of the sites.” The Welles Park stop, for instance, features a discount coupon for nearby Grafton Pub.

Thirsty Ears is one prong of Boustead’s plan to keep ACM going. “I’m hoping we don’t have to close one of our school locations,” he says. The organization currently operates out of Ravenswood, Rogers Park, Avondale and the South Loop. “In Ravenswood, we’re doing a big remodeling project that I’ve been planning for years. We’re basically banking on having in-person lessons within another year or so. We’re putting a coffee shop in the lobby, turning our larger classroom that faces the street into a livestream studio. Starting in January we can produce content in-house. I’m trying to cover all my bases at once, which is challenging. Meantime, we’re hanging on for dear life.”