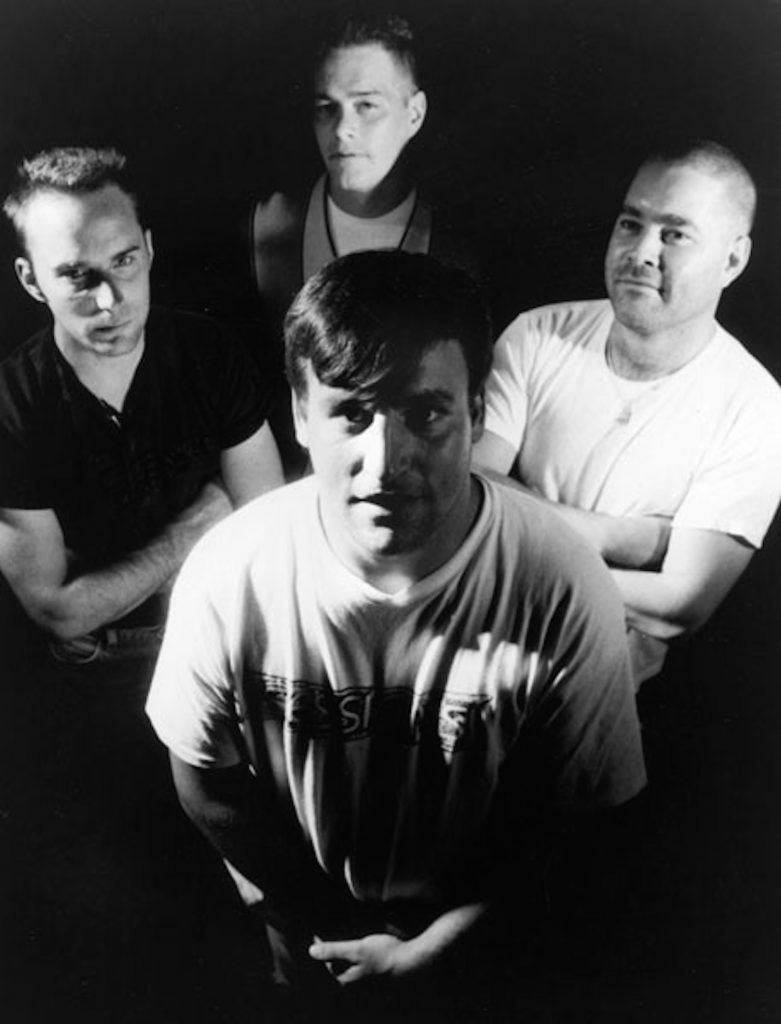 I have many regrets I can trace back to my college years (an English writing major, trying to take biology and Latin during first periods, not properly using the career services department, an ex-wife), but one of them is not booking Pegboy to play a show when I was in charge of concerts.

Sure, there were triumphs, such as booking Material Issue with openers Madder Rose, and Green with openers The Lilacs, but there were also choices like booking Harm Farm instead of Poster Children and skipping Willy Porter but booking Wally Pleasant (although I don’t regret the latter) and rebooking Judy Gorman-Jacobs when we could have had a shot at either Cocteau Twins (their production budget would have bankrupted the school) or School Of Fish, which in retrospect might not have been worth those “Three Strange Days.”

An intriguing package from one of the booking agents contained a cassette from Pegboy called “Three-Chord Monte.” That EP was released in 1990 shortly after Pegboy (named after an apocryphal nickname for a young boy who was used by seamen for sex) was formed by John Haggerty, former guitarist for Chicago punk legends Naked Raygun and his brother Joe (of The Effigies and before that, Bloodsport) on drums and Larry Damore and Steve Saylors, who were in Bhopal Stiffs together. (Damore sang and played guitar and Saylors played bass.) John Haggerty had produced Bhopal Stiffs’ demo three years earlier.

“Three-Chord Monte” was the first release by Touch and Go label offshoot Quarterstick Records, which later put out music by Henry Rollins, Mekons, Bad Livers, Calexico, June Of 44, Rachel’s and Rodan. The record was produced and engineered by Iain Burgess, who also worked with Big Black, Naked Raygun, The Effigies, Ministry, Green, Poster Children, Jawbox, the Cows and the Didjits.

Thirty years since their formation and that debut EP, it’s time for an appreciation of Pegboy, a band that, due to their lineage and frequent commingling, too often were overshadowed by the legacy of Naked Raygun. What’s lost in time is how strong Raygun’s final album with John Haggerty was, not only due to his stellar guitar playing but also attributed to his strong writing on 1989’s “Understand?” Tempos, arrangements and songwriting in general suffered on Raygun’s final long-player, “Raygun… Naked Raygun,” released in 1990, their first record with Haggerty’s replacement, Bill Stephens (a fantastic punk rock guitarist in his own right). Loyal Raygunites considered it the band’s nadir (“Saxophone? What the hell is this?”) and the group broke up in 1992. Naked Raygun reunited in 2006, have played live off-and-on and have released three singles via Riot Fest, but they have yet to release a long-hinted full-length follow-up.

Notwithstanding the pedigree of the band and those involved in the release of their debut EP, what stands out is the quality of the songs. It begins with blazing, anthemic guitars, rapid-fire, explosive drumming and passionate screams of “Through My Fingers.” Like the best Raygun cuts, it’s like someone discovered a lost Buzzcocks demo from 1979, but this one sounds like it was turned up to an eleven-like volume in 1990. Damore’s vocals, blunt to the point of sounding bone-headed are gruff like a vocoder unpacked from a razor-blade suitcase but never diminishing his bleeding-heart passion. “Damore’s blunt vocals (verging on the meat-headed, some might say),” I once wrote, “sometimes mask the intelligent, insightful and proto-emo lyrics,” and I stand by that assessment.

Whereas Naked Raygun merges the political with the personal, Pegboy’s subject matter almost always shines on the heart light—witness the closer “Method” on which Damore sings “There’s a method to your madness / It’s your sadness / I remember when you used to hope for / The hope there was some magic.”

The wistfulness is palpable, and he goes on to sing that

There is indeed a method to the madness that is the music of Pegboy, and it’s always compelling, and on “Three-Chord Monte,” all they needed was three chords and some truth.

The quartet followed up their debut EP in 1991 with the full-length “Strong Reaction,” and it was just as strong, if not stronger. Kicking off with the powerful, brooding title cut, the foursome brings ten new songs to the table in under half an hour. Only “Strong Reaction” approaches four minutes, and just as “Through My Fingers” served as a statement of intent for its predecessor, so does this song for their first album. The lead guitar part blazes in like flaming meteorites entering the atmosphere, and the drums and bass crater the earth’s surface with pummeling precision. Damore cries out on the first verse:

He growls into the chorus, which turns the mission of the letter carrier into the trial of the heart bearer:

“That’s all right and that’s okay,” Damore dismisses his feelings, and here the bitterness is salient.

Damore’s vocals have never been the inspiration for other punk-rock lead singers, and I doubt he would care. If there’s one word to characterize his delivery, it’s “serviceable.” He’s passionate and by no means a turn-off, but his mission is to convey the lyrics and give another bullet to the chamber that is the firearm of Pegboy’s foursome. He doesn’t have Naked Raygun leader Jeff Pezzati’s cool detachment and erudition, but it’s just as well; the last thing Pegboy needs is another reason to be eclipsed by Raygun.

“Not What I Want” comes off like an early, pre-sell-out Soul Asylum scat and the bass line on “What To Do” threatens to alchemically alter tectonic plates to rubber. The malaise and frustration on these cuts boils over the vinyl’s grooves, so following those tracks with the bracing instrumental “Locomotivelung” is a wise choice, if only to give the listener something to mosh away from the darkness. “Superstar” is the other clear single here, so much so it’s hard to believe it’s not a cover (easily confused with the Delaney & Bonnie classic made popular by The Carpenters), and Damore begins by shouting that “If I could be a superstar / I’d get away would go far / And I would get away, get away from here” and continues on the chorus that “With all the things that I do / I’m tired of playing for you / I’m done wasting my time / Got to live my own life.” It’s a stunning dismissal to anyone who is a fan or would like to be a fan of Pegboy—the ultimate “denial,” as Nirvana would put it on “Smells Like Teen Spirit” on “Nevermind,” released only nine days later.

Just in case that number was too bright and cheery, “Superstar” is followed by a mosey through a “Field of Darkness” (released as a single before the album dropped, in August 1991) and by the time we get to “Time Again,” blistering guitar solo notwithstanding, the world-weariness lays on the listener like a layer of hot asphalt while being flattened by a steamroller (“My father went the same way,” as George Kennedy’s character says in the “Naked Gun”).

As if to say “Get the ‘F’ out of the way,” Pegboy released the “Fore” EP in 1992, again leading with a strong upper-cut in the form of “Never A Question” and there was never a question that they would let go of their anger, their rocketing tempos and blistering passion. You may as well soak your fists in gasoline and light them on fire, while the denizens of the roiling mosh pit try to keep you away from the nearest mirror. Given that Saylors had sailed away on bass due to work commitments, friend and engineer Steve Albini played bass on these four tracks, so the bass is less elastic and more workmanlike, as he always tries to give the band’s natural sound the spotlight. The crunch and roll of “Witnessed” oozes regret and the ennui of the straight-ahead punk anthem “Minutes To Hours” anticipates the pop-punk impulses of SF Bay popularizers Green Day. “Jesus Christ” closes the quartet of cuts on “Fore” and it’s an epic metal pummeling that lifts from “Jesus Christ Superstar” but doesn’t do much else—at almost three-and-a-half minutes, it might as well be a live Led Zeppelin jam that covers an album side, compared to their other “hit it and quit it” song lengths.

For 1994’s “Earwig,” Naked Raygun’s Pierre Kezdy brought his bass, striped and large-mouthed, to Pegboy and the group turned the term “ear worm” on its ear, pulling the pins on another stellar set of punk-rock grenades. It kicks off with“Line Up,” which collapses into chaos, then the shame celebration of “Sinner Inside” that threatens to reignite Sodom, and “Blister” may or may not be about John Haggerty’s fingers after burning through these twelve tracks in just over thirty minutes.

Pegboy’s version of Mission of Burma’s “That’s When I Reach For My Revolver” on “Earwig” is one of their best covers, but they also recorded “Emerald” for a Thin Lizzy tribute album and the sprawling guitar chords on their rendition of Cheap Trick’s “Surrender” sound like shards of stained glass raining down on the floor of a cathedral. Never mind watching Rome burn, rather witness Paris spontaneously combust.

“Cha-Cha-Damore,” Pegboy’s final full-length, released in 1997, might not be their finest moment, but still has much to recommend. As usual, there are actual guitar solos here and there (a patented Pegboy middle finger to punk-rock tradition) and their recurrent sense of humor forms a silver lining around the band’s dark, screamo sensibility (as in “In The Pantry of the Mountain King,” a tongue-in-cheek allusion to prog-rockers King Crimson’s “In the Court of the Crimson King”). On the searing shout-fest “Dangerace,” they out-Nirvana Nirvana (and clearly influenced later Chicago bands like The Arrivals) and the dark table setting at the beginning of “Hey, Look, I’m a Cowboy” before galloping forward is a clear testament to Raygun’s influence, and their predecessors, Buzzcocks.

Pegboy split a seven-inch single with Kepone in 1997 (“Dangermare”), included one non-LP cut on the Thick Chicago punk compilation “Magnetic Curses” in 2000 and inspired a stellar tribute album via Underground Communique in 2006 (Matt Skiba of Alkaline Trio, Shot Baker, Haymarket Riot, The Story So Far, Rollo Tomasi and Dead Town Revival are among the twenty-four contributors), but that was it for recordings.

The band mostly disbanded in 2000, reunited in 2006 at Riot Fest and played a Touch and Go twenty-fifth anniversary show in 2007, and although they are “pretty much inactive, Pegboy get together once a week to ‘practice,'” as well to play the occasional show in Chicago, according to the Touch and Go/Quarterstick website. Since Naked Raygun reformed in 2007, Kezdy went back to playing with them (on October 9th, 2020 he passed away from cancer at age 58) and “Skinny” Mike Thompson handles bass duties as needed. Although Pegboy’s thirtieth reunion shows booked for May were rescheduled, they are scheduled to play October 17 at SeatGeek Stadium in Bridgeview.