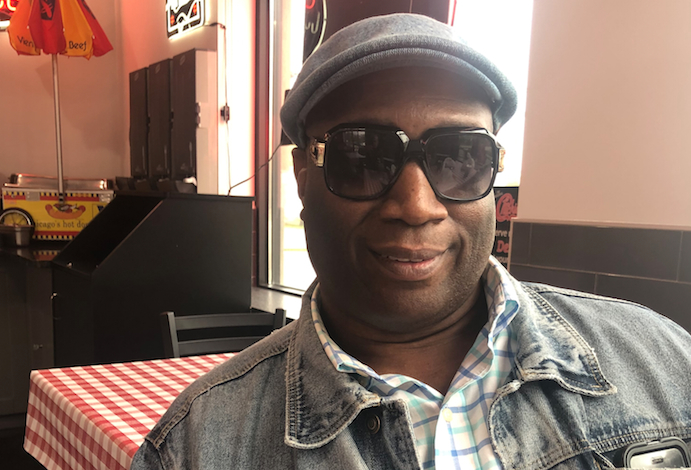 Radio is a connective heartbeat for those who cannot see.

It opens the soul to imagination, possibility and a world where people don’t view colors as a barrier. Chicago blues drummer Kenny Coleman is blind.

Coleman, fifty-four, has played with Lurrie Bell, Sugar Blue, and Oscar-winner Jennifer Hudson in her earliest years. A couple of weeks ago he launched the “Blind Boy Blues Show,” an ambitious four-hour music and talk radio show on Buddy Guy’s online station. Coleman has created a similar hour-long television show with live blues music, which begins November 19 on YouTube. Joseph “Mojo” Morganfield, Jimmy Burns and blues singer Peaches Stanton are scheduled. The shows are taped without a live audience at the 35th Street Studio at 1658 West 35th.

I’ve known Coleman for several years. I’ve seen him lead the choir at Christ Temple Church in Maywood. I booked him as a guest on my WGN-AM radio show. He is one of the most positive musicians I have encountered. When Coleman lost his gigs because of the pandemic, he was not going to sit on the sidelines.

COVID-19 also resulted in Coleman being laid off from his job in career and student services at the downtown Illinois Media School (IMS). “What could we do with the clubs closed?” Coleman asks over lunch at Chickie’s Beef in Hillside. “What could we do to bring music to people?” So now, Coleman plays music mixed with talk at 8pm every Wednesday at Buddyguyradio.com. Before the November 3 election, he booked political guests such as Willie Wilson and congressman Danny K. Davis.

Coleman was born with the hereditary Leber’s disease, caused by mutations in the genetic code. “For years they thought it was retinitis pigmentosa because they are so similar,” he says. “I always had bad vision. We knew by the time I would be in my forties I would lose all my sight. My two brothers have it, my sister doesn’t have it.” Coleman is a single father. His twelve-year-old daughter Kendle does not have the disease.

Losing his sight did not affect Coleman’s playing. And while there are many unsighted blues artists—Blind Willie McTell, Blind Lemon Jefferson, Blind John Davis—Coleman was hard-pressed to think of a blind blues radio host. (The late guitarist Jeff Healey was blind and hosted a comprehensive blues and jazz radio show on a community station in Toronto.) “But Stevie Wonder owns a station (KJLH-102.3 FM) in California,” he says. “It’s good that I’m doing this.”

Coleman wanted to meet at Chickie’s. His insurance agent also insures Chickie’s. Coleman’s friend and North Lawndale neighbor Roger Sanders drove him to the restaurant in his 2004 GMC Envoy. Sanders has been taking Coleman to gigs for more than twenty years. Coleman laughs and says, “We used to put all my drums in a Mustang.”

Blues great Howlin’ Wolf (Chester Burnett) is buried across the street from Chickie’s in Glen Oaks Cemetery. Coleman, indeed, has a story for every occasion. “I dated his niece in the 1980s,” he says. “She used to work at the Out of the Past record store [4407 West Madison in Chicago].”

Coleman grew up in North Lawndale. His late father Felix was head polisher at Mojonnier Brothers, a Chicago beverage processing equipment firm. Coleman’s mother Clara worked for Chicago Public Schools. She left CPS in 1976 to work for the O’Hare Hilton, holding positions from concierge to computer work. “They held it down and were able to put four kids through school,” he says.

The Coleman family worshiped at St. James Temple, a storefront church at 79th and Peoria. Coleman started playing the drums in church at the age of four. “My grandmother was trying to make me a guitar player,” he says. “I walked up to a set of drums and I could play.” Coleman grew up playing gospel, but when he attended Lake View High School he stretched into jazz, rock and even punk. “But I really got turned onto [the band] Chicago in 1980,” he says. Danny Seraphine was the drummer for Chicago between 1967 and 1990 and he played with a jazz flair.

Coleman studied under Lake View band director Dominic Simonetta, who died in April at the age of ninety-three. During the heyday of the Mister Kelly’s supper club, Simonetta played drums behind Billie Holiday and Anita O’Day. “If it wasn’t for him, I wouldn’t be the person I am today, outside of my parents’ influence,” Coleman says. “He taught me a lot about life. How to deal with people in music.”

By his junior year of high school Coleman was taking lessons with Leo Murphy, a former drummer-percussionist with the Chicago Symphony Orchestra and current vice president of the Chicago Federation of Musicians. “Kenny has a great set of ears,” Murphy says. “He adapts and learns styles quickly. You get a performance that achieves the goal of the artist he is accompanying. It has been a pleasure to watch him grow into the high quality musician he is now.”

Murphy was working with Coleman during the time the drummer lost all his sight. “If anything, it attuned his skills for listening and interacting to an even higher level,” Murphy explains. “Somebody will say, ‘I want something that feels like this.’ He listens to it once, he’s got it. And not only does he get it, he makes it something of his own. I went through that with him on the loss of his sight. But he’s a strong fellow and has a strong faith connection. He’s been a hard worker and a good father.”

The radio brought a world of music to the Coleman house. “We started with WVON, the Voice of the Negro,” Coleman says. “We moved over to WLS (AM) Steve Dahl, Garry Meier. I remember Larry Lujack. Steve Dahl is extremely funny. I played in all kinds of bands, rock, jazz and metal. I listened to the Loop.”

Coleman was gifted with a sense of rhythm and the gigs came easy. He played drums and percussion on Jennifer Hudson’s earliest recordings in 1997. She sang “Only the Building” and “Been Livin’” in “This Far By Faith!” at the ETA Creative Arts Foundation.

Coleman created a blues-rock shuffle that helped him find work in harp player Sugar Blue’s band during the 1990s. He backed the Jewish psychedelic-blues-rock guitarist Lazer Lloyd. He also played with Pinetop Perkins at Rosa’s Lounge, and right before the pandemic, he was playing with Lurrie Bell at Rosa’s. “I’ve tried to master blues, Latin, jazz, rock,” he says. “That way I knew I’d always work. I learned my blues shuffle at Rosa’s on the radiator, watching (Rosa’s owner-drummer) Tony Mangiullo and other blues guys. At the time I was straight-ahead gospel.”

Coleman also has a sly sense of humor. When I kept asking him about photographs for this story he replied, “With me not seeing, I don’t worry about pictures.”

The positive attitude in which Coleman views the world can be attributed to his father. “He never said we were handicapped,” Coleman says. “We were ‘handi-capable.’ He taught us how to do everything. He never let us make excuses. Mine is just the eyes. Think about the people who have no hands, no legs. It can be worse. You have to do what you have to do.” It is sound advice to see us through these times.