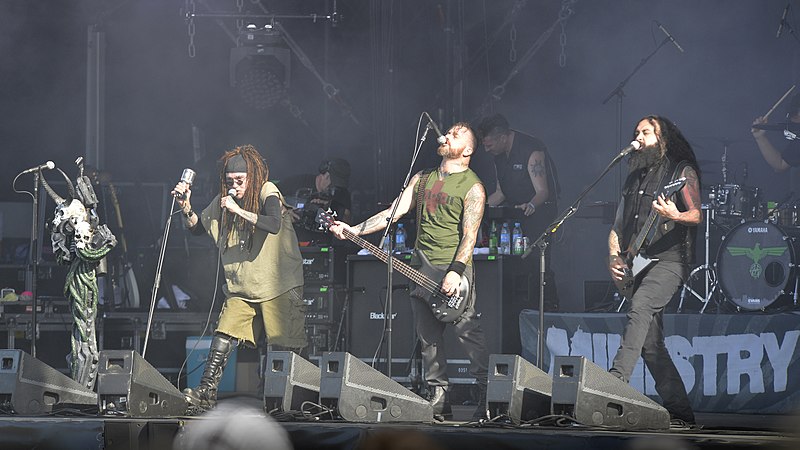 When Ministry released its groundbreaking album, “The Mind is a Terrible Thing to Taste,” thirty-one years ago, industrial music was seeping into the mainstream. Moving out of the underground, the bastardization of EBM, house and synthpop infiltrated suburban homes and Billboard charts. Bands like Nine Inch Nails, Skinny Puppy and Front Line Assembly were unexpected MTV stars and the scene spread worldwide, finding homes in Japan and Europe. But it was Chicago that would be one of industrial’s hubs. Though Ministry became the face of Chicago industrial, many of the scene’s most influential figures call the city home. No matter if they’re quietly releasing music or have been forgotten due to the cruelty of time, these acts left their mark on the scene.

A New Sound is Born
Born from electronic dance music, mechanical synths and noise experiments, industrial emerged at the end of the seventies and was popularized in the UK by bands like Throbbing Gristle. The music spread at the dawn of the eighties, creating a buzz in Chicago’s underground scene. Industrial continued to grow with the help of Jim Nash and Dannie Flesher’s Wax Trax! Records. The store on Lincoln Avenue and its label were a haven for artists too weird or risqué for the mainstream. Supporting music he truly cared about, Nash signed acts like KMFDM, Meat Beat Manifesto and Young Gods, but Ministry proved to be the label’s biggest success.

Formed by Al Jourgensen in 1981, the band became a staple of Wax Trax! with its debut singles “Cold Life” and “I’m Falling.” Its catchy synth-pop sound was a mainstay in local clubs, which caught the attention of Arista Records. Arista signed the band in 1982. Stevo George, who joined Ministry’s live lineup the year prior, worked with Jourgensen on the band’s debut album, “With Sympathy” (1983). Despite praise from critics and fans alike, Jourgensen despised the music, feeling it didn’t represent what he wanted to create. Searching for complete artistic freedom, Ministry returned to Wax Trax! in 1984.

Transforming Ministry from a sugary synth-pop band into an industrial powerhouse, Jourgensen teamed up with the Blackouts’ Paul Barker and Bill Rieflin. This lineup released a string of successful singles, including “(Every Day) Is Halloween” and “All Day,” which hinted at its new sound. After signing with Sire Records, they continued to evolve, going in a heavier, darker direction discovered on their second album, “Twitch” (1986).

Influenced by groups like Front 242 and Cabaret Voltaire, the album bore no resemblance to the band’s synth-pop origins. This new sound was aggressive and unfriendly with its use of distortion, white noise and sampling. But it was only the beginning of Ministry’s rebirth. The band’s follow-up, 1988’s “The Land of Rape and Honey,” was meaner, uglier and heavier than anything it had done before. Expanding the abrasive sound of “Twitch,” it focused less on synths and more on crunchy heavy metal guitars. Fully shedding its bubblegum-synth past, Ministry had arrived.

With newfound success in the underground, Jourgensen and Barker focused on the next album. Little did they know that “The Mind is a Terrible Thing to Taste” (1989) would mark another turning point for Ministry. Continuing the harsh, guitar-driven sound, the album started Ministry’s journey from the underground to the mainstream, which it would finally break with 1992’s “Psalm 69: The Way to Succeed and the Way to Suck Eggs.” Singles “Jesus Built My Hotrod” and “N.W.O” became MTV favorites, while the latter earned a Grammy nomination. The album brought industrial to the masses and established the band as a major player.

Despite lineup changes, infighting and Jourgensen’s drug addictions, Ministry pushed forward, releasing nine more albums, including “Filth Pig” (1996), “Animositisomina” (2003) and “Houses of the Molé” (2004), the first in a trilogy that condemned the Bush administration. “The Last Sucker” (2007) would be Ministry’s final album until re-forming in 2011. The death of Mike Scaccia in 2012 would put the band on hiatus again, with “From Beer to Eternity” (2013) signaling Ministry’s end. Three years later the band again regrouped; its latest album, “AmeriKKKant,” was released in 2018.

Ministry has a tumultuous history with all the clichéd highs and lows, yet it thrives. Its no-holds-barred, violent approach to industrial still reaches new generations of fans. Jourgensen remains one of the scene’s most prolific players, establishing successful acts including Revolting Cocks, 1000 Homo DJs, Lard and Pail. While Ministry didn’t invent the genre, it elevated it into a sound that could not be ignored.

Let’s Start a Kult
As Ministry was in the midst of transforming itself, another landmark group took shape. After meeting on Ministry’s “Twitch” tour, Frankie Nardiello and Marston Daley formed My Life With the Thrill Kill Kult in 1987. The project began as an art film with the same name (which was never finished). The movie’s soundtrack caught the attention of Wax Trax! Records, which wanted to release it on the label. After adopting the film’s name and rebranding themselves as Groovie Mann and Buzz McCoy, Nardiello and Daley released Thrill Kill Kult’s first EP later that year.

The band’s debut album, “I See Good Spirits and I See Bad Spirits,” followed in 1988. In a way similar to their peers, their music used harsh guitars, distorted melodies and samples from horror movies. But what made the band stand out was its revolving lineup, over-the-top campy image and pseudo-Satanic associations. Thrill Kill Kult was tongue-in-cheek about its occult imagery. Using Satanic and religious iconography for satire rather than serious proclamations, the band provoked controversy with singles “Nervous Xians” and “Kooler Than Jesus.” They continued to stoke the flames on their second album, “Confessions of a Knife” (1990), which featured even more Satanic imagery and blunt references to sex.

By its third album and final Wax Trax! release, 1991’s “Sexplosion,” the band moved away from its industrial roots and cultivated Satanic image. Leaving the darkness behind, Thrill Kill Kult adopted a sleazy disco sound with a focus on heavy dance beats and psychedelic grooves. It became a commercial success and helped them land a deal with Interscope Records. The unique sound also earned spots on movie soundtracks, including “The Crow,” “The Flintstones” and “Showgirls.”

As it evolved, the group outgrew its industrial image for one that was indefinable. It continued to expand its sound, incorporating lounge music, funk, garage rock and rockabilly on albums like “Hit & Run Holiday,” “Gay, Black and Married,” and “13 Above the Night.” While the band reinvented itself with each record, its love of camp, decadent nature and discussion of all things taboo did not change.

In 1996 the band left Interscope and teamed up with Red Ant Entertainment for its sixth album, “A Crime for All Seasons.” They returned in 2001 with “The Reincarnation of Luna,” released on its own Sleazebox Records. In addition to working on side projects Bomb Gang Girlz, Darkling Kandie and The Katastrophe Klown, Thrill Kill Kult continues to release music, including its latest release, “In the House of Strange Affairs.”

Throughout its thirty-two-year history, Thrill Kill Kult constantly pushed boundaries with its ever-evolving sound, controversial image and love for all things decadent. Always the wild card of the scene, the group took the foundations of industrial, injected it with their wicked sense of humor, love of disco and lots of dirty sex for a sound that could only be described as My Life With the Thrill Kill Kult.

A Scene on the Rise
By the end of the eighties, industrial music had moved into suburban homes, and was no longer confined to a niche audience. Ministry and Skinny Puppy were on the rise and newcomers Nine Inch Nails further propelled industrial with “Pretty Hate Machine” (1989). Inspired by the growing scene, performance artists Jim Marcus and Van Christie formed Die Warzau in 1987.

The pair recorded several demos before meeting the head of Fiction Records, Chris Perry, while he was in town looking for new house bands. He signed them to the label and their debut album, “Disco Rigido,” followed in 1989. The record took industrial’s harsh electronics and combined it with catchy rhythms, hard rock riffs and hip-hop elements for a sound that crossed genres. Die Warzau’s socially conscious lyrics offered thoughtful yet provocative commentary on racism and sexuality. The singles “I’ve Got to Make Sense” and “Land of the Free” both charted on Billboard, but it was “Welcome to America” that gained the most notoriety with a racy video and unapologetic depiction of sex, violence and drug use as a commentary on American society.

The band continued breaking genre barriers on its 1991 album, “Big Electric Metal Bass Face,” incorporating elements of funk, house and rap into the sound. The success of the album landed them a spot on Nine Inch Nails’ Sin tour that same year. At the end of the trek, the band took an extended break and reemerged in 1994 to record its next album. Leaving Fiction Records, they teamed up with TVT/Wax Trax! to release their third album, “Engine,” in 1995.

Widely considered an essential industrial album, “Engine” redefined the possibilities of  industrial music. The band took the genre to new places with its fusion of industrial, psychedelica, EBM, rock and world music. With its featured singles “Liberated” and “All Good Girls,” it remains Die Warzau’s most popular release. But just as the band was finding success, its members grew frustrated with the industry. Constant label interference and stifled creativity caused them to end the band in 1995. With Die Warzau on hiatus, the founders moved on to other projects. Marcus founded funk group Everplastic, while Christie formed Eco-Hed.

Christie and Marcus reunited in 2002 to work on Eco-Hed’s “Land of the Free” for the Positron! Records compilation “Komposi001.” Recording together again inspired them to resurrect Die Warzau for one final album in 2005, “Convenience.” Die Warzau continued for six more years. The band re-formed in 2013 to play Chicago’s Cold Waves II festival, and in 2015 joined Pop Will Eat Itself to play its first show in New York in over twenty years. This would mark their final performance as Die Warzau.

Die Warzau’s bold nature showed there were few limitations to industrial music. It dared to transform the genre, taking it to unimaginable places and giving it new life. Its refusal to be pigeonholed and ferocious drive left a mark on the scene.