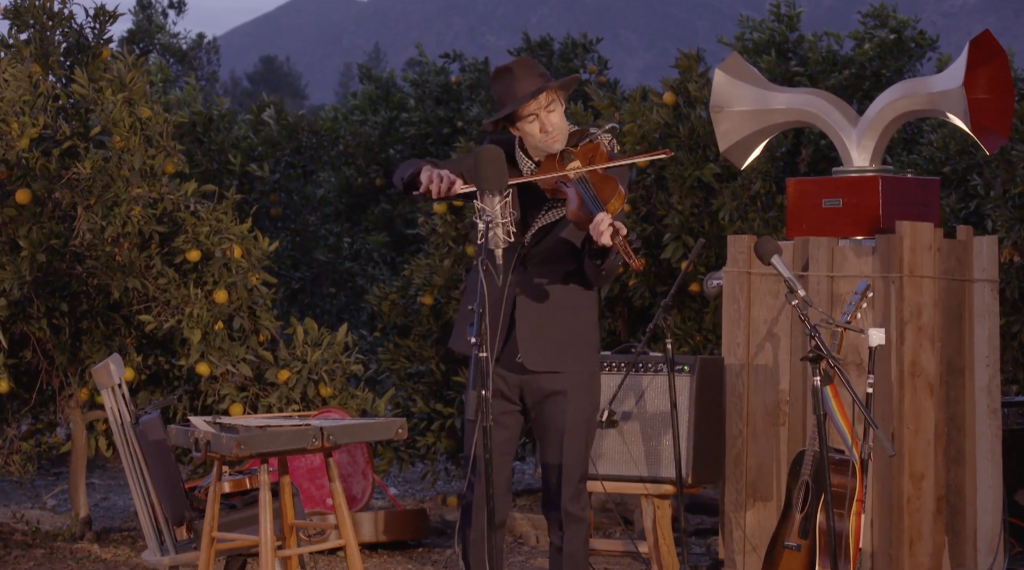 Andrew Bird may be a Chicago expat, but he’s made a point of continuing the holiday concerts he’s performed each year since 2009 at Fourth Presbyterian Church on Michigan Avenue. The singer-songwriter-multi-instrumentalist calls the series “Gezelligheid”—a Dutch term that loosely translates to “cozy”—and the warmth and intimacy of Bird’s sophisticated, often confessional folk-pop seems paradoxically at home in the church’s cathedral-like interior.

This year, of course, is in every way an outlier; and with live performances still on hold since March, it seemed that Bird’s tradition would have to skip a season. But Bird improvised. If he couldn’t perform Gezelligheid under Fourth Presbyterian’s gothic vault, he’d perform it under the vault of heaven itself. And so on December 13, Bird live-streamed a ninety-minute set in an orange grove in Ojai, California. The concert was archived, and is available through the end of December.

It’s worth catching, if only because the intimacy of the camera ratchets up the coziness quotient in a way that brings out Bird’s quiet charm and endearing melancholy. (With his angular face and mutinous crop of hair, Bird is born to sing laments.) The setting itself is gorgeous to the point of vulgarity; those oranges seem more like the Platonic ideal of oranges than quotidian citrus. The whole color-drenched setting seems lifted from a Wes Anderson film, which is entirely suitable, given that more than one critic has pegged Bird as a Wes Anderson of music. When he ambles to the mic, his rail-thin frame clad hat-to-hem in black but for a houndstooth scarf, Bird seems to have deliberately dressed for the part.

Bird’s reluctance to pass on the concert this year is likely driven, at least in part, by the fact that he’s just released a Christmas album, “Hark!”, whose contents are well-represented in this Gezelligheid set, right from the opening tune—Bird’s gliding violin rendition of Vince Guaraldi’s “Skating” (from “A Charlie Brown Christmas”). Also ravishing is his mash-up of “Greensleeves” and the Handsome Family’s “So Much Wine” (which appears on “Hark!” under the title “Greenwine”), in which Bird transforms the centuries-old ballad into a stately caper in waltz time. He also kicks off his encores with a version of “O Holy Night” (also from “Hark!”) comprising just his undulating violin bow and a sweetly whistled accompaniment. You’re forgiven if you find yourself holding your breath.

The album has garnered most attention for Bird’s COVID-inspired yuletide tune, “Christmas in April,” which he performs here (“Oh my love, when will we know / If we can meet under the mistletoe / I’m writing a song about Christmas in April this year / And you know / That’s just kinda messed up”). But Bird references the pandemic elsewhere as well—both indirectly, as in his cover (also from “Hark!”) of “Souvenirs” by John Prine, the Chicago folk legend we lost to the virus this past spring, and more directly, as in his performance of his tune “Scythian Empires,” which he dedicates to healthcare workers.

Like previous Gezelligheid sets, there’s an emphasis on instrumentals, and Bird is breezily masterful at displaying the range of his accomplishments. In addition to both plucking and bowing a standard four-string violin, he also shows off a five-string version built, he’s pleased to tell us, by Skokie craftsman Peter Seman. He also plays the guitar, whistles, and artfully employs digital loops, occasionally layering them into something approaching the majestic. There’s also his strikingly beautiful Janus spinning horn, a rotating two-speaker instrument that provides an uncanny sonic shimmer to the proceedings, while being so entrancing to watch that it almost functions as a co-star.

But Bird’s own irreducible star power is the real attraction. It’s sufficient, in its quiet, self-effacing way, to make even the spectacular palette of the setting sun seem to be no more than a chromatic comment on what he’s singing—as in his song, “Weather Systems” (“Some things you say / Are not for sale / I would hold that we’re / All free agents / Of a substance or scale”). Bird’s voice is a lovely, plaintive instrument that he generally keeps within a certain comfortable range; so that when out of nowhere he ascends to a trilling falsetto, as he does in “Nights Falling” (“Young swallow far from home / Some follow, some run”), the effect is dazzling.

Patter is kept to a minimum—largely because there’s no one there to talk to, although a recording of applause is inserted, sometimes comically awkwardly, between tunes. “It’s a different kind of energy,” Bird pauses to say of livestreaming. “But I do feel you out there… and you know, when you’re onstage, you just want people to lie to you. You know? You just want people to love you. And even the fake crowd noise has some sort of psychological effect.”

At the end of the concert, Bird waves past his nonexistent audience to us at home, and says, “I’ll see you next year in Chicago.” The show may not have been performed in a church; but it concludes, all the same, with a prayer.