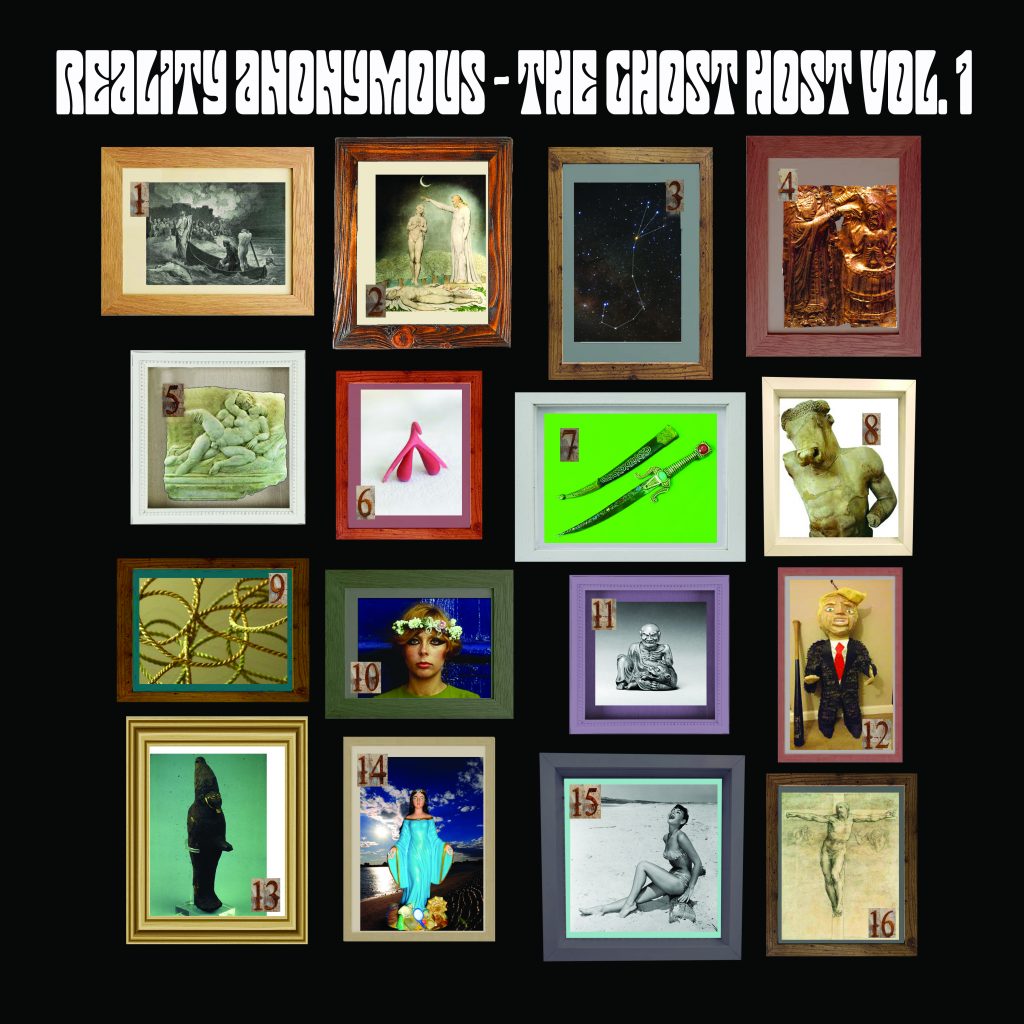 You unlock Volume One of “The Ghost Host” with the key of imagination. Beyond it is another dimension—a dimension of sound, a dimension of sight, a dimension of mind. You’re moving into a land of both shadow and substance, of things and ideas. You’ve just crossed over into Reality Anonymous. With apologies to Rod Serling, who died in 1975 and thus is unavailable to provide comment on this record, I like to think this psychedelic exploration would fit perfectly within “The Twilight Zone.” While I can hear Serling introducing “The Ghost Host, Vol. 1,” it’s impossible to imagine it in old-school black-and-white; this music can only be imagined in brilliant, not-so-secret colors.

Given the cinematic ambience and descriptive imagery on the album, it’s no surprise that Lyn Vaus is a veteran screenwriter and occasional actor. His previous musical output as a member of Boston’s post-punk outfit Carnal Garage, includes the song “State Of Shock,” which was featured in 1992’s science-fiction movie “The Lawnmower Man.” After the door closed on Carnal Garage, Vaus moved to Los Angeles, worked at a film production company, then worked in L.A. and Boston, with film credits including writing and directing the biographical documentary, “Siegfried and Roy”(1999), acting in Brad Anderson ‘s “The Darien Gap”(1996), co-writing Anderson’s “Next Stop Wonderland”(1998) and acting in “Temptation”(2003) with Annette O’Toole and Elisabeth Moss. That film rekindled his interest in playing music, and he began writing the psychedelic songs that appeared on his first solo record, 2010’s “The Floating Celebration,” which was recorded in Washington D.C. with musician-producer-Night World label head Philip Stevenson.

Vaus calls Chicago home now, and Reality Anonymous, his latest vehicle, is credited as a band—with Stevenson again producing as well as providing bass and other instrumentation, Blase Settecase on drums and percussion and Vaus writing the songs, singing and playing guitar. His occasionally off-key vocals are never so off-putting that their charms are offset by the stellar lyrical material, and the rich layers of instrumentation and throwback sounds transport us to a groovy sixties cellar, with an off-kilter, pre-leather trousers Jim Morrison at the mic. Given that Morrison died at twenty-seven and Vaus is years past that cursed age, it’s a compliment to hear a young Lizard King, and not a bloated Komodo dragon, in his vocals.

Vaus has cited The Doors as an inspiration, along with Love and The Music Machine, and I can hear a healthy dose of the mellower early Pink Floyd coursing throughout these sixteen sonic slices of psychedelic superness. 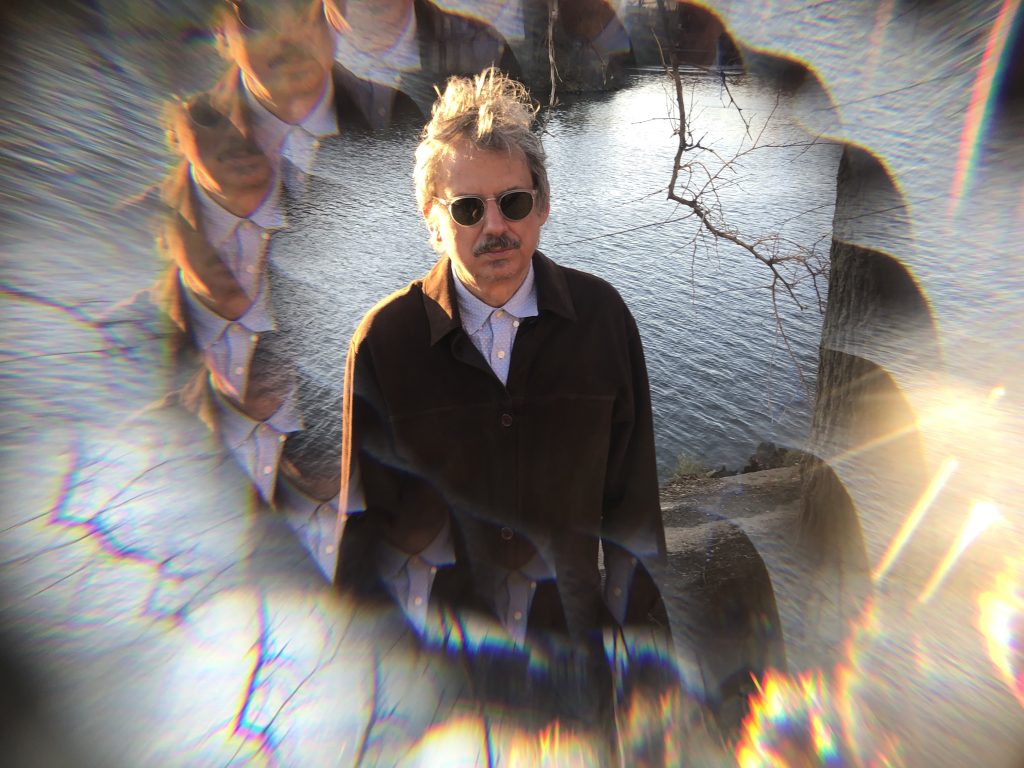 While I’m not normally an advocate of judging a record by its cover, it would be a fun experiment to have someone listen to each song tabula rasa, accompanied by only the sixteen pictures featured on the cover art. Perhaps the most literal connections are found with “Orange Explosion,” which features a picture of a Donald Trump piñata juxtaposed with a baseball bat, making its subject matter crystal-clear, and “Happy Moments,” on which he rhymes that “water spreads cerulean” and “she’s bronzed like cinnamon,” pondering on the choruses “what a long, strange trip” it’s been (bringing up The Dead), accompanied by a brunette bathing beauty in a bikini on a beach in black and white. The other photos, paintings and artworks are on a gradient of literalness related to their track number, a few highly abstract (rope is pictured while Vaus sings “a rope is tied to your Lyric Bride”) and a number that relates to sexuality in detailed if historical-artistic fashion. There’s religious iconography at work as well, including a depiction of Jesus’ crucifixion juxtaposed with the closer “The Rest In Peace,” and the creation of Eve accompanying the first single, “I Love Her Everywhere.”

Vaus told antiMusic that the singel was written for and dedicated to his wife, Kim, and he credits Alexx Magic (Alex Rowney) of Soft Candy for adding keyboards “that really helped elevate and capture the vibe I was going after.” The kaleidoscopic flower-power homage to San Francisco psychedelia and free love in the accompanying music video make clear the headspace that Reality Anonymous are attempting to create on “The Ghost Host, Vol. 1,” and it’s an enjoyable trip across the extensive catalogue of cuts.

In addition to Alexx Magic, the album features contributions from Rob Myers of Thievery Corporation, Kenthany Redmond, known for his Infrared Quintet and Beau Barry of his namesake trio. Basic tracks were cut with Blase Settecase at Mystery Street Studios in sessions overseen by Joe Tessone, mixed by producer Stevenson at Rat City in Chicago and mastered by Bob Olhsson in Nashville.

But it’s clear that Vaus is the proverbial brainchild, writing, singing and playing guitar. And while his collaborators add a delightful depth to the sound, if the songs weren’t stellar, the exercise would fall flat. Thankfully, just as Vaus is a gifted screenwriter, he’s also writing songs that create pictures in the mind just as eloquently. I can only hope that Volume Two of “The Ghost Host” will be a similarly enjoyable journey through his particular dimension of time and space.