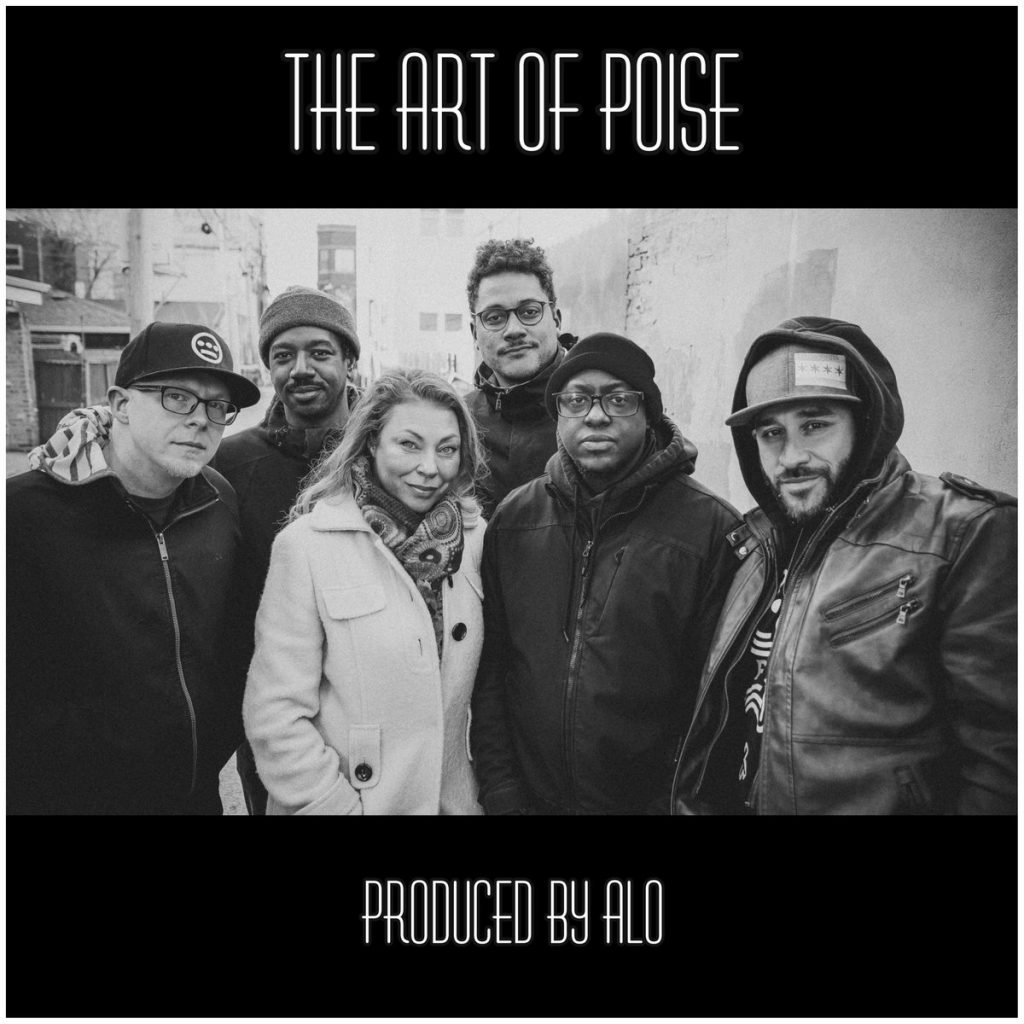 Greenlights Music is a Chicago hip-hop collective of eight or nine vocalists and emcees formed by RP (Andrés Roldan), formerly of Abstract Giants. Billed as a collaboration with Alo, the owner/producer of Garden Music, their new record, “The Art of Poise” also includes fellow Abstract Giants alumnus Abitight, CasaGrown and Amanu of BADWOLFF, Introspect (of California, whose brother, Sammy Faze was featured on their last release), Phonetics (of Scribble Jam fame) and soul singer Willow Wells; additionally, emcee/comic Bob Rok guests on three songs. With this many cooks in the kitchen, comparisons to Wu-Tang Clan would be natural, but the seamless way the various parties spit their bars into one coherent tapestry creates a sound more reminiscent of Doomtree or their subset Shredders (delivery-wise) and Dilated Peoples (sonically). This seamlessness and bent toward anonymity in terms of recording credits may relate to the members of Greenlights Music being friends for over fifteen years.

The group defines its goals as to be “open, forward, and positive” and describes itself as “community oriented,” which it says it preaches in its lyrics. In contrast to its previous record, 2020’s “Space Craft,” a concept album which imagined then-President Trump as the captain of a spaceship lost in space, “The Art of Poise,” released in January, is a more typical album. It features a suite of strong songs on various topics, but there are some recurrent themes. While this is not a “concept record,” it is a product of its time, so there are references throughout to the COVID-19 pandemic and the lockdown, Proud Boys (“Year Of The Murder Bee”), Black Lives Matter, fascists running the government (“Strange Fruit”), the need for police reform (“Thin Blue Line,” a particularly claustrophobic commentary) and race relations in general (“Sum of a Struggle”). The lines and rhymes are so dense, it’s hard to parse the language on even one composition, and that’s to the ensemble’s credit.

Head-bopping moments boasting stone-cold grooves include the rapid-fire “Brothers In The Cut” and the crunching and spitting opener, “Lazer Tag Vibe,” which includes the well-fitting gauntlet thrown: “You can’t even absorb the rhymes I record.” “Peligro,” translated from Spanish as danger, is one of five tracks on “The Art Of Poise” featuring verses by Alo and overflows with dope flow.

“Self-Care,” one of the tracks featuring Bob Rok, begins with a recorded snippet of an interviewer that sounds all the world like this writer in his whiteness and stumblingness and is punctuated with a bass solo resurrected from the grave of “Bela Lugosi’s Dead.” The content matches the gothic minimalism of the music and lightens the darkness a tad with Wells singing a siren song encouraging the rappers to “make sure that you’re taking care of you.”

Willow Wells provides musical depth and great range throughout, but her voice is best used on the ear worm “Chivalry Is Dead” and the closer “I’ll Never Make It,” providing a soulful counterpoint to the rap and R&B setting and the infectious boom-bap rhythm.

RP raps that he’s “here to dominate,” and throughout these lucky thirteen cuts, the proof is in this thick rap tapioca, beaten smooth (but still tastefully crunchy) by Alo’s beats. While RP has historically been the Greenlights Music’s main producer (after helming Abstract Giants from 2002 to 2012, the present posse began in 2015 when he started working on some of his own material with Casagrown and Willow Wells), he and the group were happy to yield the beats to Alo on “The Art Of Poise.”

The group says that “we linked with Alo to do production, partly because he was an old-time friend/bandmate with Willow and of course because he is a genius beatmaker/emcee. RP wanted to do something new musically and have the crew rap over Alo’s legendary beats. He obliged. We were honored. Something clicked and ‘The Art of Poise’ became our favorite project to date”—high praise for something that was originally planned as a modest, short-form EP, but that evolved into something like a hip-hop symphony.

While “Back To U And Me” and “Chivalry Is Dead” might veer toward the pop side too much for my comfort, truth be told, there’s not a duff cut here, and like the best albums, “The Art of Poise” deserves to be heard end to end, and on repeat.

When Greenlights Music performs live, its members don’t feel like eight or nine is enough, so they add Andre Lempera on drums, Joe Goodkin on guitar and Jake Samson on bass. That might seem academic since they haven’t been able to play live since the pandemic developed, but after releasing their last album in July 2020 and “The Art of Poise” this January, they have plans for a new release incorporating their band members this summer. Clearly, they are not stopping for red or yielding for a cautious yellow; all Greenlights Music sees are green lights, and it is all focused on where to go next. If its next record is as good as this one, that will be quite an accomplishment.

“The Art of Poise” is available for download on Greenlights Music’s Bandcamp page.