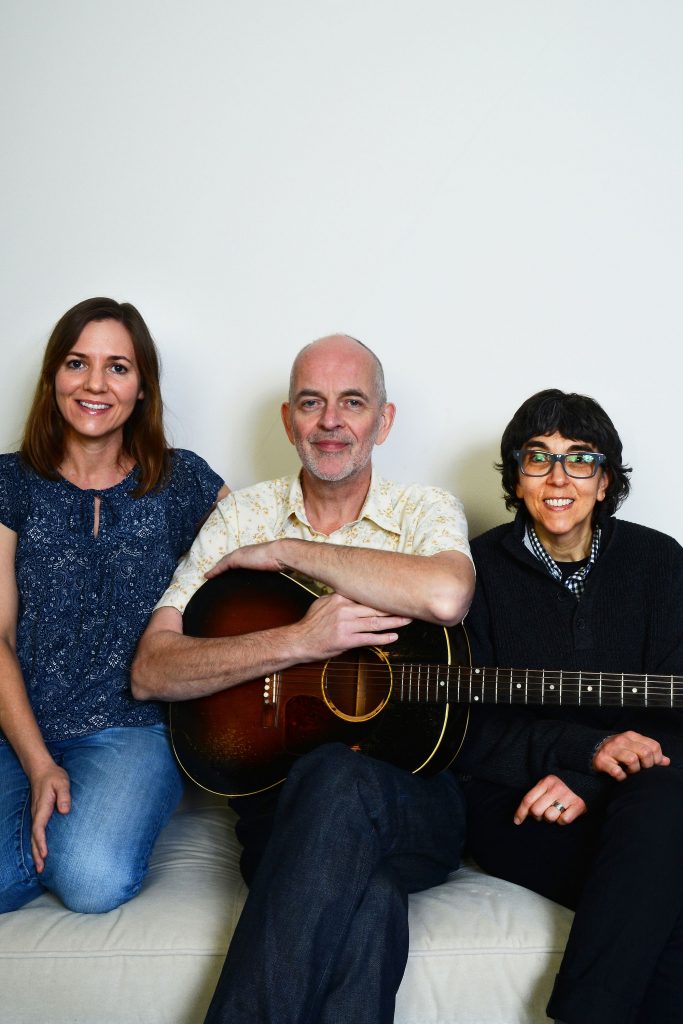 Sunshine Boys are here to bring a ray of sunshine to your ears. The trio, composed of Dag Juhlin on lead vocals and guitar, Freda Love Smith on drums and Jackie Schimmel on bass, released “Work and Love,” a stellar sophomore record in 2020 on legendary local label Pravda. This month, the album is scheduled to get its long-deferred record-release show—perhaps the first such show to also celebrate a record’s first anniversary.

While Sunshine Boys is relatively new as an enterprise (their similarly excellent debut “Blue Music” was released in 2018, also via Pravda), their members have been around for much longer, not to say forever. Juhlin was running around Galesburg’s Knox College campus with his electric guitar, playing the café there on an early morning Flunk Day in the early 1990s as a member of power punks The Slugs. He was playing guitar on the night Lincoln Park’s Lounge Ax closed in January 2000, and while he’s also in Sonic45 (with baseball broadcaster Len Kasper) and “freewheeling” cover band Expo’76, his most high-profile gig has been as a member of Poi Dog Pondering. Juhlin is also a radio veteran, most recently working with Steve Dahl, and currently hosts “The Sunday Night Club” on Huntley Community Radio, WHRU-LP, 101.5 FM.

Drummer Freda Love Smith was part of a trio that formed in 1986, Blake Babies (named by Allen Ginsberg) featuring Juliana Hatfield and John Strohm. Hatfield embarked on a solo career later and Strohm and Love Smith formed Antenna, and she’s subsequently collaborated with Hatfield in Some Girls (with Heidi Gluck). Although Blake Babies broke up in the early 1990s, they’ve reunited off and on (in 1999 and 2016). She’s also been in the band Mysteries of Life and is the author of “Red Velvet Underground,” a memoir and cookbook published in 2015. Naturally, classes she teaches now at Northwestern in her position as a lecturer and advisor involve writing about food.

Bassist Jackie Schimmel was in Brad Elvis’ Big Hello and plays with Roberts’ band, Justin Roberts & The Not Ready For Naptime Players (it’s a kid’s band). She’s also bassist for Tiny Bit of Giant’s Blood, a “glam-punk heavy-rock product” from Tony Rogers and John Scholvin of The Good. Schimmel also happens to be a Director of Conflicts, a fancy title for a lawyer.

More important than Sunshine Boys’ collective CV is the music they make, and it’s solid, poppy rock that never rocks too hard or too soft. It’s never too alien to not be groovy and never too familiar to sound like received wisdom.

Sunshine Boys songs fit into three pockets: contemplations on life, advice on life and ominous warnings about life. Their songs are rooted in love, but aren’t love songs, and they perform songs that should inspire change but aren’t protest songs. That’s not to say those themes don’t arise, but they’re framed in such oblique terms that they don’t stab you in the eye with the heart on the sleeve.

While “Blue Music” seemed to be a bunch of mostly successful attempts to find their way, “Work and Love” is a more confident and consistent version of Sunshine Boys, although they are without question the same band. The record leads off with a de rigueur song of inspiration and motivation (to quote Michael Stipe of R.E.M.) “I Was Already Gone” and follows with the single “Infinity Girl,” which echoes The Dukes of Stratosphear, XTC’s psychedelic alter ego, whereas “Blue Music”’s “Caroline Yes” had channeled those U.K. post-punks’ original incarnation. “Don’t Keep It Inside” is reminiscent of a highlight from the previous record, “Save It For A Windy Day,” another song of inspiration and motivation, both of which espouse the theme of releasing your frustrations and worries and changing them from internal problems to external opportunities.

There’s another recurrent theme on “Work and Love” only hinted at on the debut, and that’s pushing the pedals on cycles, seasonal, circadian and otherwise. Juhlin’s soaring tenor propels a slideshow of childhood and growing-up reminiscences on the kickoff cut, “I Was Already Gone,” including numerous snapshots of summer, “Summertime Kids” reintroduces the stutter-step nostalgia of Smashing Pumpkins’ “1979” and the seemingly limitless possibilities of summer, to wit, “there’s nothing we can’t do.” The female backing vocals reflect highlights from The Lemonheads’ apex, “It’s A Shame About Ray,” fitting, given that that band’s Evan Dando was an early Blake Babies member and his female foil on those cuts was none other than Juliana Hatfield.

“If you feel dizzy and down, if you’re now lost where you once were found” it’s just “The World Turning Round,” Sunshine Boys sing, and they celebrate “the remains of the day dissolving away,” becoming their most R.E.M.-like, on “Moonrise” which could be a lost outtake from “Murmur” or “Lifes Rich Pageant.”

“The critical lie is starting to sting,” Juhlin sings on the cautionary “The Serpent In Spring,” in a more oblique commentary as compared to “Schoolyard Bully,” and he continues that “the fall line divides the common ground, it’s just the same as the blame goes round and round.” He underscores the changing seasons by singing that “August is freezing, December is warm, if you wanna speak out, you gotta fill out a form, meet the new norm, where suspicion is king, the lion in winter, the serpent in spring.” The song concludes with the thought that “This is the golden age of the meaningless word, and all the hatred gets so lovingly stirred, blurred to a boil, as reason takes wing, the lion in winter and the serpent in spring,” the chorus repeats and the rat-tat-tat rhythm stops with a vigorous yet uneasy lurch.

There’s talk of “winter waves” that “roll away” and “dreaming of a distant daughter running into your arms on a summer day” on the ascending “Every Step,” and in “In Between Time” Juhlin greets someone with a “rained-on heart” that brings in “heavy air” with them, about whom he says feels “like a wandering cloud in search of connection.” Just when you think Sunshine Boys had hit their quota for songs of inspiration and motivation, they land two more with winning aplomb.

Another unsung “song you’ll be closing with tonight” on “Work and Love” is “Right Where You Need It,” set in the “Indian summer sun,” as “another highway’s flying by… giving it the old college try.” It’s clearly a song about being in a touring band, and Juhlin is arguing to hang onto these memories, and as he repeats the chorus, challenging the listener to “keep it right where you need it,” the rays of that “Indian summer sun” are reflected in the backing vocals, baking in a Beach Boys vibe, with strings attached.

Sunshine Boys’ record-release show for “Work and Love” is scheduled for March 26 at Evanston SPACE, 1245 Chicago Avenue; it’s an all-ages show.  UPDATE: The show has been canceled.