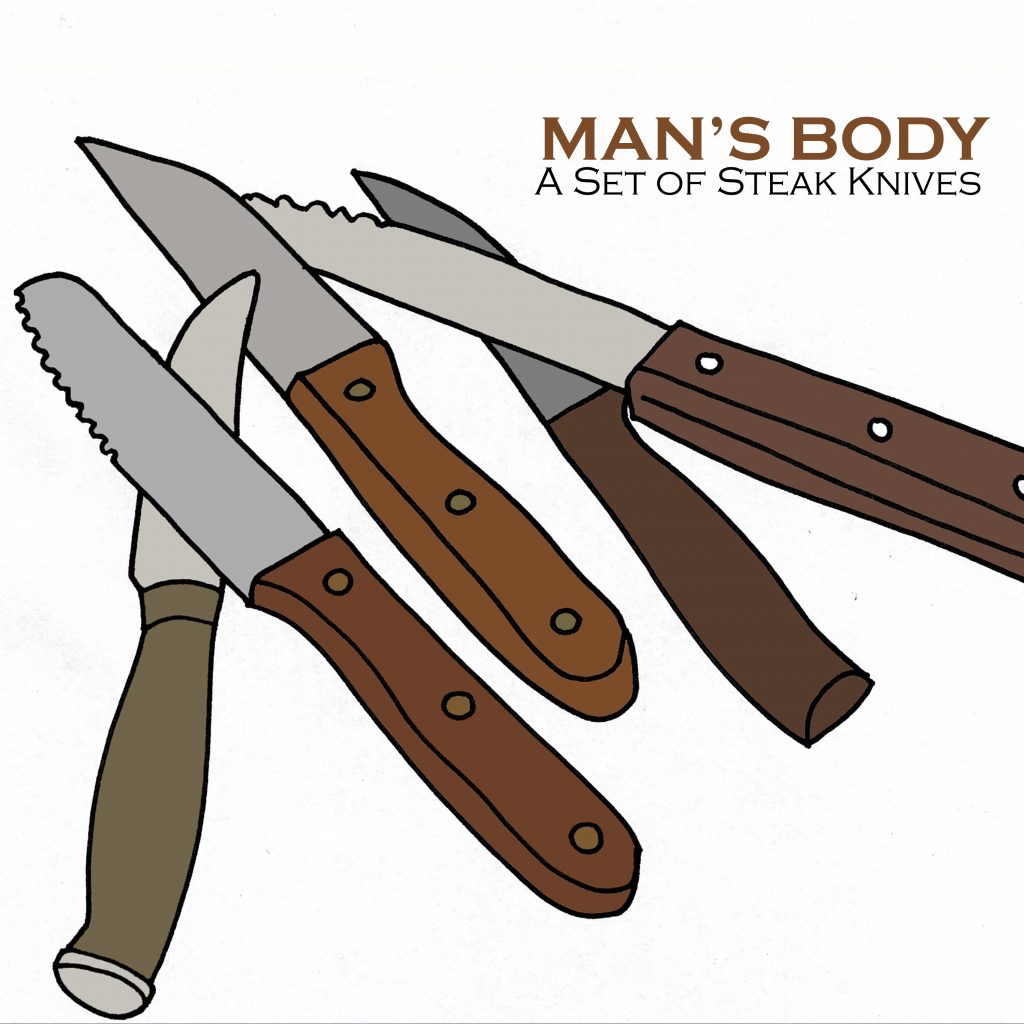 It’s a fun listen, a record obviously influenced by college rockers R.E.M. (Niimi wrote the book in the “33-1/3” series on that band’s finest hour, “Murmur”) and SoCal post-punks Minutemen, who Franco cites as an inspiration. The album’s title and the cut “Hit The Bricks” were inspired by a memorable quote from the David Mamet play and film, “Glengarry Glen Ross” [“First prize is a Cadillac. Second prize, a set of steak knives. Third prize, hit the bricks!”] and the hardscrabble workmanlike approach to the group’s music reflects that “take it or leave it” ethos.

Vocalist Franco was born in Hollywood and at sixteen started The Blasphemous Yellow with his stepbrother. His next band was Ferdinand, beginning in 1994 and ending in 2004 when he quit to make a record in New Zealand with David Kilgour and Robert Scott of The Clean. Upon his return to the states, he formed Rough Church and has since released eight records with that band on his own label, Beautiful Workhorse Recordings, and on Kiwi label Powertool.

Niimi (guitars, vocals, organ), in addition to being a writer on rock and pop music—aside from the 2005 book, he has written for the Reader, SPIN, City Pages [Minneapolis], SF Weekly, Seattle Weekly, Village Voice, Dusted, Dallas Observer, Houston Press, TimeOut Chicago, eMusic.com, Perfect Sound Forever, OC Weekly, St. Louis Riverfront Times, and the New Zealand Listener—works as a guitar repair tech full-time. His other band, Ashtray Boy, recently celebrated its twentieth year; their tenth and most recent album was “Painted With the Mouth,” released on Minty Fresh in 2015. As if the L.A. to Chicago distance for Man’s Body wasn’t enough, Ashtray Boy is a transcontinental enterprise—founder and leader Randall Lee, formerly of Cannanes, lives in his native Melbourne, Australia.

Marco Obaya (guitars, vocals) is the youngest of the three, but as a musician, his work covers a wide span from drums to vocals, metal to jazz, and his day job is a recording engineer. His punk rock band The Remedies released their debut in 2015 and their third album is due to drop soon, with a tour of the U.S.A. planned to follow. 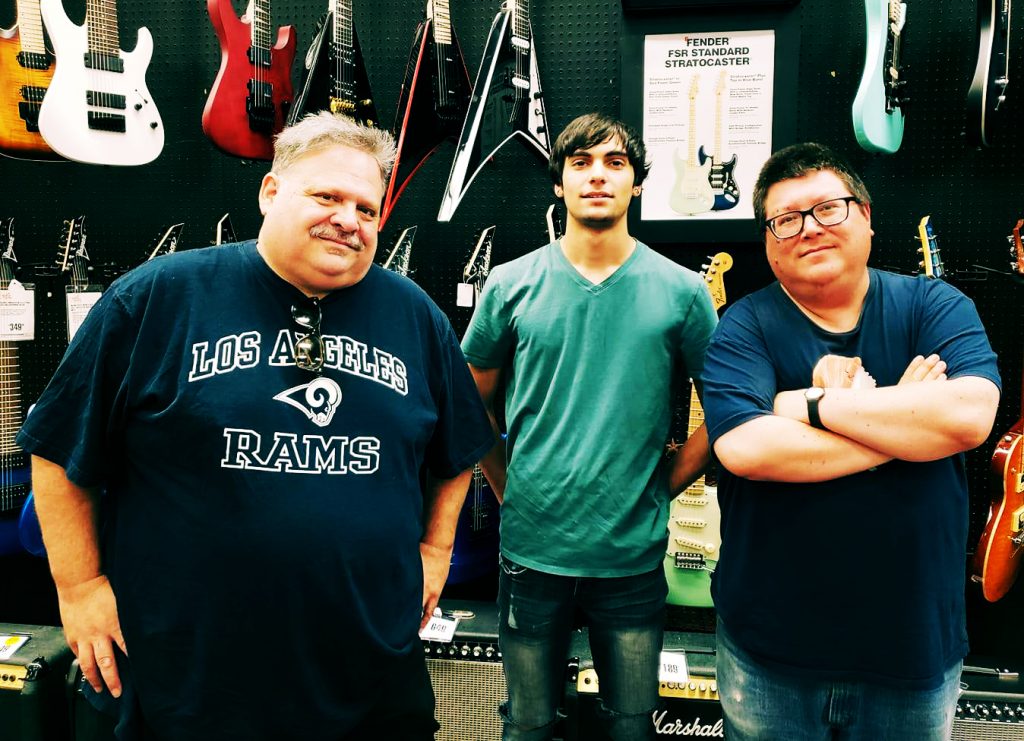 “A Set Of Steak Knives” kicks off with two singles, both Greg Franco collaborations with Dante Pascuzzo, who contributes guitars, bass and synthesizer, and Kaitlin Wolfberg (violin, vocals, synth and theremin), “Contact Sigh” and “40 OZ. Kid.” Although written before the present pandemic, “Contact Sigh” synthesizes the wistful need to be close to those who one wishes would “stay close to my heart” and “40 OZ. Kid” waxes reminiscent about an emcee trying to make it good despite drinking at 10am while being jobless. Both cuts walk a high wire between The Lemonheads’ Juliana Hatfield collaborations (circa “It’s A Shame About Ray”) and the eighties’ synth-pop inclinations of Weezer side project The Rentals.

“The Natural Host,” follows, an anthemic and multi-layered rocker, about what, I’m not sure; either the host is communion or the place a parasite lays its head, but it culminates in a lovely string-laden climax. “I had friends, I had sponsors, I had shrinks, I need a handler,” Niimi’s “Handler” begins at the outset of the pulsating punk number, and the blazing guitars and thick bass undergirding propel the song into an incendiary guitar solo and a sizzling end. There are a lot of humorous moments on “A Set Of Steak Knives,” and this one, told from the perspective of an aging rock star who is clearly at wit’s end, is one of the highlights.

“Pound the pavement, or Hit the Bricks!” Man’s Body orders on the next track, and if the vocals are bracing, the passion is well met with the vigorous piano work of Marc Doten (who also contributes bass). Franco wants to know “Who got the number of that truck?” on “Bed of Nails (Trying),” a shaggy-dog story that is one of the few cuts that exceeds the five-minute mark. “I gotta push through, I got so much work to do,” he sings on the verses. Even if Man’s Body aren’t necessarily breaking new ground, I’m sure there’s never been a recorded locus of Rockwell (“Somebody’s Watching Me”), Ray Parker Jr. (“Ghostbusters Theme”) and Suicidal Tendencies (“Institutionalized”).

Niimi’s “Last Day On Earth” begins Side B of “A Set Of Steak Knives” by slowing down the tempo and shifting the pitch to an extent the song veers toward a country feedback ballad, whereas the next cut, “Blue Ruin” might be the most R.E.M.-like moment here. There’s lovely jangly guitar interplay and then a spoken-word, echo-laden diatribe (a much more laid-back “Institutionalized” or a much more discernible “9-9” from R.E.M.)—it’s the least emblematic song on the record, yet carries much to recommend.

The loveliest and perhaps least punk moment is the string- and horn-laden “Classically Mine,” which could for all the world be a lost single from Electric Light Orchestra or a wet dream from Belle and Sebastian founder Stuart Murdoch. The strings sing, the horns punctuate, the love blossoms—it’s just that good.

“Shower and a Cigarette,” a gritty, bass-heavy meditation that channels the guitar approach of Sonic Youth is a Franco-Pascuzzo collaboration, concluding with the line, “Death is just a whisper away.” Speaking of killer bass lines, they don’t come much more dead to rights than on the irreverently cool and humorous closer, “I Left the Set of My Own TV Show,” which effectively out-Pavements Pavement yet rides a stone-cold eighties synth groove at the same time.

Given that the trio lacks a drummer, in terms of formal membership, you can hear drums and percussion provided on “A Set Of Steak Knives” by Derek Crawford, Gerald Dowd and Fredo Ortiz, who adds vocals. Vocals and bass are contributed by Jeff McElroy, mandolin is supplied via Gordon Bash, and trumpet, French horn, flugelhorn and trombone all come courtesy of Probyn Gregory. So if it sounds like Man’s Body are more than just a stripped-down trio on “A Set Of Steak Knives,” it’s not just your imagination.

If it sounds like Man’s Body are trying to be all things to all people at times, you might not be wrong. But rather than trying, I get the impression that they just are. If you “peel slowly and see,” as they sing on “Hit The Bricks” (a Velvet Underground reference) you’ll uncover that they really are just bananas underneath, they’re not trying, they are really what you hear and what you’ll get. For the record, I would love to see dancing about architecture. I just hope that Man’s Body will be there to provide the music.

Your next opportunity to discover Man’s Body live will be at Montrose Saloon on September 11.