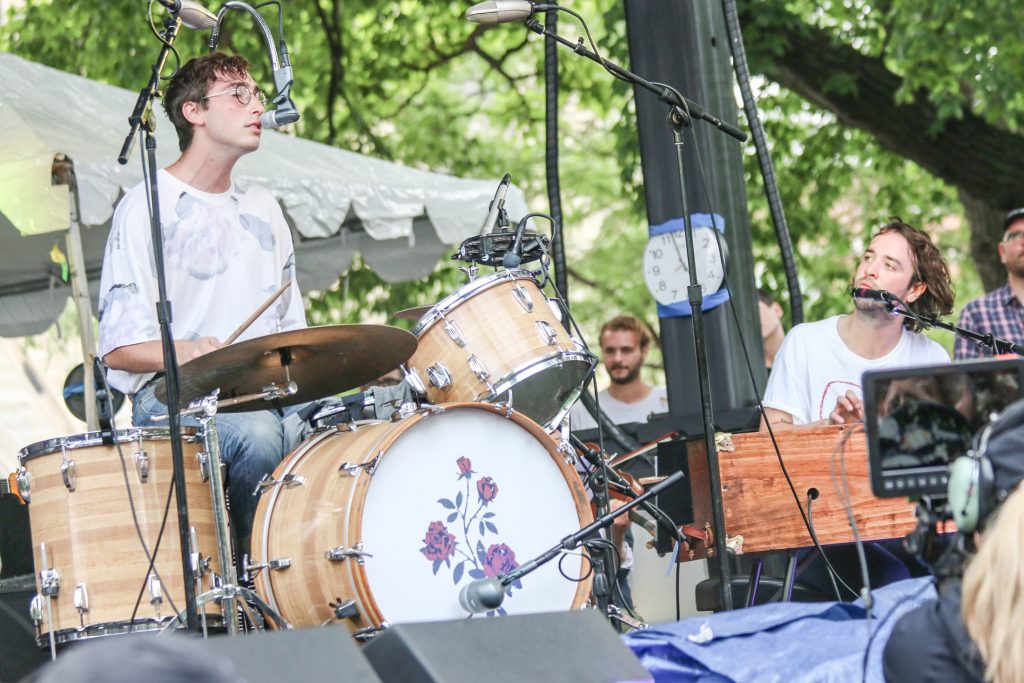 Right or wrong, Chicago’s music festival season returns with a vengeance at the end of July with Lollapalooza. And although barely five percent of the 165 acts on the bill are local, they are worth spotlighting, especially if you want to show the musical tourists flocking to the City of Big Shoulders where to invest their time and energy and dollars. While the Pitchfork Music Festival and Riot Fest (both scheduled for September this year) have significantly smaller lineups, they have a much higher local music contribution, almost seventeen percent for Pitchfork and twelve percent for Riot Fest, which makes sense, given that Lollapalooza likes having Chicago host as a matter of convenience, tradition and, a big plus, economics, whereas the other organizers have stronger local roots and ties. But that’s another story. In the event you’re going to Lollapalooza, and one hopes, not a viral Spreadapalooza, here, in alphabetical order, are the local artists to hear and see.

DRAMA
It’s usually best to avoid drama, especially with a capital ‘D,’ and MOST ESPECIALLY when it’s in all caps, as is the case with this Chicago electronic dance duo. But if you’re looking for a mellow, atmospheric groove and danceable beat, I wouldn’t avoid this DRAMA. Producer Na’el Shehade (who’s worked with hip-hop talents including Chance The Rapper, Kanye West, Chief Keef, Vic Mensa) and vocalist-songwriter Via Rosa (born Lluvia Rosa Vela, formerly of Chicago hi-hop collective THEMPeople) were introduced to each other in 2013 by Jean Deaux, and although their partnership began informally, they released EPs in 2016 and 2018, and their full-length debut, “Dance Without Me,” via Ghostly International in 2020. Shehade, who grew up immersed in the Chicago house scene, cites producers Pharrell, Timberland and Jon Brion as influences, whereas Rosa, whose parents played in a reggae band, claims inspiration from disparate sources like ska, Billie Holiday, Sade, Stevie Nicks, Toni Braxton and Kurt Cobain. Listening to DRAMA is an experience all its own, but it’s easy to also hear trip-hop sounds drip through, with echoes of Tricky, Massive Attack and Portishead rippling into their estuarine mishmash.

Serena Isioma
Assuming Lollapalooza won’t book The Linda Lindas at the last minute, twenty-year-old Isioma is the likely youngest artist on the lineup; she’s definitely the youngest Chicagoan. In January the first-generation Nigerian American singer-songwriter was included in The Shazam Predictions 2021 playlist, based largely on her second EP, 2020’s “The Leo Sun Sets,” and is working on her full-length debut. She lays a bleeding heart bare on tracks like “Why Am I So Toxic,” “Blue Sky,” “King” and “Stop Calling The Police On Me.” Comparatively, the single “Meadows In Japan,” in which she breaks up with her partner at the end, seems downright laidback. That’s the dissonant space Isioma occupies: lovely, smooth tunes about devastating heartbreak and being a victim of racism and classism.

Mick Jenkins
Of all the Chicagoans in the lineup, I’ve listened to this hip-hop up-and-comer the most over the past seven years, since his breakthrough projects “The Water[s]” and “The Wave[s]” were released in 2014 and 2015. It warms my heart to see him make it big. Jenkins has come a long way since collaborating with Pivot Gang’s Saba on “Heaux” in 2012, and Chance The Rapper and Vic Mensa on the single “Crossroads” in 2013, and he’s also become a member of the collective Free Nation, the other members of which include Prop, J-Stock, Burman and Maine The Saint. It’s not just his six-foot-five height that towers over his fellow Chicago rappers; he’s got mad talent and dope flow, and it stems from his authoritative baritone and intelligent lyrics that focus on personal growth and finding his place in the world, as opposed to that obsession that still infects so much hip-hop: bragging about wealth and women. Across two full-lengths and multiple EPs since 2016, most recently 2020’s “The Circus” (Cinematic Music Group), Jenkins, who got married last year and just turned thirty, shows  remarkable maturation without losing his patented intensity.

Neal Francis
Neal Francis O’Hara was a piano prodigy who toured Europe at age eighteen with Muddy Waters’ son and backed up other prominent blues artists coast-to-coast. In 2012, he joined popular instrumental funk band The Heard and later assumed the creative helm; but by 2015 he had been fired from his band, evicted from his apartment, and was close to self-destruction. An alcohol-induced seizure that year led to a broken femur, dislocated arm, and finally the realization that he needed to get clean (according to his press materials). Francis worked with bassist Mike Starr (The Heard) and drummer PJ Howard (The Revivalists, The Heard) to help get his songs together and connected with producer Sergio Rios (Cee Lo Green, Alicia Keys) to record the initial batch of songs for what would become his first solo full-length at Killion Sound in Los Angeles. “Changes” was released in 2020 by Ohio-based Karma Chief, an imprint of soul revival label Colemine, and it’s a solid set of songs that successfully locate the intersection of Chicago blues and New Orleans R&B, channeling inspirations like Allen Toussaint and Leon Russell. Francis pledges to tour relentlessly to promote his own music, going on record to say that “I’m doing this to fulfill a drive within myself, but also to pay tribute to the gifts I’ve been given. And it comes from a place of immense gratitude.”

Nez
Nesbitt “Nez” Wesonga has become such an establishment in Chicago house music in the past ten years that the opening cut on his new three track EP, “Midnight Music” is a collaboration with Felix Da Housecat. The appropriately named “Lift Off” kicks off with typical bumping electronic beats and introduces a riveting electro-clash rhythm as it bounces abruptly to a close. “My Love” bubbles under in a sinister, cymbal accented synthesis that culminates in a dance floor soaked in sweat, whereas the concluding cut, “To The Money,” featuring female vocals (and whistles!) from Flo Milli and 8AE, is a maelstrom of instrumental denseness propelled by a propulsive beat that refuses to quit. As if Grant Park in mid-summer could be hotter and sweatier, Nez is here to make sure you’re drenched in even more hotness and sweatiness.

Polo G
Taurus Tremani Bartlett, now known as Polo G, comes from Chicago’s Old Town Marshall Field Garden Apartments with quick-draw rhymes and dense instrumentation. The rapper’s full-length debut, 2019’s “Die a Legend” peaked at number six on the Billboard 200 and went platinum, and 2020’s “THE GOAT” hit number two and charted ten singles, including “Rapstar,” which debuted at number one. In May he dropped the single “Gang Gang” with Lil Wayne and released his third studio album, “Hall Of Fame” on June 11. While he’s not reinventing hip-hop, his compelling flow and sing-song delivery begs for head-bobbing, and if you listen past his liberal use of obscenities and that word, there’s creativity in his autobiographical descriptions and musical underpinnings.

Rookie
Rookie might be Chicago’s best answer to classic rock since Cooler By The Lake, but given its allegiance to the alt-country label Bloodshot, the band would surely prefer to be categorized as roots rock. But a close listen finds the sound at the nexus of late 1970s crunchy power pop and early 1980s so-called new wave. If you can imagine The Knack’s “My Sharona” merged with The Cars’ “Dying In Stereo,” you’ll know what to expect from their song “Hold On Tight.” “Sunglasses” channels The Eagles with pedal steel aplenty, yet the choice to cover “Head Over Heels” by Tears For Fears reveals the band’s allegiance to the eighties. As if to dare you to categorize them, all six of these dudes perform in jumpsuits.

Whitney
Saturday Night Live alums Fred Armisen and Bill Hader collaborated to create “Documentary Now” for IFC, and one of their most hilarious and on-the-nose parodies was of 1970s yacht-rock legends The Blue Jean Committee. The ensemble came replete with songs celebrating the “Catalina Breeze” and were adorned with long hair, mustaches and, naturally, lots of blue denim. When listening to Whitney, I get the sense that if you asked them if this parody poked close to the bone, they would see it as homage and argue that this mid-seventies sound is what they are aiming for. If you imagine what The Brothers Gibb might have sounded like in the 1970s if they had never discovered disco, you’ve nailed the sound of Whitney. Formed by guitarist Max Kakacek and drummer Julien Ehrlich after their previous band, Smith Westerns, broke up in 2014, Whitney’s debut album, “Light Upon the Lake,” was released in June 2016, and their 2019 follow-up, “Forever Turned Around,” was recorded partially at Prairie Sun Recording Studios, a former chicken ranch in California’s Sonoma wine country. If Whitney doesn’t serenade the Lollapalooza faithful from a yacht anchored off Grant Park, I’ll be disappointed. Alternately, we can hope for a lake breeze to provide some mist of surf to soak Whitney’s fans as they bask in their mellow, soft-rock sounds.