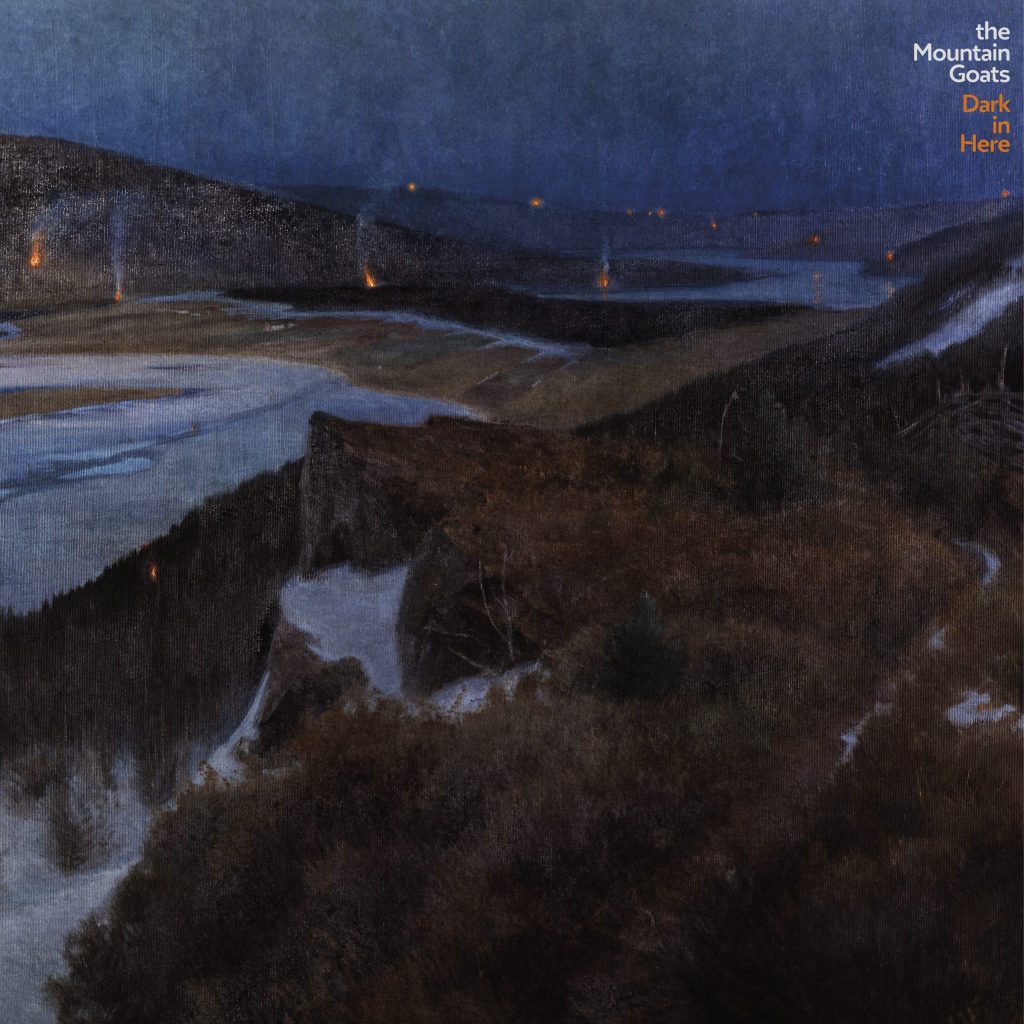 Of all John Darnielle’s album titles, “Dark In Here” might be the best description of his mindset yet, and that’s saying something. On his twentieth-something record as The Mountain Goats since 1994, Darnielle embraces the darkness lyrically and thematically, yet the music is anything but dark.

Throughout these dozen tracks Darnielle mines the coal-black vein of his perennial obsessions: science-fiction, horror, the occult, religion (angels and demons) and heavy metal music, but in jaunty, jazzy fashion. So it seems like Darnielle—who started as The Mountain Goats just buzz-sawing across his acoustic guitar into a basement boombox and shouting into a thrift store microphone like a punk rock frontman untethered from his bandmates—has matured musically, while mining the same rich vein of darkness that characterized his early gothic themes.

The album begins with the breathless one-two punch of “Parisian Enclave,” which paints a picture of rats nesting in the catacombs under the City Of Lights in under ninety seconds, and the rocking cut, “The Destruction of the Kola Superdeep Borehole Tower,” inspired by an abandoned Soviet-era mission to bore the deepest hole in the earth’s crust, and the derelict station left behind since the early 1990s. The single “Mobile” follows, and at this point it’s a welcome moment of mellowness, a leisurely, almost Adult Contemporary ballad that places Darnielle on a balcony on the Alabama Gulf, imagining himself as Jonah, awaiting instructions or a gesture from God, expecting a great gust to blow him into the mouth of the Gulf and into a fish’s mouth.

“It’s high noon somewhere, it’s dark in here,” Darnielle sings on the title cut in his trademark adenoidal tenor. While the music on this one is of a piece with the rest, the lurching rhythm and dense instrumentation brings to mind Jefferson Airplane’s “White Rabbit,” and the dark psychedelia could be triggered by the brownest of psychoactive mushrooms. “It’s dark as a coal mine filling up with gas, I stand ready for the blast,” he continues, and concludes just before the track reaches its eerie and bracing climax, “I live in the darkness, it’s dark in here.”

The simmering, contemplative, jazzy experiment “Lizard Suit” follows. Darnielle’s clipped delivery belies the tastemaker (or has-been, it’s never made clear) persona he assumes, someone who wears “my lizard suit to the party, it’s so hard to get noticed in this town.” The dueling jazz piano parts eventually collide into chaos about four minutes in and with a quickness, it’s over. Horns provide the counterpoint to the more traditional piano parts on the similarly ominous “When A Powerful Animal Comes.” The narrator in this song says his group will “practice our prayers until some small hope crystallizes, follow the shoreline until some better hope arises,” but then, only a moment later, they “behold the beast awakes” and they “stand trapped in his great shadow when the dawn breaks.” We are left to imagine what happens next, as the cut concludes with a gorgeous instrumental postlude in which the horn parts intertwine with sparkling piano playing and dissolve into shimmering cymbals.

Whereas most would be terrorized by a sighting of the headless horsemen, for The Mountain Goats it’s an opportunity—“and as you approached, I could sense the threat,” Darnielle sings, “but a stranger’s just a friend who hasn’t shared his secrets yet.” While there may be lurking ulterior motive in the shape of a camouflaged marksman on “To The Headless Horseman,” at worst it’s self-defense and the affection for this character is unmistakable. On the bouncy “The New Hydra Collection” Darnielle imagines himself as a bit-player in a sci-fi B-movie, a lab worker who intones on the choruses that “someday, all of you people will know, the safe way isn’t the only way to go.” As their experiment proceeds, “all around the monitor station, big smiles, high-fives,” and “according to my projections, everybody’s gonna run for their lives.” The music may be mellower, but there’s no mistake that this is the same Darnielle who brought us “Lovecraft In Brooklyn,” “Damn These Vampires,” and “How To Embrace A Swamp Creature.”

While some of the songs are rooted in their geography, such as on the kick-off cut and “Kola Superdeep Borehole Tower,” this is not an album that resolves around a central geographical theme, such as earlier Mountain Goats records like “Full Force Galesburg,” “Tallahassee” and “All Hail West Texas.” Nor does it revolve around religion specifically, like the loosely themed “Heretic Pride” and the very tightly themed “The Life Of The World To Come.” Instead, it’s all about the dark. While instrumentally at times one can hear the orchestral pop approach of a suburban-light soaked U.K. band like The Clientele, the light we’re seeing here is more the streetlights and glimpses of light from doorways penetrating dark shadows. At times I’m seeing the green shadows at the top of “The Exorcist’s” staircase.

Darnielle’s affection for death metal is such that “The Best Ever Death Metal Band In Denton” is one of his best-known compositions (and funniest) and when he literally wrote the book on Black Sabbath’s “Master Of Reality” (via 33 1/3), he chose a fictionalized approach and assumed the persona of a youth in a mental institution. So naturally, when he chooses to rhapsodize eloquently (I’m not sure he’s ever not been eloquent) about “The Slow Parts On Death Metal Albums,” he comes at it from a respectful perspective. He includes details like “alien ships from ancient realms,” “ageless captains at their helms” and “rage at the sea, let it begin with me,” and if this track plods, it does so deliberately, extracting the “slow parts” and investing them with the meditative jazz-fest death metal acts have always begged for (Spinal Tap Mark Two, anyone?). At almost five-and-a-half minutes it’s one of the longer tracks on “Dark In Here,” and it comes close, but doesn’t overstay its welcome. 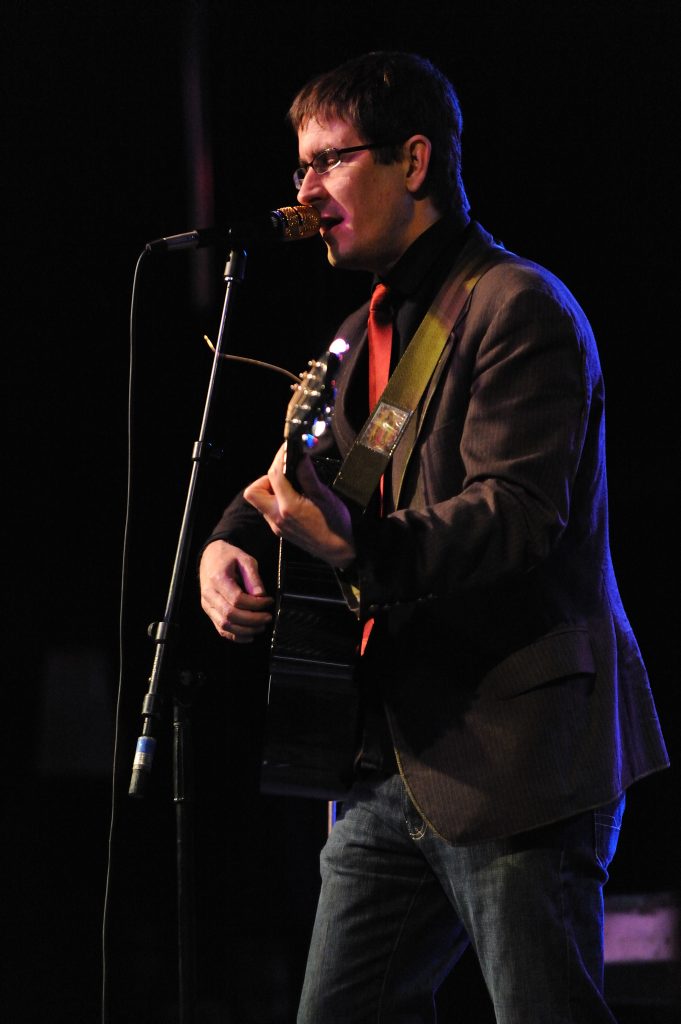 For my money, the most beautiful moment on the record comes toward the end of the running order. “Before I Got There” is a string-laden lament undergirded by a tribal drum pattern, beginning with a lengthy instrumental introduction until Darnielle spouts more of his trademark evocative imagery. “The acrid smell of burning branches / The relics all in ruin / Broken blades atop the altar / Cheap substitutions” is just how “Before I Got There” begins, and then he sees the bodies of his fellow worshippers. Is he imagining a Crusade leader coming upon his soldiers massacred in their house of worship? It certainly seems that way. Or do the references to “fallout” later in the song couch the song in the mise-en-scène of a post-nuclear apocalypse? Has there ever been a more gorgeous and heartfelt song written about such a circumstance, regardless? If you’re following along at home, the answer is no.

“Arguing With The Ghost Of Peter Laughner About His Coney Island Baby Review” asks the spirit of the infamous Creem critic (and contributor to Rocket From The Tombs and later Pere Ubu), who died in 1977, to give Lou Reed’s 1976 album another chance. Perhaps Darnielle is arguing that “Coney Island Baby” could be better appreciated if Laughner wasn’t under the influence of alcohol and drugs and had excluded the anecdote of a physical marital altercation related to the aforesaid substances from his published critique. Thankfully, like most things The Mountain Goats do, the results are oblique and poetic as opposed to pedantic and preachy.

While “Let Me Bathe In Demonic Light” might not be the best song on the record, it certainly sums up some of the recurrent themes nicely. “There I’ll Be,” John Darnielle sings on the choruses, “and who among you is coming with me, to show me my one true faith?” He pauses, then continues “when I arrive at my preordained place.” It’s yet another song about death and dying, and religion, but like most of “Dark In Here,” it’s a joyous meditation on that (perceived) darkness. Until then, Darnielle implies, he’ll continue to “bathe” in his “demonic light,” and all of his listeners are invited to bask in the same.

The Mountain Goats perform at SPACE (1245 Chicago in Evanston) on August 24 and 25. Both shows are sold out.