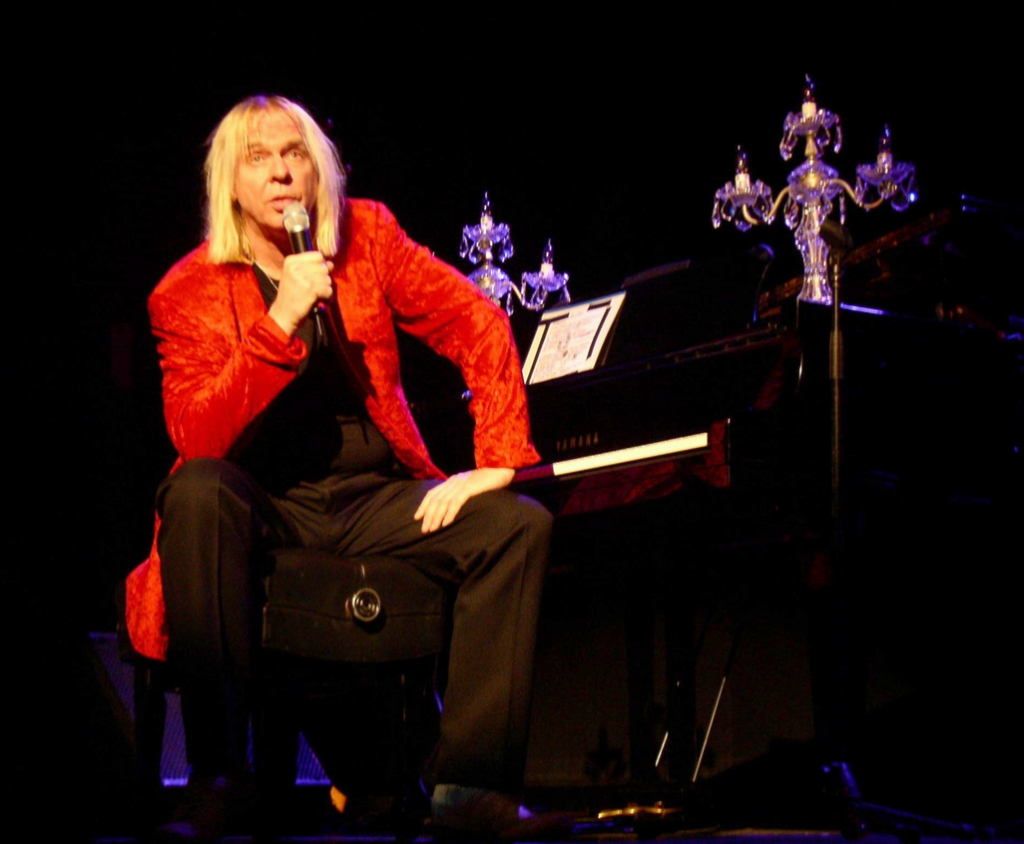 Rick Wakeman is renowned for a number of things. Dressed in his omnipresent cape, the Royal College of Music alumnus is best known as the on-again, off-again keyboardist for Yes. He first joined the progressive rock group in 1971, appearing on their breakthrough third album, 1971’s “Fragile.” That record features the hits “Roundabout” and “Long Distance Runaround.” Wakeman left the group in 1974, but subsequently rejoined and quit again no less than four more times. And that doesn’t even count his eight years in ARW, a band with fellow ex-Yes men Jon Anderson and Trevor Rabin.

But Wakeman’s association with Yes merely scratches the surface of his life and career. He maintains a creatively fertile,  staggeringly prolific career as an artist under his own name. Starting with the acclaimed 1973 LP “The Six Wives of King Henry VIII,” to date he has released more than a hundred albums. That’s not a typo. And more releases are on the way.

He’s also a peripatetic session musician with very high-profile credits. That’s him on piano for Cat Stevens’ “Morning Has Broken.” David Bowie’s “Changes”? That’s him on the ivories. He’s also playing on some of your favorite Black Sabbath and Lou Reed records. And today, through the modern miracle of digital file sharing, he often lends his keyboard talents to the work of artists in and beyond the progressive rock sphere. He also plays on many tribute albums, joining a long list of fellow rock legends.

And Wakeman has become known and admired by audiences far too young to have heard those early Yes, Bowie and Cat Stevens records on original release. In fact, he’s a familiar figure even outside of the music industry. For many years, he’s been a regular fixture on British radio and television. A raconteur of the first order, Wakeman is the source of a seemingly bottomless well of amusing anecdotes and witticisms. Earlier this year he was appointed with a CBE (Commander of the Order of the British Empire) in recognition of his services to both music and broadcasting.

Today at age seventy-three—and after surviving three heart attacks—Rick Wakeman is as busy as ever. The pandemic (with lockdowns in Britain far more restrictive than what we have experienced here) doesn’t seem to have slowed him down a bit. Last year, he released “The Red Planet,” an instrumental album that followed on from the music of his most celebrated seventies period. Working around the obstacles posed by the global virus, that album was recorded remotely, with Wakeman’s fellow musicians emailing their instrumental parts for assembly into the final mix.

And the self-proclaimed “Grumpy Old Rock Star” is back on the road, picking up his busy tour schedule where he left off before COVID-19 pressed the global pause button. Things are a little different: unlike his previous songs-and-stories tour in which he appeared alone onstage with a grand piano, this run of dates, which includes a November 4 show at the Copernicus Center, finds Wakeman dusting off a few synthesizers, bringing them along to add tonal color and complexity to his lively performances.

“Most things work on the piano,” Wakeman says. “But some don’t, especially when you’re going to take any of the church organ pieces like ‘Jane Seymour’ [from ‘The Six Wives of King Henry VIII’] or something like that. So I’m bringing a couple synths this time, just to vary things a little.”

An old hand at performance, Wakeman has done enough concerts to know how he wants to approach a gig. “I do have a set list, but I rarely adhere exactly to it,” he admits. “Different cities you go to, there’s always a story. Something reminds you of something, and you end up playing a completely different piece than what was on the set list.” He notes that he has played in Chicago many times over the years, starting with his first Yes tour in 1971. “We were fourth on the bill,” he recalls, laughing. “But of course just a few years later, quite a lot of the triple live album ‘Yessongs’ was recorded in Chicago.”

Wakeman thinks of a set list as a series of stepping stones. “As long as you still get to the main stones and build off the others—not having fallen in the water too many times—you’re all right,” he says. Freely admitting that playing the same set night after night would get boring for him as well, Wakeman sums up his approach onstage as “grumpy old man meets improv.”

Rick Wakeman is a gregarious, outgoing sort, and that comes through in his live show, not to mention in interviews. “I like people,” he says. “I like talking to people.” And while pre- and post-show meet-and-greet events aren’t possible in the pandemic era, Wakeman interacts with fans as much as possible. And he pays attention. Recalling pre-COVID experiences, he says that people would often ask him why he didn’t play one or another specific piece.

While he’d sometimes explain that there was a good reason for not playing a given tune, other times, he’d take the suggestions under consideration. “I do the old actor’s thing at the end of every show in the dressing room,” he says. “I make notes on how everything went, any piece that I might be able to improve on a little bit, something that might have happened musically, or if someone said, ‘Why didn’t you play this piece?’ I’d write that down. Then, very much at the end of the tour, when I’m home, I look, and maybe there’s one piece that’s cropped up that people have asked for quite a few times.” And that field research informs the set list for future tours. “I can honestly say that it’s very much an audience-chosen show,” Wakeman says.

His work in television has sharpened his skills as a performer. “I’ve been doing TV for twenty, thirty years now, on and off,” he says, “and it certainly has helped.” Wakeman notes that performing solo makes a different set of demands on an artist than does playing within a band: “When you’re with a band, there are pressures to make sure you do your level-best to help the band.” And he says that works both ways. “I think that a musician’s job within a band is to encourage the other musicians, and be encouraged by them, too,” he says. “Trevor [Rabin] would often do things that would inspire me to do something I hadn’t done before, to play something a bit different.” He says that Yes guitarist Steve Howe and bassist Chris Squire similarly inspired him.

At its core, rock ‘n’ roll is supposed to be about rebellion. Against that backdrop, it’s fair to ask if Wakeman is part of the establishment, what with his CBE and all. With a hearty laugh, he says, “That’s a great question! I was very proud to get it. I’m a big Royalist.” He believes that the establishment and the rebellious side can coexist. “Because it’s the rebellion that creates the establishment,” he says.

Wakeman recalls that when his friend and Queen guitarist Brian May received a CBE of his own, he climbed atop Buckingham Palace and played “God Save the Queen” on his guitar. “How’s that for rebellion and establishment?” the keyboardist asks. “Music and art and fashion have always been a form of rebellion that has an element of tongue-and-cheek, but also a lot of good in it,” he says. “So rebellion in music, as a part of the establishment? Bring it on!”

Having played, toured and recorded so much over the last fifty-plus years, Wakeman could be forgiven for deciding that he has few horizons left to explore. But he emphasizes that he is never at a loss for new projects.

“I’m working on a musical with Tim Rice,” he says, noting that the project will consume at least another year or two before it’s finished. “And I’ve always wanted to do a ballet,” he says. He’s been collaborating with one of the directors at the Royal Ballet to bring that dream to fruition. “Also, my wife writes children’s books, and we want to turn a lot of those into musical adaptations and little playlets that schools of all ages can do,” he says. “So, that’s what’s on our frontier, and that should tie me up until I’m about 104. Then, I’ll start looking again to see what comes next!”

But for now, Rick Wakeman is focused on his solo tour. And between the songs, audiences can expect to be regaled with amusing tales both old and familiar. One such tale concerning the keyboardist has circulated so long and wide that it has attained mythical proportions. As the story goes, onstage in the seventies during some of the more ponderous passages of Yes’ epic-length “Tales From Topographic Oceans,” Wakeman got bored, ordered take-out curry and dined on it while seated behind his huge bank of keyboards.

While the outlines of the tale are based in fact, Wakeman explains that the truth is a bit more prosaic. “I’ll be brutally honest with you,” he says. “I didn’t at all enjoy playing ‘Topographic Oceans’ on stage.”

During one concert, the band had worked its way to side three, a passage during which the keyboardist found it hard to remain awake. “And my roadie at the time, the late wonderful Toby Errington, used to lie underneath my keyboard on the pretense that if anything went wrong, he could fix it. He shouted out from under the organ, ‘What are you doing after the show?’” Wakeman told him he’d love a curry, after the show: “I bowed my head under and said, ‘I’ll have chicken vindaloo, bhindi bhaji, rice and a stuffed burrata.’”

He says that a mere twenty minutes later—by which time Yes was onto playing side four—“the smell of curry came wafting up.” He planned to wait, but Errington warned him that the food would go cold. “So I laid it out on top of the Hammond,” Wakeman says. “Chris [Squire] came over and had a pappadum. It woke the front row of the audience up, that’s for sure!”

The audience at the Copernicus Center shouldn’t expect to witness Rick Wakeman eating chicken vindaloo. Instead, he’ll play hits, fan favorites and occasional obscurities from his vast catalog of Yes and solo works and beyond. And in between the songs, the Grumpy Old Rock Star is sure to regale audiences with jokes, asides and irreverent—yet fact-based—anecdotes.

UPDATE:  Rick Wakeman’s Copernicus Center show has been postponed; ticketholders are advised to hold on to their tickets.