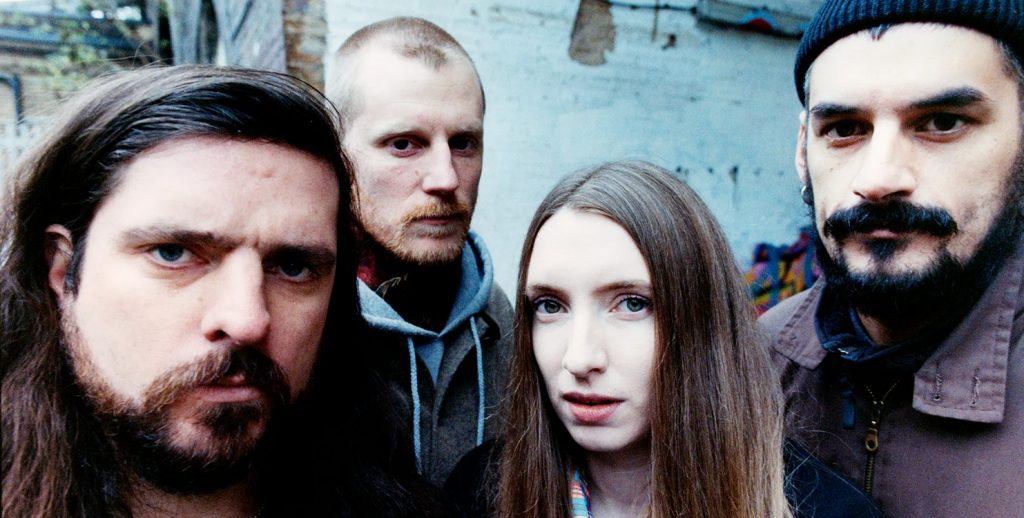 Eavesdropping on someone else’s one-way chat with a friend may not seem that exciting. Voyeuristic perhaps. Yet, when that conversation is superimposed on a propulsive soundtrack, inquisitiveness sways and surges toward approachable if not danceable music with a wry narrative track. Dry Cleaning, with its lead vocalist Florence Shaw’s speak > sing presentation provides that exacting form of bi-level, familiar-yet-foreign sound. It is almost as if she has her phone cradled under her neck and is walking around while doing the dishes in the kitchen, talking to a friend or relative.

“Would you choose a dentist with a messy back garden like that? I don’t think so.” (“New Long Leg”)

And it’s not particularly surprising to learn that the band was essentially formed in 2018 prior to having a lead vocalist. Guitarist Tom Dowse, drummer Nick Buxton and bassist Lewis Maynard’s music usually starts with solo bass or guitar lead riffs before the other guitar accents. For those who like to associate, when the bass leads, Pylon or Shopping come to mind, while when the guitar leads, it seems a little proggy, similar to some of Black Midi’s Frippertonic style, yet remaining chiming and harmonic and forward-moving.

Adding Florence’s spoken-word performance, sometimes crowdsourced and edited and sometimes self-generated, creates suspense. The text can have meaning, or the mere cadence and wry boredom of the tone of her voice and pronunciation act as its own counterpoint instrument. My closest association of pulse, pace, cadence of lyrics and poetry on top of driving music is Mark E. Smith and The Fall, yet the members of Dry Cleaning profess to have been unaware of said artist. Nonetheless, there is a commonality of caustic, disconnected imagery combined with the pace or meaning of lyrics, connected with—or in any way informed by the music or vice-versa—as well as the commonality of memory in the words that make the cut for inclusion in a song, about a childhood cat or a grandmother.

“Anyway, I remember swinging for hours, trying to reach higher and higher, and I felt like the king of the universe. Everything was so easy. Everyone was alive, and they looked so happy… I miss my grandmother.” (“Goodnight”)

It is funny how the clarity of words, and the ability to listen effectively, can often convey a message independent of, or on top of, actual lyrics. And, many musicians, including The Velvet Underground, Pearl Jam, James Brown, Donovan, Roxy Music, Mekons, Parquet Courts, Sleaford Mods, Gang of Four, Viagra Boys—you can name your own—have used speech instead of singing in certain songs, and in certain ways to convey a sense of meaning, importance or maybe something else entirely; that is not for us to decide.

“My only ambition in life is to grip the roots of your hair.” Wow—“Strong Feelings” conveys some kind of meaning!

Few performing musical artists are one-hundred-percent spoken-word poetry. Gil Scott Heron forcefully and thoughtfully presented his poetry about our inhumanity in a syncopated spoken style that spoke to the soul. In Chicago, a beloved spoken-word band of the eighties, Algebra Suicide, featured the dual imagery of Lydia Tomkiw’s poetry superimposed over Don Hedeker’s ethereal soundscapes. Patti Smith will speak, chant, sing and read in her performance.

Poetry has been spoken or sung at least as far back as Ancient Greece. Homer, or the improvisational hip-hop collective known as Homer, are said to have sung epic poems a cappella, or accompanied by a four string lyre. In other words: words and guitar. Is a bard a poet, singer, a storyteller, or an actor—or do we check all of the above? And do rappers sing or talk?

These are the types of questions you might ponder when perceiving the live or recorded performances of Dry Cleaning—one of the hottest independent bands in England today. In their album “New Long Leg,” there are lyrics and songs you can live in or with. Sometimes you receive vivid images about how it is to live without.

“What are the things that you have to clear out? Baking powder, big jar of mayonnaise. What about all the uneaten sausages? Clean the fat out of the grill pan” (“Leafy”)

I mean who hasn’t cleaned up after someone they love or used to love? Should these words be sung, said or spat?

Whether you prefer form or meaning, sound or words, or the sound of words, it doesn’t alter the ability to enjoy the moment connecting with your body or your mind—the gift of sound and vision. Words spoken over jagged-edged guitars is not the norm; and that is the field within which Dry Cleaning operates with dynamic impact. Ultimately, you are the one beholding the art. Whether meaningful, danceable, both or neither to you, all I can advise is that the band’s pulsating, driving soundscapes are worth your time and interest.

Screw the intellectualization. Cue Dry Cleaning and listen to someone having a chat with her best friend, former friend or directly with you over your soon-to-be favorite driving soundtrack.

“Do everything and feel nothing” (“Scratchcard Lanyard”)

Dry Cleaning plays the Empty Bottle on November 15 and 16. The shows are sold out, though a few tickets may be made available at the door on the day of the show. “New Long Leg” on 4AD records is available on the Dry Cleaning’s Bandcamp page.