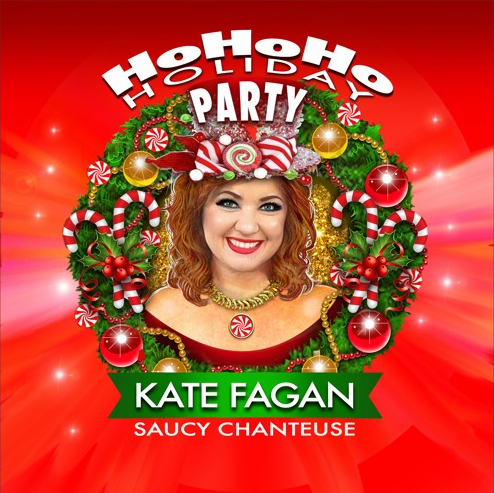 I’m not entirely certain what attracts recording artists to Christmas music, given that the public appetite for it, while apparently substantial, is also pretty conservative; people seem willing to wait all year to hear exactly the same tunes they’ve been hearing every single winter of their lives. Attempts to add to the canon are rarely successful and are usually lamentable. So what’s the inducement to try?

Possibly it’s the sheer joy of performing the old chestnuts. That’s certainly the case with the new album by Kate Fagan, lead vocalist for Chicago ska legends Heavy Manners—though the chestnuts on “Ho Ho Ho Holiday Party” tend to be of the novelty variety. On the album cover, Fagan bills herself as a “saucy chanteuse,” and she does her best to live up to the title, giving a wry, winking reading to lines like, “Santa Claus got stuck in my chimney / When he came last year.” The sauciness reaches a giddy apotheosis in “Santa Lost a Ho” (“He used to go ho-ho-ho / Now he’s only going ho-ho… Santa lost a ho”).

Fagan recorded the album in New Orleans with a variety of local and touring players, and they join in with tremendous brio. I particularly like Jeremy Joyce’s searing guitar solo on “What Do Bad Girls Get?” The tune, penned by Joan Osborne, features endearingly witty ribaldry: “You’ve got your calculator / You’re counting up my sins / But Santa please consider / How much worse I could’ve been.”

Overall, the album has the feeling of a party that’s been going on several hours before you arrived. There’s a shaggy, jovial energy that ranges over a variety of styles, from the blues of the opening track, “Hey, Santa” (with a great rollicking performance by pianist Tom Hook) to the honky tonk of “Hot Buttered Rum” (“I saw three ships come sailing in / Sailing three sheets to the wind”). The only misfire is “Every Day Will Be Like a Holiday,” an earnest, R&B-lite tune that puts a damper on the high spirits. It’s immediately rectified by the succeeding cut, the appropriately effervescent “Champagne, Champagne,” which is only tangentially related to Christmas—but by this time you’re not inclined to nitpick. 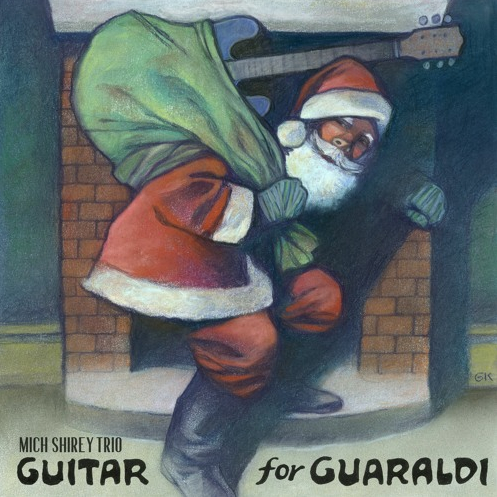 The mood is dramatically different on The Mich Shirey Trio’s new release, which features material the ensemble has performed at venues around Chicago for several holiday seasons. “Guitar for Guaraldi” is a slight reinterpretation of the much-loved music pianist Vince Guaraldi wrote for the 1965 TV special, “A Charlie Brown Christmas,” the soundtrack of which became an enduring bestseller—making Guaraldi one of those aforementioned rarities who added something new to the Christmas canon.

Guaraldi’s original compositions were recorded by his trio, which included Fred Marshall on double bass and Jerry Granelli on drums. Shirey’s trio keeps the same basic structure, with Nick Fane on upright bass and Dave Brandwein on drums; but it crucially swaps out Guaraldi’s cool, gliding keys for Shirey’s warm, murmuring strings. The result is a synthesis that’s both sufficiently different from the original, and reassuringly faithful to it.

Even so, it’s an audacious move on Shirey’s part, to turn his guitar to works not only written or arranged for piano, but known so intimately by so many people. And he doesn’t always entirely thrive; his version of “Skating,” for instance, is engaging enough, but can’t quite duplicate the cascading, crystalline effect Guaraldi achieves.

Yet on other tracks, he surprises and delights. The opening cut, on which his trio tackles Guaraldi’s arrangement of Ernst Anschütz’s venerable carol, “O Tannenbaum,” takes Guaraldi’s gentle swing as its starting point, but gets much more athletic in the midsection—when, unlike Guaraldi’s version, all the players get solos, and seize the opportunity to make the most of them.

Given the amiable, ear-friendly nature of the album, it’s likely that people will use it as a backdrop for seasonal gatherings, as they have with Guaraldi, which is certainly understandable; but listeners are thus likely to miss many of the trio’s nuances (like Shirey’s intimate reading of “Christmastime Is Here,” which plays as series of enchanted exhalations) and innovations (like the witty quotation from “Frosty the Snowman” in “Skating”).

Shirey stakes one personal claim in the set, which is his version of “God Rest Ye Merry Gentlemen,” which, to the best of my knowledge, Guaraldi’s trio never recorded. Shirey gives the tune a bossa nova groove, and lets Nick Fane’s bass take the melody line—two highly idiosyncratic ideas that work beautifully together. It may be my favorite track on the album. “Guitar for Guaraldi” is a lovely, captivating tribute and I’m glad Mich Shirey released it, but I hope his next Christmas album will be all his own.