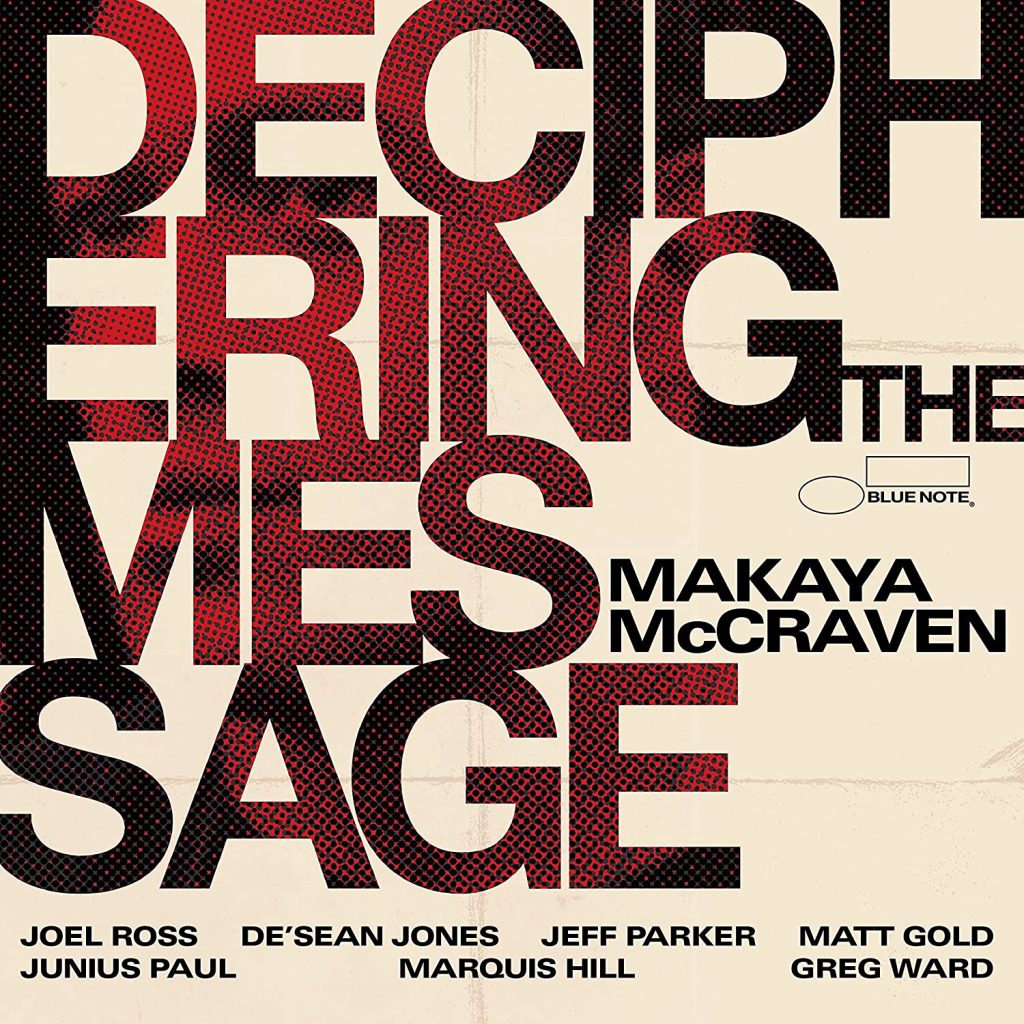 At its best, jazz is a conversation; players listen and respond to each other, and build their way to a consensus—a statement. But listeners have their responses, too; and if the listener is also a player—like drummer and self-professed “beat scientist” Makaya McCraven—the conversation can continue… even over a span of years. And McCraven’s latest album finds him talking across the decades.

For “Deciphering the Message,” iconic jazz label Blue Note gave McCraven the keys to its vault, and he seized the opportunity to add his own dazzling commentary, footnotes, and alternate views to a baker’s dozen of classic (mainly hard bop) tracks by Hank Mobley, Dexter Gordon, Horace Silver and others. Art Blakey is an especially vivid presence; perhaps unsurprisingly, given that Blakey, like McCraven, was a drummer who was also a bandleader.

McCraven’s collaborators are vibraphonist Joel Ross, trumpeter Marquis Hill, guitarists Jeff Parker and Matt Gold, bassist Junius Paul, alto saxophonist Greg Ward, and De’Sean Jones on tenor saxophone and flute. They appear to have as much to say as McCraven; their work throughout sparkles and surprises. There’s veneration for the originals, but also playful—sometimes aggressively playful—innovation.

You get a hint of what’s to come in the first track, Hank Mobley’s “A Slice Off the Top.” It’s a great tune, and it plays out the standard jazz manner: the band plays through the tune once, then returns to the top and the players take turns soloing over the changes, before returning to the original tune to close. There are four soloists on the original track, and they take their time, spiraling out their ideas over many measures. In McCraven’s remix, he chooses two of those soloists—saxophonist Mobley and trumpeter Lee Morgan—and has them speak back and forth to each other, essentially sharing a single solo. It’s audacious and witty—they seem to be feistily elbowing each other out of the way—and it works beautifully.

For the succeeding tune, a reinvention of Kenny Dorham’s “Sunset,” McCraven supplies a funk-inflected beat, and adds solos by his own band. From this point on, his presence is ever more strongly felt, with adventurous new grooves, plus sampling, looping, and in many cases an abandonment of form—what we get are trance-like mantras. In “Wail Bait,” all that remains of Clifford Brown’s original is the first six bars of its admittedly gorgeous eight-bar intro, which repeats a few times, while McCraven adapts a new groove to it; then his collaborators come in with an entirely original, sparkling funk fantasia. In “C.F.D.,” McCraven puts Jackie Wilson’s shimmering piano intro on a continual loop, than weaves a sonic garland around it; the result is spellbinding.

The original recording of Bobby Hutcherson’s “Tranquility” is—as its title suggests—meditative, spare and silken; McCraven turns into a fitful dream, with hard shifts between looped phrases and a Gatling gun percussion, and a searing blast of electric guitar. It’s beautiful and hallucinatory.

There’s not a standard method of attack here; each classic cut evokes a unique response from McCraven. Take Horace Silver’s “Ecaroh.” The original track features only Silver’s trio, but McCraven adds to it no more than his own percussion and Joel Ross’ vibes. Turns out it’s all he needs: the resultant transformation is both complete and exhilarating.

McCraven himself is unsurprisingly the MVP here; track after track, he astonishes the ear with the sheer diversity, complexity and originality of his playing. He seems to have an endless store of rhythmic ideas, and he scatters them into the mix as naturally as he breathes. He’s one of the most exciting jazz players in town, but this project seems to have brought out a little something extra in him. I’m going to guess that that’s due to his rubbing shoulders with the likes of Blakey and the others. It’s not the first time he’s gone this route—his previous album was a remix of Gil Scott-Heron’s “I’m New Here” (which McCraven titled “We’re New Again”)—and I don’t expect it’ll be his last.

There’s an additional element to consider on this one. McCraven and his collaborators recorded their parts in isolation (whether due to the pandemic or not, I can’t say), and sent them back and forth to each other. Which means that McCraven has built an album with band members spread not only across time, but across space—in both different decades and different rooms. It begins to redefine the very definition of a band; and it does so with bravura energy and éclat.

“Deciphering the Message” is available from the usual outlets, including Blue Note’s online store.