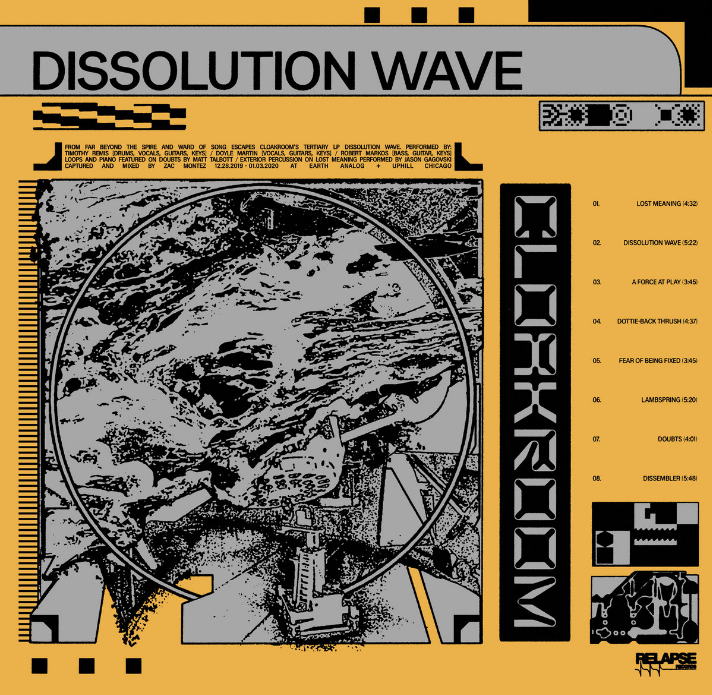 Cloakroom’s new release is a concept album, and the concept is a notably exotic one. This self-billed “space western” is set in a cosmos in which the title phenomenon has erased human art and abstract thought; only songwriters, and something called “the Spire of Ward and Song,” remain to keep the cultural train on track. “Essentially,” the press materials tell us, “the system is a karmic wheel measured by the worth of a song.”

I’d have liked to have some of the narrative gaps filled in; but “Dissolution Wave” isn’t a linear-narrative concept album like, say, The Decemberists’ “The Hazards of Love.” What guitarist-vocalist Doyle Martin has delivered is a kind of expansive, highly baroque metaphor through which he can process some of the traumas of the past few years. “Dreaming up another world felt easier to digest,” he says in the press materials, “than the real nitty-gritty we’re immersed in every day.”

Cloakroom as a band is hard to peg; the Indiana trio has been labeled space-rock, doomgaze and—by a listener on their Bandcamp page—“stoner emo,” and all of these fit. But the band is most often filed under shoegaze, and that’s where I continue to place it, if only because my frustrations with the group tally with those I feel for that particular genre—the most significant of which is the difficulty of making out, in all the sonic sludge and fuzz, the words to any given song.

Anyone who’s followed my reviews knows that I’m drawn most immediately to the text; and “Dissolution Wave” in fact delivers some riveting lyric passages. It’s just that many of them are swallowed up in the admittedly gorgeous noise being made by Martin, bassist Bobby Markos and new drummer Tim Remis, who hits so hard on some of these tunes, he might be trying to make up time for not having been on the previous two albums. Doyle’s spare, fragile vocals—again, very lovely and often hypnotic—keep getting steamrolled.

This is particularly frustrating in the title cut, because there’s some great writing here. “Flora and the fauna out of places to hide,” Doyle sings, “Surface to mine / Of all the stellar wonders that somebody could like / Meteorites / In the time it takes all these falling bodies to light I’ll name one after you / You could not hear what they say like I do.”

There’s a lot of weight and pathos here—most of it lyrically sparkling (“Like the giant damselfly we’re wearing out our wings / We’d forgotten how to land and consequential things,” Martin sings on “Dissembler”), but there’s occasional lightness as well. “A Force at Play” is a jangly, tuneful acid-pop tune, and carries some of the album’s most hopeful lyrics: “Has this game gotten easy / Or have I always moved with ease.” By the time we get to the languid, meditative “Doubts,” that song’s confidence has eroded nearly entirely. Our post-wave songsmith wrestles with the burden of his ability to carry on (at least that’s how I’m reading it). “Spell / I know not the spell,” Martin croons with devastating conviction, “to recite in the mirror for to redeem myself… maybe I should cherish the gift / maybe I should smash the mirror to bits.” (Martin’s guitar solo on this track is equally evocative.)

Despite my gripes, this is a great album to just sit back and bask in. The tension between the bursts of precision musicianship (like the lurching extra beat occasionally tacked onto a measure in “Lost Meaning”) and the appealing shagginess of the enterprise keep you rooted in the moment. I’m especially fond of the way some of the songs just abruptly… end. Like something interesting passed the studio window, and Martin, Markos and Remis all stopped playing to look at it. Dissolution wave, indeed.