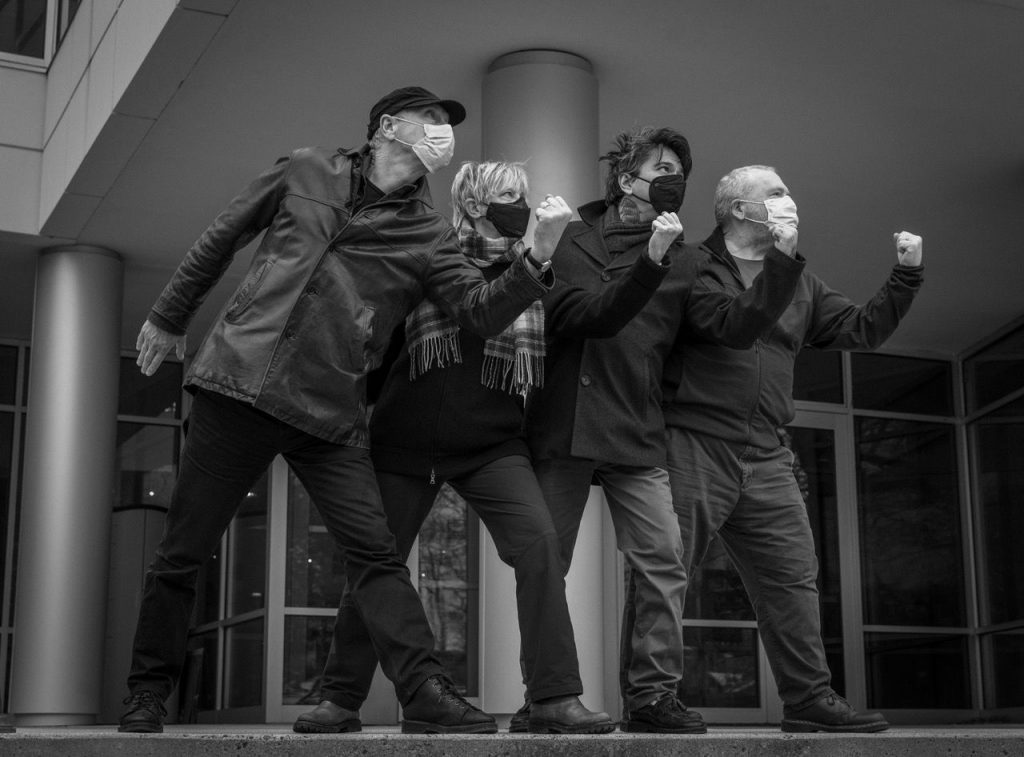 “We did not want a tribute band,” declare Jon King and Hugo Burnham, the remaining original members of Gang of Four when discussing the reformation of the band for its upcoming tour, which hits the Bottom Lounge on March 2. “We were, and are again, a band that takes great pride in the way we perform together, and expect to remind people how powerful we used to be and are again, finally…”

And powerful they were. Founded in Leeds, England in 1976, the purpose of Gang of Four was to avoid cliché in all forms, including music, lyrics, performance and action. They uniquely framed music that confronted all norms. The lyrical content was sociopolitical, boldly presenting listeners with issues like the macro-failure of capitalism and the micro-tragedies of the loss of individual ambition and disintegration of personal relationships. Amazingly, in “At Home He Feels Like a Tourist” (and yes, in the song King pivots to the perspective of how “she” feels like a tourist too), all of these are somehow held up for inspection.

Yet Gang of Four challenged ideas with the punctuation of a beat you can dance to. The musical content was discordant, with searing, short, sharp guitar slashes layered on top of propulsive bass and military disco march drums, compelling your body to act as well as your mind. I don’t typically turn to Flea of Red Hot Chili Peppers for cultural support, but I feel compelled to quote his liner notes to the band’s box set to get you to stop reading this review: “Go Listen to the Gang of Four album ENTERTAINMENT! Right now. Turn that shit up loud and rock the fuck out. Dance. Think.” In fact, I will take that advice and be back after “Anthrax,” which is almost an art piece with King and Andy Gill simultaneously speak-singing the pros and cons of songs about love.

Let’s resume, shall we?

Jon King and the late Andy Gill were friends at fifteen who loved a wide variety of music, from Jimi Hendrix, James Brown, Muddy Waters, electric blues, funk, reggae, the band Americana, Dr. Feelgood’s British-ized version of American R&B and dancing. At university, they met Hugo Burnham, who had been responsible for booking bands at the school and they hung out with other creative types, including several future Mekons. Prior to starting the band, King and Gill traveled to New York on art and architecture grants, they were exposed to the CBGB scene, hanging out with and experiencing the performances of Television, Richard Hell and the Voidoids, early Talking Heads, the Ramones and Patti Smith Group.

On King and Gill’s return, England was in the midst of both British implosion and the punk explosion. Leeds was a harsh place during a time of political polarization, with the rightwing engaged in increasingly violent acts (sound familiar?). As Burnham says, “Jon King’s lyrics were (and remain) essentially timeless—we deliberately avoided the easy ‘Fuck Thatcher/Screw Reagan’-type approach, focusing instead on the things that drive people, that upset or stimulate them, whether it was back in the day, or today… the same problems and worries and questions exist—if not with greater intensity.” In this way they sought to look at perceived ideas that should not remain unchallenged.

Gang of Four maintained a DIY ethic, yet the NY/UK dichotomy of sonically reacting to and addressing economic and social crises presented new concepts and approaches. The band developed a sound that, according to King, eschewed the conservative, sped-up Black Sabbath vibe of the Sex Pistols. Incorporating funk, R&B, reggae, soul and even disco, it provided room to breathe, permitting the audience to encounter the urgency of a song’s meaning without necessitating urgency in the music. Through its strength and commitment, and the therapeutic nature and fun of communal dance, the band helped create a genre that has rightly or wrongly been classified as post-punk.

Gang of Four proved, and is back to demonstrate, that danceability does not have to equate with saccharine submission. Two of their songs were banned in the U.K.; one for sexual references (“At Home He’s a Tourist,” which references the “rubbers you hide in your left pocket and one for war”), another because of the Falklands invasion (probably its most commercially successful song, “I Love the Man in Uniform”). Those same themes, Burnham says, clang true today.

Since leaving Gang of Four, both men have enjoyed professional success. King is a media executive and Burnham a college professor. As grownups they are “creating and implementing plans and budgets. Everything around this upcoming tour takes a lot of budgeting, organizing, and risk on our parts.” Material success has not, however, altered their views on wealth disparity; they believe that we should “Tax the uber-wealthy… Our distorted economic system is working very well for billionaires and the top one percent. It’s not doing well for the rest of us.”

King and Burnham have a lot to tell and show us, and they’re very excited about revisiting their creative work for both old and new audiences. They’ll “be playing songs from our first three albums—the peak of our live and recorded work over the past forty-plus years, really, and the ones we love playing the most.”

Part of their excitement derives from their affinity for a new and old member. Sara Lee, who was the bands second bassist in 1982-84, when original bassist Dave Allen left the band, was at least partially responsible for pushing out many of the band’s most danceable grooves. In their view, Sara “has had a far more illustrious career than any other G4 alumnus,” playing with Robert Fripp’s League of Gentleman, The B-52s and Indigo Girls, among others. Burnham believes that playing with her is “making me a better drummer, again.”

The new member, guitarist David Pajo (ex-Slint, Zwan, Yeah Yeah Yeahs and Interpol) has the near-impossible task of filling Gill’s guitar role. King and Burnham note that while they consider Gill to have been one of the greatest guitarists ever, we should not expect rote adulation from Pajo. “He has big feet, filling those big shoes with verve and style, and he’s breathed new, raging fire into the songs. You’ll see for yourselves just how he has taken the work and shaken it by the neck…with respect and love rather than reverence.”

In 1979-1981, Gang of Four produced music that people still talk about and pay attention to. Those who check out their Matador box set will hear how the band was able “to recapture, revive, and re-present our songs and our legacy in a way that is the most honest and truthful.” Those that make it to the Bottom Lounge should experience something old and meaningful with revived energy, while taking an active role as a player in fulfilling Burnham and King’s goal of “fill[ing] rooms with noise and joy.” Isn’t that the essence of entertainment we all look for?