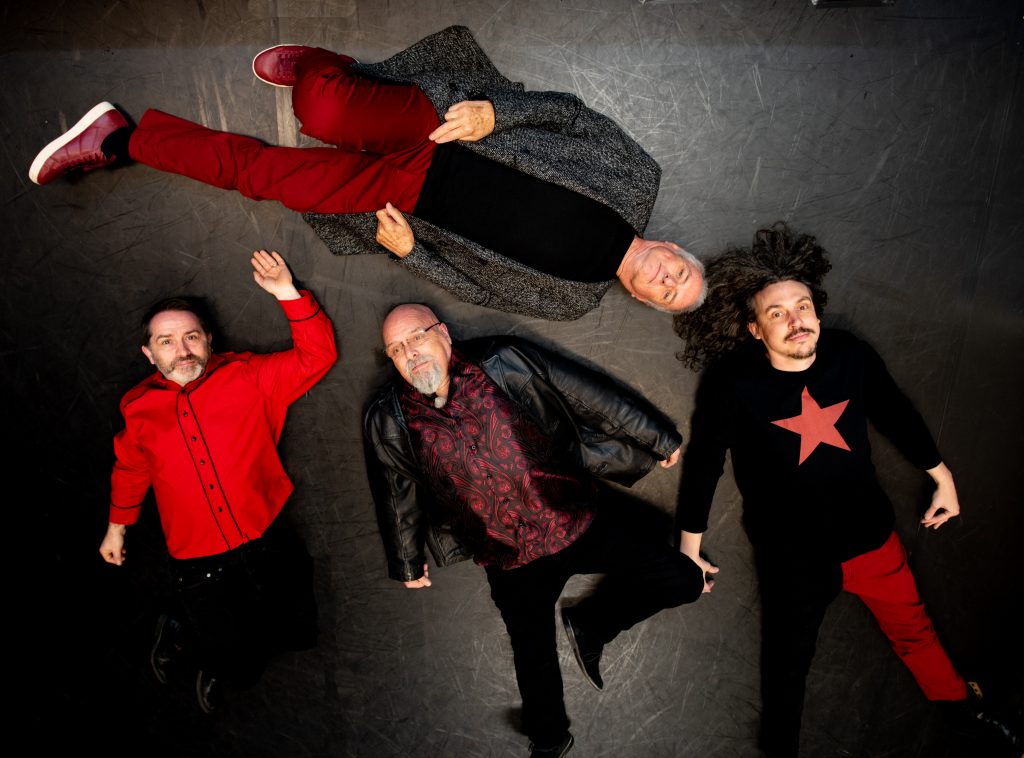 There’s nothing I enjoy more than waxing poetic about the poetic wax that a certain Swindon post-punk outfit pressed starting in the late 1970s and ending in 2000. Andy Partridge (guitar, vocals), Colin Moulding (bass, vocals) and Terry Chambers (drums) formed a group in that town about seventy miles west of London in 1972 as sort of a glam-band outfit inspired by the New York Dolls, settled on the name XTC in 1975 (after multiple name changes) and released their full-length debut, “White Music” in 1978. After XTC stopped touring in 1982, drummer Chambers left the band, decamped to Australia and got married (not necessarily in that order). Like most things with XTC (whose name was inspired by a Jimmy Durante quote and the way it looked in print, and not by the drug Ecstasy), the timelines and lineup changes are a complicated game.

Highlights of their 1978 debut included “This Is Pop” (the inspiration for the title of a 2017 documentary about the band) and “Statue Of Liberty,” banned by the BBC for a reference to “sailing beneath her skirt” upon arriving in New York Harbor. Although loved by many, I was not a fan of their sophomore slump, “Go 2,” notable for “Are You Receiving Me?” but not much else, except for a track written in tribute to Brian Eno (“Battery Brides (Andy Paints Brian)”), after he declined to produce the record, saying XTC did not need a producer.

“Drums and Wires” in 1979 delivered the breakthrough single “Making Plans For Nigel,” a Moulding composition. Although Partridge was the band’s primary creative force and writer and sang lead on the majority of the songs, Moulding’s contributions would frequently become the hit singles, causing friction in the creative partnership throughout the band’s lifespan. Their label, Virgin, selected Moulding’s “Ten Feet Tall” to be XTC’s first U.S. single, but truth be told, the record is an embarrassment of riches, as was the following year’s follow-up, “Black Sea.” That album not only included the UK hits “Towers Of London” and “Generals And Majors” but the blistering puncturing of conservative mores that kicks it off, “Respectable Street,” the helium-caffeine-drenched “Burning With Optimism’s Flames” and the comic book-inspired novelty “Sgt. Rock (Is Going To Help Me).”

XTC was never really a punk band, and never really post-punk, either. Given their origins, the group could more accurately be categorized as pre-punk, but the truth is, it was a pop band that harnessed frenetic punk energies and rode the punk wave into new wave and beyond.

That “beyond” began in earnest with release of 1982’s double album “English Settlement” and the successful single “Senses Working Overtime.” The record, while of a piece with their earlier discography, marked a movement in their sonic approach away from an electric guitar assault to a more pastoral, acoustic sound. Second guitarist Dave Gregory (1979-1997) contributed parts from his Rickenbacker twelve-string and began playing keyboards on this record, further filling out what had been a skeletal sound circa “Drums and Wires.” Keyboardist Barry Andrews (who went on to co-found Shriekback in 1981) had left after “Go 2.” Promotion for the record was short-circuited due to show cancellations related to Andy Partridge’s stage fright, anxiety and possibly his withdrawal from Valium (or a combination of all of the above), and they played their last show in front of a proper audience in April 1982 in San Diego.

Drummer Chambers contributed to 1983’s “Mummer” but didn’t see the point in continuing with the band if they weren’t going to tour, and left mid-session. His drumming appears on three of the ten tracks, including the Moulding-penned single, “Wonderland.” That electro-acoustic ballad and Partridge’s “Love On A Farmboy’s Wages” (what may have been his first recorded reference to the band’s increasingly poor financial situation) are the only highlights of a record that may have taken their pastoral acoustic obsessions too far. “The Big Express” took a harsher, more dynamic direction and rocked out with actual funk inflections, but didn’t produce any hits per se, despite the stellar opener “Wake Up,” and the sublime pop of “You’re The Wish You Are I Had.” “I Bought Myself A Liarbird” references Partridge’s concerns about being ripped off by their manager (allegedly, they were) and “Train Running Low On Soul Coal” took the railroad metaphor to its natural whistle stop, which may have referenced his concerns the act was running out of proverbial steam.

But all of this was before my time. I joined the XTC party after seeing the video for “Dear God” on MTV’s “120 Minutes.” “Skylarking,” produced by pop legend Todd Rundgren and released in 1986, successfully merged the pastoral acoustic approaches of releases like “English Settlement” and “Mummer” with their earlier penchant for electric guitar-powered pop as well as the layered sonic assault of “Black Sea” and “The Big Express.” The sound of their ninth album was also inspired in part by their psychedelic alter-egos, The Dukes of Stratosphear, who pseudonymously released the “25 O’Clock” EP in 1985 and “Psonic Psunspot” in 1987. Partridge viewed “Dear God” as a failed attempt to encompass his doubts and outrage about God and religion in a short pop song, and fought to keep it off the album, but when it was released as a B-side for the first single, “Grass,” college radio started playing it, and the song was put back on the full-length. The twelve-inch single vinyl pressing of the B-side with “Dear God” on it has the words “NO COMMENT” etched in the dead wax space.

Although Partridge was not a fan of working with Rundgren, he warmed to the end product, and most critics (myself included) consider it their critical zenith. “Skylarking” was formed into a song cycle of sorts with lavish orchestrations (mainly at the behest of Rundgren) and includes many of XTC’s better late-period songs. This was the album that made me a fan—one of the highlights of a high-school spring-break trip to London was a visit to Tower Records, in which I purchased pretty much their entire discography on audiocassette, most of their recordings being impossible to find in my small town in Kansas.

“Oranges and Lemons,” the 1989 follow-up, was even more infused with psychedelia but also took the group’s unique sonic sensibilities and clever lyrics to new heights. Buoyed by the success of Partridge’s “Mayor of Simpleton” and Moulding’s “King for a Day” as singles, it was their best seller in the U.S., peaking at forty-four on the Billboard charts. Again, the record has much more to offer, but is not an end-to-end success. It is overstuffed with ideas and without the advantage of the input and control of an experienced producer, given they had hired first-timer Paul Fox, who in contrast to Rundgren, was perhaps too deferential.

“Nonsuch” followed in 1992 and it was a real letdown, like the group was running out of ideas, which was a shame, as I was still a huge fan. “The Ballad Of Peter Pumpkin Head” contained some good ideas, but was a grating affair, and most of the rest of “Nonsuch” was sort of “Wrapped In Grey,” to reference one of the record’s few highlights, and one of Partridge’s favorites. Apparently that track was due to be the third single, but Virgin pulled it from production at the last minute, and this was the band’s breaking point with their label.

Dave Gregory gave up the ghost in 1997, allegedly out of frustration with the string arrangements Partridge wanted for their first non-Virgin release, 1999’s “Apple Venus Volume 1.” For both that record and 2000’s “Wasp Star, Apple Venus Volume 2,” XTC were basically a duo, with Partridge still the primary creative force and Moulding getting a few songs per record.

Partridge and Moulding had an interesting creative partnership throughout the lifespan of the band, but their collaboration as XTC was announced by Partridge as being in the “past tense” in 2006, possibly due to the bassist’s reluctance to participate in the multi-volume “Fuzzy Warbles” series of demos and outtakes.

Moulding and former XTC drummer Chambers released a four song EP as TC&I in 2017 and performed multiple sold-out nights in their hometown. The live sets included XTC songs, including some of Partridge’s (with his blessing), and the highlights were released as “Naked Flames: Live At Swindon Arts Centre.” But in 2019 Moulding announced that TC&I were over; he’d done it mainly out of curiosity but wasn’t interested in doing more in terms of recording or touring, preferring to spend time with his family.

At the same time, he gave Chambers his blessing to continue performing his songs, and with the greenlight from Partridge that leading an ensemble under the name EXTC would be just fine, there was hope that audiences outside of Swindon would see some version of XTC songs performed live, by at least one of the group’s original members. Now fronted by TC&I’s guitarist Steve Tilling, EXTC features original drummer Chambers on drums, Steve Hampton on guitar and vocals and Matt Hughes on bass and vocals.

Even if this horrible, neverending pandemic cancels the U.S. leg of EXTC’s tour (just as the bug killed the last two scheduled XTC conventions in Swindon), the intelligent and engaging music of XTC is still worth a relisten and reappraisal. But I sure hope to be in the front row at their City Winery show on March 30, singing along to some of the best songs ever written and recorded, by a group that overcame swinging in from an English backwater before pulling the plug on touring almost forty years ago.

We attended the LA show in ’83, THE DAY AFTER the San Diego show. The announcement came over the PA that Andy would not play. We lived in bummerville for a long time after that.

Before “Love on a Farmboy’s Wages” was “Paper and Iron” from “Black Sea.” I was lucky enough to see XTC open for The Police in the Fall of 1980. I liked The Police, but I went to see XTC. It was Andy’s birthday (27th?), and I thought they blew The Police off the stage.