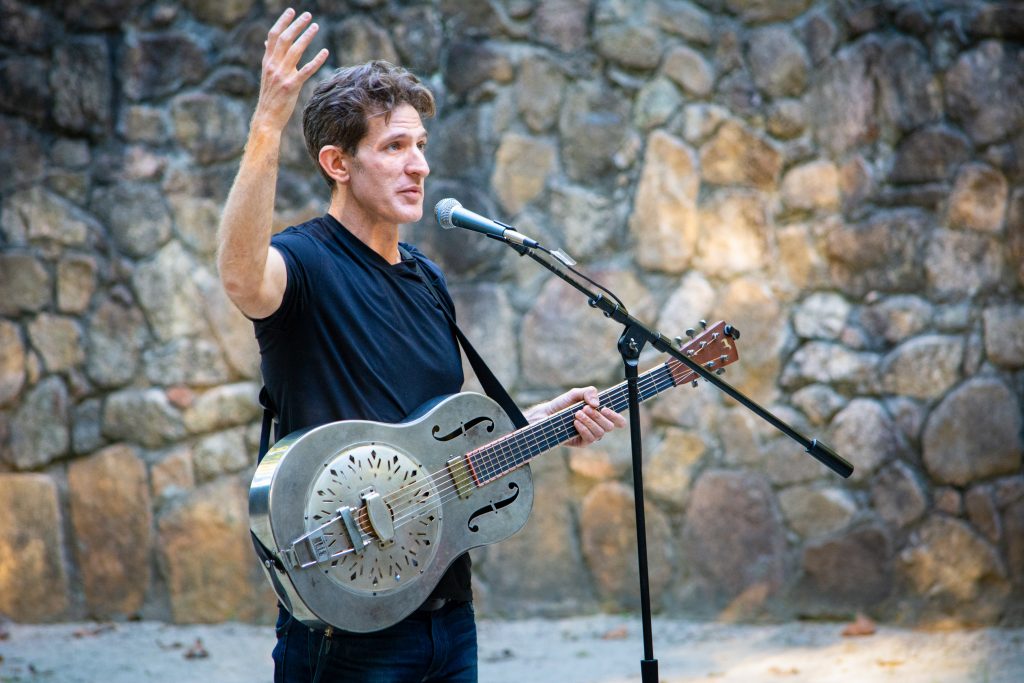 I spoke with Chicago singer-songwriter Joe Goodkin on the day Russia invaded Ukraine. I’d called to interview him about his remarkable new album, “The Blues of Achilles,” which retells the story of the Trojan War (or at least those parts covered in Homer’s “The Iliad”). “My first line is, ‘I sing of endless blood-soaked earth,’” Goodkin says, “and I turn on the news this morning and it’s like—right there.”

“The Blues of Achilles” is a set of seventeen songs, each sung from the point of view of one of the poem’s characters. The lyrics are specific to the war’s time and place, but resonate on a more universal level; Goodkin performs these tunes solidly in the American folk tradition, so if you don’t know the context, you might mistake them for songs of grief and loss from the Civil War, or Vietnam. I’m guessing, before too long, they’ll speak to this Ukrainian moment as well.

Goodkin is, of course, following a very long tradition of retelling “The Iliad” in ways that reflect the issues of the present moment. He’s careful, for example, to present more women’s voices than men’s. This requires some substantial invention on his part, especially with regard to two Trojan slaves, Briseis and Chryseis, who while pivotal to the story, are almost invisible in the original poem. “Chryseis doesn’t say a thing in the text,” Goodkin says. “She’s this linchpin in the story, so you can’t tell it without her. But she has no lines. So you can’t really say anything wrong. Part of what attracted me to the source material as inspiration is that there’s a universe inside almost every line, things that are left open for you to add your own filter… We really are heavily influenced by how other people have filtered it over two-thousand-plus years. But there’s so much that speaks to more ambiguity than people say. There are more voices in there, sometimes they just speak in different ways than we’re used to in our modern storytelling.” 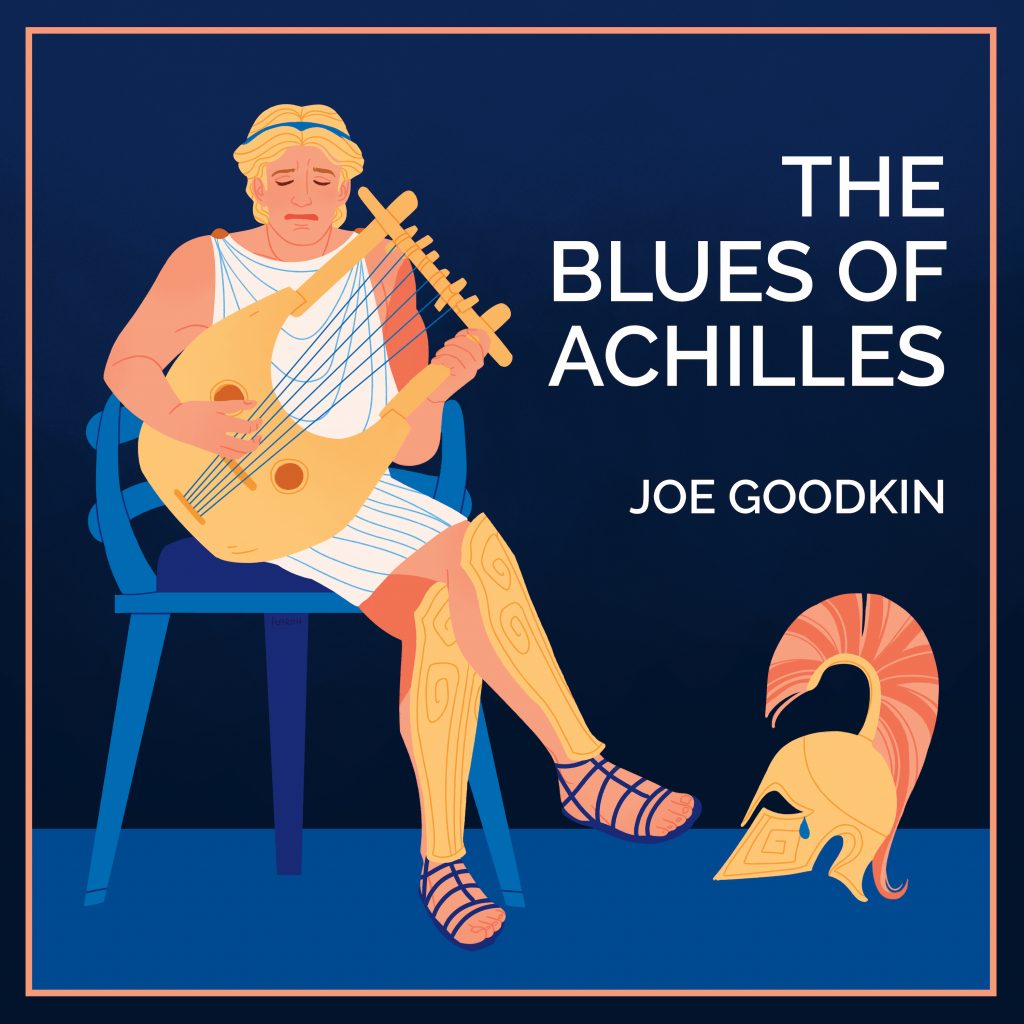 “The Blues of Achilles” follows by more than a decade Goodkin’s folk opera based on “The Odyssey.” As in that earlier work, he honors the performance tradition associated with Homer. “I wrote it as a solo performance piece. Both the emotional resonance and the parallel to one bard and a stringed instrument—that’s what I’m after as an ethos.”

But Goodkin departs dramatically from that tradition in the structure of the piece, which is entirely modern. He opens the cycle with an invocation that speaks in general terms about the persistence of war, then funnels into the specificity of Troy (“Stretching back as far as time / Long before the reign of Rome / I sing tonight and every day / For those who never made it home”). He then opens the narrative where Homer ended it, with Troy’s King Priam visiting the tent of Achilles to beg for the body of his slain son, Hector (“So think of someone who you love / Who might someday be like me / Grant mercy to my son’s body / And put it in my hands of grief”).

From that emotional flashpoint, Goodkin moves backwards through the narrative, essentially relating the events of “The Iliad” in reverse. It isn’t until he reaches all the way back to the poem’s beginning that he returns to Priam and Achilles in the tent, and we hear Achilles’ deeply moving reply (“Please father don’t you cry / I will help you stand / We’ll say a prayer together / And wash the grief off of our hands”). He then concludes with a reprise of the invocation, this time beginning in specificity (Hecuba’s grief for her son Hector), then expanding back into a macro view of war and its victims (“All of them were bone / All of them were blood / All of them were flesh / That somebody loved”).

This reverse narrative makes greater demands on listeners than the simple, linear line of earlier bardic tradition; but the payoffs can be revelatory. Throughout the cycle, we hear characters making promises, claims and declarations, and it isn’t until later that we realize these are often a response to something another character had said earlier. In the slave girl Briseis’ number, she sings, “I am a woman of the war / I have a song as strong as yours,” and it’s a powerful moment; but it becomes more so several songs later, when we hear Helen sing, “I became the woman of the war / When I took your hand and walked out my door.” We realize that Briseis wasn’t just defining herself—she was defining herself against Helen.

“Book 24 of ‘The Iliad’ has always been my favorite piece of literature ever: Priam and Achilles in the tent,” says Goodkin. “I make a joke when I perform that if we had just stopped literature after that, we’d probably still be in good shape.” Goodkin didn’t want to make audiences wait for that moment. “If you know what’s going to happen at the end, every step toward that, there’s a heightened sense of tragedy, there’s a heightened sense of awareness of how this is unfolding. So I thought, why don’t I put the end at the beginning, and then I do a reverse car crash and go backwards every step of the way.”

A further inspiration came from the many interviews Goodkin conducted with combat veterans in an effort to ground himself in their experiences and references. “For a lot of the veterans I talked to, war was two months of nothing happening, and then two minutes of the most intense experience anyone can have and then another month where nothing happens. So I thought it’s okay to be a little elastic with time in war, to distort it a little bit, to disorient people.”

One of the most surprising elements of the cycle is its love songs; they’re beautifully nuanced and affecting, and range beyond the expected romantic relationship to the maternal and even the fraternal. In fact, it’s that expression of filial devotion—sung by Agamemnon to his jilted brother Menelaus—that strikes me as the sweetest. “What kind of love is taller than a mountain / Richer than a crown of brilliant jewels / Sharper than a sword, straighter than an arrow / That’s my love for you.”

Goodkin recorded “The Blues of Achilles” in another ancient custom—analog to tape—with the near-legendary producer Steve Albini—“His studio is great; you can really hear the character of the studio in the recordings; I love the way he treated them.” The use of analog seems of a piece with how Goodkin views his art in general, and “The Blues of Achilles” in specific. “I call it anti-algorithm music, which is all I make. I heard somebody say recently that if you’re in this to be part of a tradition, a folk tradition, that’s the antithesis of the way music is distributed and addressed now. Traditions by definition take time. You have to wait for things to seep out, and people to pick up on them.” By that measure, “The Blues of Achilles” can hope for a long life. Not unlike its venerable source material.